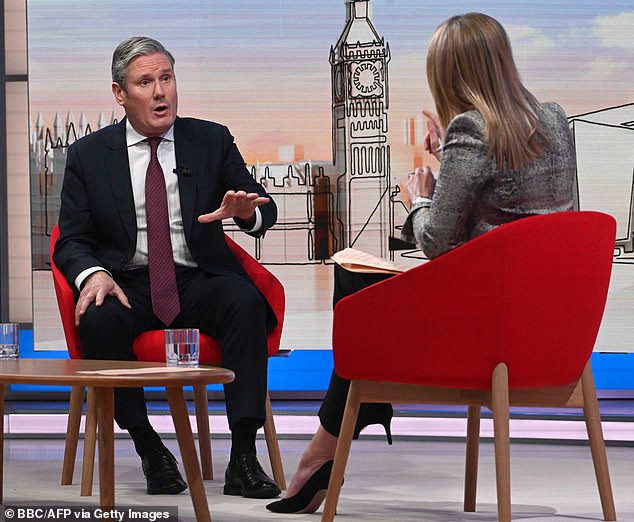 Sir Keir criticized a ‘ridiculous, chaotic circus’ as the Conservatives select a new leader for the second time this year, claiming that the electorate is ‘fed up to the back teeth’

In order to fulfill his objective of triggering a general election, which is now not scheduled until January 2025, he also sought to exploit Tory divides.

Some top Conservatives have indicated that they would resign from the party if Boris Johnson were to make a stunning return as prime minister and replace Liz Truss.

There are fears that a surge of resignations might prompt an early general election at a time when the Conservatives are far behind Labour in opinion polls.

There have even been rumors of some unhappy MPs defecting to Labour.

Sir Roger expected a flurry of resignations and maybe a succession of by-elections should this occur.

In order to bring down the Conservative administration and open the way for an early general election, only about 35 MPs would need to abandon the government in a Commons vote of confidence.

Those who will literally go along with this instability, as opposed to enabling us to move to a stable Labour government, are putting party before nation, which is the wrong order.

“We all have a responsibility to lessen the risk, and the best way to do it is through a general election.

This isn’t a game for those who are trying to pay their bills, whose mortgages are now more than they would have been, and who rely on the National Health Service.

And the more this continues, the working class and the general public are harmed.

Sir Keir is pushed by other opposition parties to call for a vote of no confidence in the Conservative government.

Ian Blackford, the Westminster representative for the SNP, has written to the Labour leader to inform him that he “cannot stand by quietly” during the Tory leadership election to succeed Ms. Truss.

Sir Keir stated this morning that a new government will have to clean up the economic catastrophe left by the Conservatives.

On BBC’s Sunday with Laura Kuenssberg, he stated, “I’m not going to publish our manifesto on this show.”

In a jab at the “ridiculous, chaotic circus” taking place within the Conservatives, he continued, “My attention is on the millions of people who are trying to pay their expenses and who now have extra concerns about their mortgage.”

Growing up, my family and I struggled to pay our bills.

They are really exhausted with this.