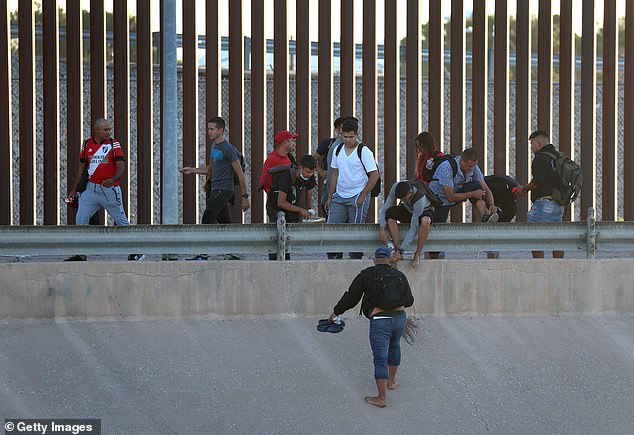 Kari Lake, a Republican running for governor of Arizona, said on Sunday that she had discussed setting up an interstate commission to monitor the border without the involvement of the federal government with the governors of other states.

Her commission would make it possible to establish a’sovereign’ law enforcement agency apart from the Customs and Border Protection department of the federal government (CBP).

Arizona, a border state in the Southwest, has been especially susceptible to the increase of asylum seekers entering the US since President Joe Biden assumed office.

Lake cautioned Biden against future legal challenges to her planned multi-state agreement and charged him with a “failure of leadership” that had resulted in a “invasion at our border.”

“I hope Joe Biden doesn’t oppose us because it would make it seem as if he is supporting the cartels,” Lake said CBS News, “and I don’t believe he wants the public to think that.

With less than a month before the November midterm elections, where Lake is involved in a close contest against Arizona’s Democratic Secretary of State, Katie Hobbs, Lake made an appearance on Face The Nation.

On her campaign website, she lays out a comprehensive strategy for bringing together ‘like-minded states’ to create a commission ‘to supervise joint activities along the U.S.-Mexico border, commencing in Arizona.’

According to the statement, “The agreement will make it very apparent that the states are sovereign and have every authority to safeguard the borders of the United States.”

It follows the prior fiscal year, which recently concluded on September 30, when border officers encountered more than two million individuals attempting to enter the US.

Lake said on Face The Nation on Sunday that the US Constitution supports her authority to create the “interstate commission” if she wins the governor’s election.

According to Lake, Joe Biden’s lack of leadership is making it difficult to understand how the federal government is protecting us against invasion as required by Article 4, Section 4 of the Constitution.

Therefore, in order to take care of and secure our own border, we will use our Article One, Section 10 jurisdiction. The Constitution clearly states this in plain and white. We have an invasion, our people are in immediate danger, and time is of the essential, so we satisfy all three requirements.

Lake said, “Yes, we will,” when asked whether Arizona would be willing to make the independent declaration on its own. But I think we’ll receive some assistance. I’ve already spoken to a few other governors, and they’re promising to assist us in any way they can.

The Republican media figure also didn’t back down in the face of the potential for legal action.

If they’re going to challenge us, we’ll confront the federal government, Lake said.

We have the right to do this, in my opinion. Additionally, we will hire lawyers to file court cases. However, we won’t back down and watch as our children perish while allowing our population to be overrun by narcotics.

In defiance of current federal law, it would have the power “to arrest, imprison, and deport illegal aliens back over the border.”

Lake’s border force would inform the Department of Homeland Security, which runs CBP, and report to the legislators of the participating states.

It’s unclear to what state officials Lake has talked about the proposals.

According to a recent CNN survey conducted last week, Lake is only behind Democrat Katie Hobbs in the race.

Neither candidate, Hobbs with 49 percent of the vote and Lake with 46 percent, was able to secure a majority of the vote, however.