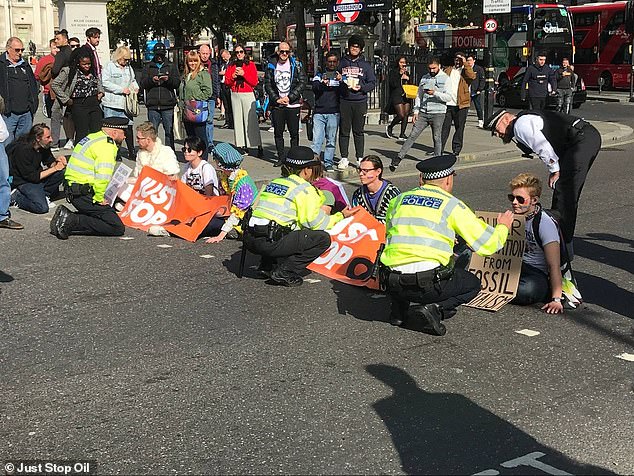 For the sixth day in a row, Just Stop Oil demonstrators stopped roads around Trafalgar Square this afternoon as they created mayhem across Central London.

To continue their demand that the government halt all new oil and gas projects, some 32 protesters took to the Tarmac, where they sat down with banners and taped themselves to the surface.

The organization said that many groups were active on other roadways, and the Metropolitan Police verified that 25 persons had been detained as of 1:23 p.m.

Additionally, Just Stop Oil said today that seven gay individuals had created one of the obstacles. To express their unashamed queerness, they are dressed in drag.

Following daily demonstrations since Saturday, the group has been blocking roads around Parliament Square, Waterloo Bridge, and other Central London locations.

Just Stop Oil also said that five of its protest participants—Simon Milner-Edwards, Margaret Reid, Michelle Charlesworth, Barry Mitchell, and Joshua Smith—were currently either on remand or serving jail terms as a result of their involvement in demonstrations.

Elliott Cuciurean and Scott Breen were also mentioned as being imprisoned for their respective roles in protests against HS2 and the Southampton to London pipeline, respectively.

The veteran LGBT rights activist Peter Tatchell, 70, was cited as stating in a news release announcing the protest: “There is no use in advocating for LGBT+ human rights if we don’t have a world where we can enjoy them.

Climate change poses an existential danger to the continued existence of LGBT humankind. Heroic queer activists from Just Stop Oil are battling the climate scofflaws to stop ecocide in the style of LGBT+ direct action by organizations like OutRage! They deserve our respect and assistance.

Oliver Clegg, a 19-year-old demonstrator from Manchester who is a student, added: “Queer people have never stood by while injustice has occurred, and we’re not going to start.” LGBT people have and still do challenge the rules that restrict us.

We have had to work for the privileges we currently enjoy; nothing was ever given to us. The conflict is still ongoing.

“People who are already marginalized, especially gay people, are disproportionately affected by the climate problem.” The global warming disaster is a queer issue, and we won’t just watch it happen.

‘We are in an economic and environmental catastrophe, with oil firms generating enormous profits while climate collapse runs out of control, and regular people can’t afford to live,’ said demonstrator Cat Acheson, 27, a sustainability research student at the University of East Anglia.

“I’ve had enough. We need a redistribution of wealth, a stop to all new fossil fuel extraction, and clean, inexpensive energy for everybody.

At 12:33 PM today, a Metropolitan Police spokeswoman tweeted, “We are aware of current protest activity in Central London.”

Protesters are obstructing traffic at the top of Whitehall, close to Trafalgar Square, after they glued and tied themselves to the asphalt. Police are rushing to the location to evict protesters; we’ll keep you informed.

The police department added: “So far, we have detained 25 persons for intentional blockage of the roadway” in an update at 1:23 PM.