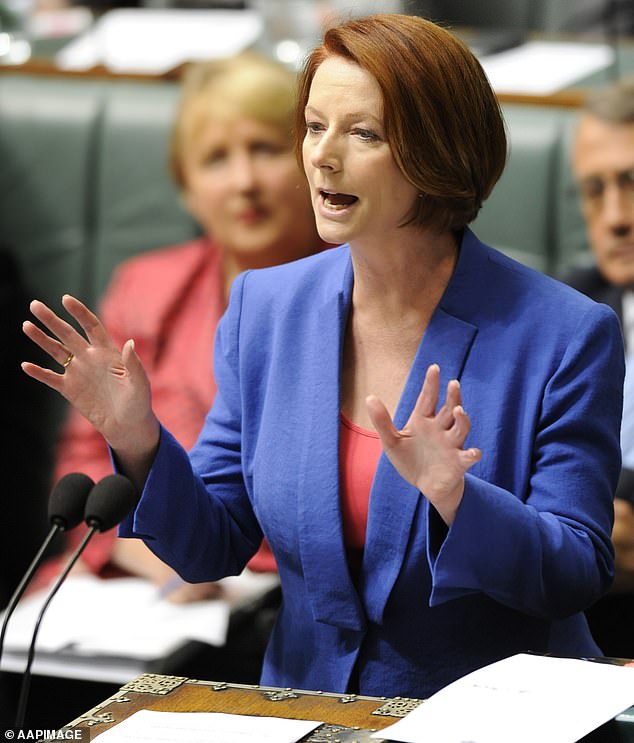 Ten years after her “misogyny speech” aimed at Tony Abbott made her a hero to many people across the globe, Julia Gillard is still teaching male politicians a lesson.

Despite some good developments since she held the position of prime minister, Australia’s first female leader said on Sunday on The Project that sexism still exists in the country.

The show’s host, Lisa Wilkinson, made a sly jab at Ms. Gillard’s successors in Australia by saying that everyone might benefit from her example.

Wilkinson said, “Julia, you have received credit for being the greatest type of ex-prime minister since leaving politics — dignity, humility, grace, and not participating in the daily political cycle.”

Have Kevin Rudd, Tony Abbott, or Malcolm Turnbull ever called you up to ask you how you do anything specifically?

‘No. To the panel’s amusement, Ms. Gillard said, “I’m not teaching a course.

After their various terms as prime minister, Mr. Turnbull, Mr. Rudd, and to a lesser degree Mr. Abbott, have all continued to voice their thoughts on current events.

Since leaving office in 2013, Ms. Gillard has worked in activism and philanthropy, and she said that while the “misogyny speech” has “reverberated” throughout the globe, more needed to be done.

She said, “Misogyny is not fixed.” “There are still many things we must alter,”

We are aware that violence against women, domestic abuse, and gendered hurdles in the workplace still mostly feature male faces at the top of our society’s hierarchies, whether they be in business or politics.

There is thus much to do. Of course, social media has its own set of problems.

She disclosed for the first time that the famous statement, in which she dismissed a question from Mr. Abbott in parliament in October 2012 by declaring that she would not be subjected to a “lecture on sexism and misogyny by this guy,” nearly didn’t take place.

Ms. Gillard describes how her advisers were taken aback when she said, “I’m going to take the reply,” in her new book Not Now, Not Ever, which is about the speech and what has to be done to fight sexism.

Normally, Ms. Gillard added, “I put myself above these routine political methods.”

“I debated doing it, thought about not doing it, and then decided I would because I was tired of all the – there was another term – but I’ll use the word gibberish.

Despite receiving an almost instantaneous outpouring of congratulations when she returned to her office, Ms. Gillard said that it wasn’t until much later, on a trip to India, that she fully realized the speech’s long-lasting and universal significance.

A policewoman from India told me, “Great speech,” and Ms. Gillard recalled thinking, “Wow, this isn’t just flowing through the media in different areas of the globe; this is being observed by women throughout the world.”

That gave me the impression that it may be around for a lot longer than I first thought.

The speech has inspired a ton of memes and was allegedly a favorite that was often repeated in the Obama White House, particularly when dealing with Mr. Abbott.

One improvement, according to Ms. Gillard, is that sexist behavior is now more likely to be exposed and called out.

She said that it was “hard to fathom” that a woman in the legislature today could be called the things she had been without their being a scandal and negative political repercussions.

At a demonstration against the Gillard administration’s carbon price, Mr. Abbott was famously seen speaking while holding a poster that said, “Ditch the Witch.”

Another notorious incident occurred when shock jock Alan Jones said that Ms. Gillard’s recently deceased father, John, had “died of shame” as a result of the falsehoods she was speaking at a speech that he believed was not being recorded.

A record number of women were elected to parliament in the May federal election, which confirmed Ms. Gillard’s belief that women’s views and interests were increasingly influencing federal politics.

Younger women must now take up the slack, according to Ms. Gillard.

“I believe that there are young ladies who want to grasp the baton and run with it rather than just accept it.”

This next generation is very strong.

What was mentioned during the speech sexism?

On October 9, 2013, Ms. Gillard addressed a resolution to remove Tony Slipper as Speaker of the House of Representatives, which was introduced by Tony Abbott, the leader of the opposition at the time.

Mr. Abbott said that the government “shamed parliament” and should have perished in “shame” for defending Mr. Slipper, who was accused of sexually harassing a staff member.

Thank you very much, Deputy Speaker, and I stand to oppose the motion made by the Leader of the Opposition, Ms. Gillard retorted.

And in doing so, I declare to the Leader of the Opposition that I will not listen to this guy lecture me about sexism and misogyny. No, I won’t.

And this guy will not lecture the government about sexism and misogyny. Never, not right now.

“The Leader of the Opposition claims that sexist and misogynistic individuals should not occupy positions of power.” I do, however, hope that the leader of the opposition has a piece of paper in hand and is resigning.

Because “he doesn’t need a motion in the House of Representatives, he needs a mirror if he wants to see what sexism looks like in contemporary Australia,”

She said, “I was outraged when the Leader of the Opposition walked outside in front of the Parliament and stood next to a poster that stated “Ditch the witch.”

“I found it offensive that the Leader of the Opposition was standing next to a placard that called me a man’s bitch,” the woman said. Those things hurt my feelings.