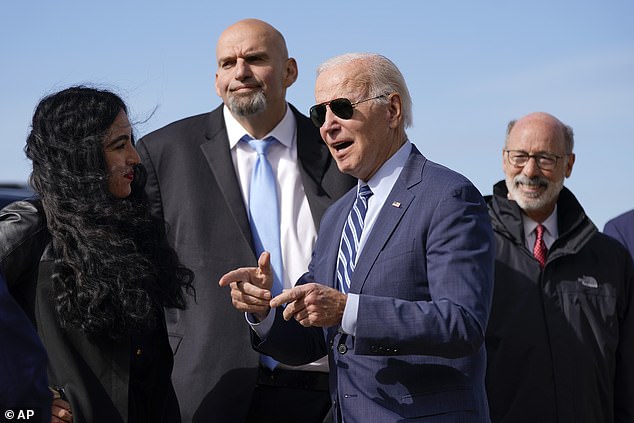 John Fetterman, a Democratic Senate candidate from Pennsylvania, made light of his stroke on Thursday night at a Philadelphia fundraiser with President Joe Biden.

The candidate, who had a stroke in May, took advantage of the situation to criticize Dr. Mehmet Oz, the Republican nominee who has Donald Trump’s support.

Oz often challenges Fetterman’s health in campaign appearances and advertisements. After the midterm elections in November, their close contest may determine which party has the majority in the Senate.

Fetterman then turned to attacking Oz’s qualifications as a doctor.

Ask yourself this: what sort of doctor wants a patient to be ill?, he advised. “Occasionally, I’ll miss a word or mash two words together.”

I’ll feel a lot better in January, but Dr. Oz will still be a fake, he said.

He will say anything in exchange for money or a vote.

Despite having had a stroke only days before, Fetterman handily defeated his Democratic rivals in the primary for the Senate in May.

But his health is becoming a major point of contention in the Senate contest.

After initially declining to do so, Fetterman published a fresh doctor’s note on Wednesday stating that although he was still experiencing some difficulties with “auditory processing,” his “communication has considerably better.”

Last week’s NBC interview, which demonstrated how Fetterman employed closed captioning, rekindled interest in his stroke. To help him comprehend the questions posed to him, the closed captioning actively captioned the interview.

To spend the day with the president in Pennsylvania on Thursday, Fetterman dispensed with his signature sweatshirt and wore a suit instead.

In order to discuss the upcoming infrastructure money for the state, the two men went to the location of a fallen bridge in Pittsburgh.

Before traveling to Philadelphia for the benefit, they also stopped at Primanti Brothers in Moon Township, a popular sandwich restaurant in the neighborhood.

At the fundraiser, when Fetterman addressed the Democrats, he made jokes about his health. Cameras were not permitted inside, although a few reporters were.

The reason the elephant in the room exists is not because I’m dressed in a suit, he said. But as you are aware, I had a stroke. I had a stroke in May.

He said that despite his desire to continue with his intended activity while denying he was experiencing a stroke, “luckily they got me to the hospital soon.”

“I really had to think about death and all these things.” It’s rather disconcerting,’ he added.

Fetterman predicted a tight battle with Dr. Oz, noting that the GOP candidate has been gaining ground on him in polls.

“Please send Dr Oz back to New Jersey and send me to DC to be that 51st vote,” he pleaded with the throng.

President Joe Biden also issued a warning about what would happen if Democrats lost control of the Senate.

At the fundraiser, Biden cautioned the Democrats, saying: “If we lose this off-year election, we’re in big danger.” America is really at a turning moment.

He even made a few jabs at Dr. Oz, a competitor of Fetterman’s.

Oz attended high school there, but “Delaware was clever enough to send him to New Jersey,” he said.

He said that Oz “is for erasing all we have done.”

He also reiterated his critique that a sizable portion of the Republican Party consists of Trump-loyal “MAGA Republicans.”