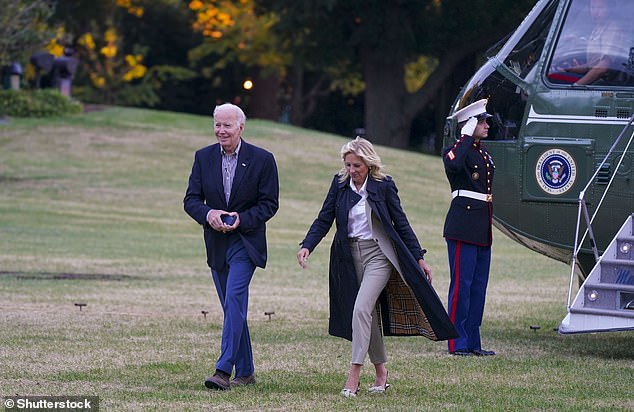 Jill Biden’s role in the midterm election will be similar to her husband’s when she embarks on a four-day, multi-state trip on Wednesday: she will highlight the administration’s successes as well as her own policy agenda, rally the party faithful where she can, and raise money for the campaign.

The first lady is anticipated to increase her travel related to her well-known portfolio of topics — education, cancer, and military families – with less than a month before the November midterm elections.

According to a top Biden staffer, Jill will also promote the idea that “Joe is producing results,” collect money for the party, and sometimes appear with Democrats running in close races.

Jill Biden may be an antidote to her husband Joe Biden’s unpopularity as he struggles with an approval rating in the low 40s and Republicans seem poised to gain control of the House.

She may stand in for his successes while bringing her own unique perspective to the table when discussing topics that are near and dear to her.

She must decide which candidates are prepared to stick with her, just like President Biden.

At formal events centered on policy topics, such as infrastructure, the Inflation Reduction Act, or the CHIPS Act, Democratic candidates have been more eager to participate with the Biden team.

That approach is ideal for first women, who can advance policy while putting politics aside. Over the course of her husband’s extensive political career, Jill Biden in particular has grown to be a formidable campaigner.

This week, she will speak about education in Wisconsin on Wednesday, promote COVID boosters in Tennessee, host Joining Forces-related activities for military families in Georgia on Thursday and Friday, and promote cancer research in Florida on Saturday.

Biden’s policy-related engagements get a lot of local media attention, which is helpful for candidates in competitive elections.

On Wednesday, Democratic Governor Tony Evers of Wisconsin, who is running for re-election, will be present when Jill Biden meets with parents, teachers, and kids at a Milwaukee Public Schools event.

And Jill Biden will be joined by Senate candidate Mandela Barnes at another event in the state. Barnes is attempting to oust Republican Sen. Ron Johnson, who has often criticized the Bidens and their son Hunter.

At a meeting with the Milwaukee Teachers’ Education Association, the first lady, who has taught for 30 years, will be joined by him and his mum, a retired teacher.

First women often serve as well-liked ambassadors for their husband’s government, especially when the president is struggling with poor popularity ratings. On the campaign trail, there was a lot of interest in Michelle Obama and Laura Bush.

According to Biden aides, Jill Biden is a highly sought-after surrogate who will participate in the midterm elections.

According to a top Biden staffer, “the First Lady is one of the most sought-after surrogates and there are numerous calls for her to campaign this fall in competitive states around the nation.”

She will remain active during the midterm elections and spread a message of positivity and hope by emphasizing the successes of her husband’s administration. She will often say on the campaign trail, “Joe is delivering results,” citing his accomplishments and urging people to consider what more he may be able to do with stronger majorities in Congress, according to the advisor.

As Democrats battle to maintain control of Congress, authorities are still figuring out Jill Biden’s itinerary for the next month as they consider where she, President Biden, and other government officials will be most useful. The agenda of President Biden will be thwarted for the next two years if either the House or the Senate are lost.

Democratic Senate candidate John Fetterman of Pennsylvania, whose campaign has said he would appreciate a visit from Jill Biden, a Philadelphia native, is one contender that wants Jill Biden.

A campaign representative told DailyMail.com, “Of course the Fetterman campaign would welcome a visit from Jilly from Philly.”

But as circumstances have changed, the first lady’s job has evolved to become more political.

According to Princeton University professor Lauren Wright, an expert on presidential spouses, “first women bring a spotlight everywhere they go” and “the East Wing is getting more political over time in general.”

We should take spouses seriously as political participants because they have traditionally been among the most engaged and successful campaign and policy surrogates. However, some of that scrutiny is also probably the result of a more politicized political atmosphere in general.

Any surrogate nowadays will find it challenging to become well-known or keep it, she added.

Melania Trump, who avoided politics as much as she could and hardly engaged in husband Donald Trump’s campaign, was the catalyst for that transformation.

Melania Trump was considered to be a risky candidate to support in a close contest and on the campaign trail. She struggled initially because of her lack of prior campaigning expertise. But secondly, if it’s a very close campaign, her husband’s unpopularity attached to her too,’ remarked Katherine Jellison, an expert on first women and professor at Ohio University.

And to a lesser degree, she said, “it may be the same scenario here with Jill Biden.” The fact that at least 50% of voters disapprove of her spouse because they see her as being too much of an extension of him And it is believed that she has contributed to part of his fame.

Jill Biden will spend her time collecting money for the Democratic Party as the election draws near. A Democratic National Committee event will feature the first lady on Wednesday in Nashville.

She has shown to be a successful fund-raiser. Last week, her fundraiser in San Francisco with Speaker Nancy Pelosi pulled nearly $1.6 million for House Democrats.

A DNC employee claimed to have raised “millions” for the party, according to DailyMail.com.

According to the source, “First Lady Jill Biden is one of the Democratic Party’s most significant fundraisers and surrogates, including being a key magnet for grassroots supporters.” She has participated in nine DNC fundraising events in this year alone. Millions of dollars have been raised for the DNC by her via events, emails, SMS, and direct mail to assist Democrats at all levels of the ticket.

Biden has previously participated in political campaigning. She organized a fundraiser on Saturday for Senator Patty Murray, a Democrat, and the two participated in an event.

Murray has a respectable D grade from the Cook Report, making him a safe bet for reelection. The first lady’s trip to blue states, however, has the potential to increase Democratic support, spread the Get Out the Vote message, and raise much-needed funds for a campaign.

On Wednesday, President Joe Biden began his own multi-state trip, which will take him to the west coast to discuss infrastructure, the environment, and decreasing expenses for American families.

He will also campaign for a select candidates and hold fundraisers. Democratic Senator Michael Bennet will be at his side when he makes a swing in the battleground state of Colorado on Wednesday to declare Camp Hale a national monument.

During midterm elections, the president’s party often loses seats in Congress. Along with the president’s poor support ratings, which are mostly related to the economy and the high cost of living, the Bidens are combating these challenges.

To maintain that, the president, first lady, and entire team will be out in full force on the campaign trail, praising the well-liked aspects of the administration’s agenda (infrastructure, increases in manufacturing, and climate and health issues), and raising the money required to keep campaigns going.