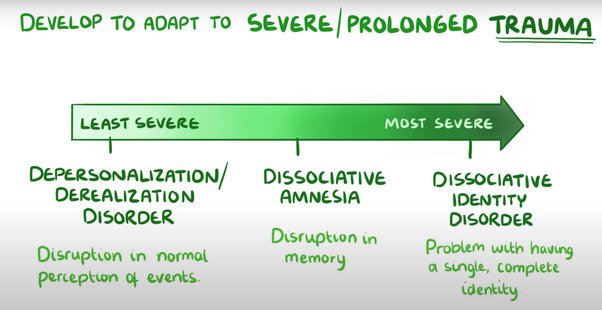 Some people cope with their distress by actively fleeing reality, or dissociating, when traumatic events, such as chronic abuse or neglect, are too severe to bear.

Dissociation is a mental process characterized by disconnection from one’s own ideas, memories, emotions, and sense of self. If you have dissociative identity disorder (DID), dissociation entails flipping between alternative identities or states of awareness.

According to Shari Botwin, a licensed clinical social worker in private practice who has treated persons with DID for more than 26 years, this complicated mental health disease is largely misunderstood due to incorrect media depictions.

Before 1994, DID was referred to as multiple personality disorder. The name change, according to Botwin, highlights the notion that people with DID do not switch personalities, but rather lack a single, coherent identity.

According to Botwin, numerous myths regarding DID maintain the stigma around this disorder. She dispels some of the most prevalent myths below.

Myth 1: DID is uncommon

In actuality, approximately 1.5% of the global population is affected by DID. This percentage may seem little, but to put it in perspective, it represents more than four times the number of people diagnosed with schizophrenia globally.

In addition, as DID is frequently misdiagnosed as a personality disorder or stays untreated, the true prevalence of this syndrome may be substantially greater.

Botwin states that certain groups may be more susceptible to DID. As an example, up to 6% of extremely traumatized patients in inner-city hospitals are diagnosed with DID. High rates of oppression and trauma are prevalent among inner-city residents, particularly those with minority identities, according to researchers.

Identity swapping is the only symptom of the disorder

People with dissociative identity disorder have two or more separate personalities, known as “alternates” or “alters.” Typically, each alter has its own name and personal background, as well as its own personality, mannerisms, and preferences.

Alters can take over your thoughts, behaviors, and behavior at different times if you have DID, and you may or may not be conscious of these identities. Rarely will you recall what occurred while an alter was in charge.

Movies and television shows frequently portray identity changes. In reality, according to Botwin, these changes occur so gradually that individuals who don’t know you well may not even notice them, especially if the alter does not have distinguishable speech patterns, mannerisms, or body language.

While alters are the most well-known symptom of DID, Botwin notes that the following are also common:

Amnesia, or memory gaps
Derealization, or the sensation of being separated from oneself or one’s feelings
Incapacity to deal with stress
Depression
Anxiety
Suicidal or self-harming ideas

Importance: If you are having suicidal thoughts, help is accessible immediately. Calling 988 to reach the Suicide and Crisis Lifeline or texting “HOME” to 741741 to access the Crisis Text Line will connect you with compassionate crisis counselors who will offer free, confidential support.

Myth No. 3: Dissociation is merely another name for DID.

Dissociation can also occur in conjunction with the following dissociative disorders:

Dissociative amnesia is a dissociative illness characterized by memory gaps regarding personal information, such as actions taken, events experienced, and even acquired skills.
Depersonalization-derealization disorder (DPDR): This dissociative disorder is characterized by intense out-of-body experiences in which you may feel as though you are seeing your own thoughts, feelings, and actions from a distance.

But experiencing dissociative symptoms does not indicate that you have DID or any other dissociative illness. In fact, according to Botwin, she has counseled scores of individuals who developed a tendency to disassociate intermittently after experiencing or witnessing abuse as a child.

Dissociation can also occur with the following mental health conditions:

Additionally, some study indicates that dissociation may be a symptom of attention deficit hyperactivity disorder (ADHD). During seizures, patients with epilepsy may also feel dissociation.

Lastly, you may experience dissociation after using certain psychedelic medications, such as:

PCP\sKetamine
The cough suppressant dextromethorphan (DXM) in excess of label instructions.
Myth 4: DID sufferers are violent

Frequently, Hollywood depictions of DID involve a scary or angry alter.

“This misperception contributes to the stigma surrounding DID,” explains Botwin.

According to Botwin, there is no evidence to indicate a correlation between DID and an increase in criminal or aggressive behavior.

“In reality, many clients with DID channel their rage inward through destructive behaviors like as cutting and eating disorders. Some clients have reported hearing voices from their alters that say, “You are a nasty person” or “You deserve to endure agony.” Trauma survivors with DID are significantly more likely to damage themselves than others “Botwin explains.

In her book, Thriving After Trauma, Botwin elaborates on the effects of traumatic events.

DID is a personality disorder, according to Myth 5.

Both personality disorders and DID can emerge in reaction to stressful experiences, according to Botwin.

However, the Diagnostic and Statistical Manual of Mental Disorders categorizes DID as a dissociative disorder, not a personality disorder, and the two disorders do exhibit many different symptoms.

Those affected by personality disorders:

In contrast, individuals with dissociative disorders such as DID:

In spite of the foregoing, it is possible to be diagnosed with both DID and a personality disorder, and if you do, you may have even greater overlap between the two sets of symptoms.

Sixth Fallacy: DID cannot be cured

Botwin adds that while there is no “cure” for DID, the proper treatment can help manage and even dramatically reduce symptoms.

Psychotherapy is the most prevalent treatment for DID. Many of Botwin’s clients have learned via therapy to:

Deal with traumatic recollections connected with alternate identities.
Utilize alternative stress coping skills to reduce dissociation.
Merge some of their distinct identities, or at the very least, find ways for them to coexist in peace.

One of Botwin’s clients, for instance, recognized that some of her younger alternate identities had contributed to her eating condition. She recounted childhood recollections of feeling ignored, unnoticed, and vulnerable throughout their therapy sessions. She eventually recognized that the alters had contributed to her eating disorder in an attempt to win her parents’ attention.

Multiple methods of therapy can be used to treat DID. Among the most prevalent ways are:

Dialectical behavioral therapy (DBT): This technique offers skills to help you regulate your emotions, remain grounded in the present, and self-soothe, all of which can help you cope with discomfort so that you are less likely to disassociate.

Cognitive behavioral therapy (CBT): This type of therapy can assist you in identifying and altering negative thought patterns that may contribute to dissociation, hence reducing symptoms. For instance, according to Botwin, CBT may enable you to modify negative ideas about specific identities in order to progressively incorporate them.

Psychodynamic psychotherapy: According to experts, people with DID frequently dissociate as a means of “switching off” and detaching from emotionally overwhelming circumstances. Psychodynamic therapy emphasizes acquiring a deeper understanding of problematic ideas, thoughts, and emotions; therefore, if you have a tendency to avoid or repress difficult emotions, your therapist can help you learn to accept and express them.

Eye movement desensitization and reprocessing (EMDR): In this technique, a therapist directs your eye movements in a certain manner as you access traumatic memories and the alternate identities linked with them. The objective is to replace negative ideas about these triggering experiences with neutral or good ones, so that dissociation is no longer necessary.

This strategy entails discovering and comprehending your “schemas,” or maladaptive coping mechanisms you may have formed as a result of childhood neglect or abuse.

Hypnosis may also have advantages; in fact, according to a 2022 study, individuals with dissociative disorders are frequently easier to hypnotize than others. Hypnosis may assist you in gaining access to different identities, fostering communication between them, and discovering techniques to control the transitions between them.

Although your doctor may give antidepressants or other medications to alleviate symptoms such as depression and anxiety, pharmaceuticals cannot prevent or treat dissociation directly.

DID is a complex, commonly misunderstood disorder that is frequently caused by traumatic childhood experiences. In addition to shifting between several identities, other symptoms can include memory lapses, despair, and a sense of being alienated from oneself or the world.

Even though there is no definitive cure for DID, Botwin highlights that there are strategies for controlling and alleviating symptoms. Numerous treatments, including psychotherapy, hypnosis, and medication, can make a difference.

“Many of my DID-afflicted clients are also professionals, parents, and spouses. People with DID can live happy and productive lives “Botwin argues.

Rebecca Strong is a freelance writer located in Boston who writes on health and wellness, food and wine, fitness, and travel. She has also written for Insider’s Health Reference and Kitchen verticals, as well as Healthline, Health magazine, Bustle, StyleCaster, PopSugar, AskMen, and Elite Daily. Her work can be followed on Twitter.