Skip to content
Go Home «» News «» Science News «» Is it safe to swim with a wild dolphin? 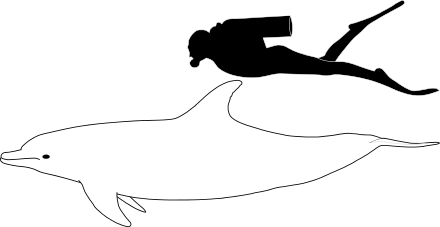 At 14 years old me and my best friend were hanging on the beach and saw a dolphin at about 250/300 meters (820/ 980 fts) from the shore. As we were both athletic and very good swimmers, we jumped onto the sea to go greet “Willy” and try to swim with him.

As we approched, we realized it was not one of those tiny Grey dolphins but, rather, a large dark grey/blued one. It was a very, very BIG creature, around 3 meters (9.84 fts) long and obviously heavy, strong and powerful.

We managed to approach and gently stroke him and he seemed interested by us so it was quite cool at this point. Even if its bigness made us quite anxious, our curiosity prevailed.But then it’s behavior began to shift from curiosity toward us to… nervousness or maybe excitation. It started to “play” with us, swimming fastly away to go back rushing on us, diseappearing underwater to go under us using its nose to move and shake us.

At this point I totally panicked, I realized, here we were. Far away from the shore, with at least 10 meters (32.8fts) of water under our feets and this enormous and umpredictable creature diving and popping up on us as we had zero visibility underwater.

We began to rush to the beach swimming our hearths out and he followed us, still diving under us and popping up from nowhere .

He emerged one more time to jump back into the sea, he knocked me down with its tail pushing me far underwater. I was dizzy, hurt and panicked but I managed to emerge and, very luckily, he left. With my friend help, we finally reached the beach. I was shaking and crying… I could have drowned.

I will never forget this feeling of vulnerability, being at the mercy of a wild animal and the distress I feeled each time he was diving and I could not know were it was.

He was in its element and we were not. We asked for problems..

After research, we found out it was an Atlantic bottlenose dolphin. “Tursiops truncatus”. Here is an image of its heights compared to an average human. It’s size goes from 2 to 4 meters long (6.6 and 13.1 ft) and weight between 200 and 500 kg (440 and 1,100 lb).Below an image comparing it with an average human.

»Is it safe to swim with a wild dolphin?«