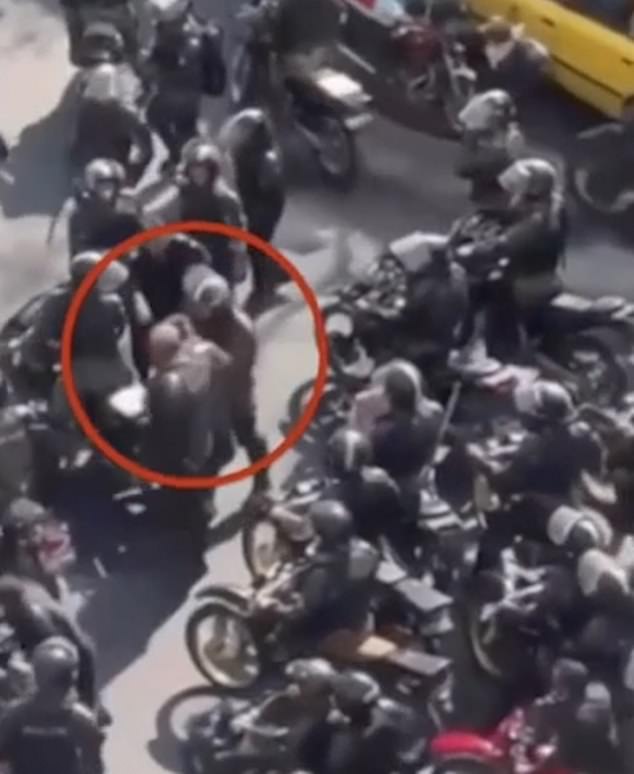 In the most horrifying footage to emerge from the month-long riots that have torn across the Islamic nation, Iranian riot police are shown sexually abusing a female demonstrator.

According to the BBC, the video was shot on Wednesday in Argentina Square in Tehran and shows a lady being kidnapped and led toward a motorcycle on a busy area filled with police.

Four armored police officers surround the woman from all sides, and one of them seems to grasp her improperly from behind with a forceful hand. Then she collapses on the ground.

They are tugging her hair, a female voice can be heard saying from behind the camera.

Passing vehicles start honking their horns loudly at this moment, a familiar sound and symbolic action that expresses support for the movement.

According to the BBC, the victim eventually gets to her feet and flees from her tormentors.

The same voice is heard on the video tape, allegedly stating, “Look at him [the security force officer], he is laughing.”

According to official news agency Irna, Tehran’s Police Public Relations office has confirmed that they are aware of the event and would be looking into it in a rare display of responsibility.

The ultra-conservative and austere Iranian dictatorship will not want to seem to accept sexual assault, despite the routine violence of its police force.

Police sexual assault “is a multiplicity of offenses and is subject to Articles 619 and 637 of the Penal Code,” said law expert Mohsen Burhani.

While some social media users have used the hashtag #violence to demand the ouster of Iranian police head Hossein Ashtari, others have simply reaffirmed their commitment to protesting the government despite whatever persecution they may endure.

I can speak about the oppressive forces’ attack on that lady for hours, one user said. But when I’m angry, I shut my mouth and grit my teeth, keeping my rage within until I need it.

Another pointed out the hypocrisy of the government for professing to combat the terror organization but acting like them by comparing the actions of Tehran’s uniformed police to those of ISIS supporters in Syria.

A other video shows a lady wearing a red shawl being mobbed by riot police as she attempts to step in to defend an elderly woman being bullied by security personnel.

She is initially restrained by an unarmed guy; afterwards, she is roughly dragged from behind and thrown to the ground by another man who is wearing protective gear and carrying a shotgun.

The newest thing to infuriate Iranians about the torture they must endure at the hands of their own government is the videos.

Another footage showing fleeing demonstrators being shot upon by a device placed on the back of a pick-up vehicle surfaced yesterday.

Shots can be heard as the car pursues protesters in Baneh, in the Kurdistan region in the east of Iran, according to the video, which the BBC Persian service has confirmed. This indicates that the government is intensifying its brutal suppression of widespread rallies.

Amini was killed on September 16 after being detained by the morality police for allegedly violating the severe dress code for women in the Islamic republic, setting off a month of protests that have shaken Iran.

Young ladies and schoolgirls have been taking to the streets every night, raising their fists while yelling, “Woman, life, freedom,” and “Death to the tyrant.”

As US President Joe Biden expressed his support for “the heroic women of Iran,” Iranian protestors called for new statewide rallies on Saturday.

Young women have been leading the demonstrations, yelling anti-government chants, taking off their head coverings, and fighting with police officers in the streets.

With the catchphrase “The beginning of the end!” activists launched an online call for a massive turnout for demonstrations on Saturday despite the internet’s blocking of services and platforms like Instagram and WhatsApp.

In order to protest Ayatollah Ali Khamenei, they have urged Iranians to gather in public places where security personnel are not present and cry, “Death to the tyrant.”

In reference to virtual private networks, which are used to get around internet censorship, they proclaimed, “We have to be present in the squares because the best VPN these days is the street.”

The US president expressed shock at the widespread protests, which are now in their fifth week, and expressed sympathy for the demonstrators.

Biden stated late on Friday, “I want you to know that we stand with the people, the heroic women of Iran.”

“What it awoke in Iran astonished me.” It awoke something that, in his opinion, won’t be quieted for a very long time.

Women are oppressed in many ways all around the globe, but Biden said that women should be free to dress as they like in the name of God.

He said, “Iran needs to stop the violence against its own people who are only practicing their basic rights.”

According to the Oslo-based organization Iran Human Rights, at least 108 people have died in the Amini demonstrations, and at least 93 more have perished in separate skirmishes in Zahedan, the capital of the southeast province of Sistan-Baluchestan.

Despite what Amnesty International described as a “unrelenting savage response” that included a “all-out onslaught on young demonstrators” and resulted in the deaths of at least 23 children, the disturbance has persisted.

The brutal crackdown has prompted widespread criticism and fresh sanctions against Iran from the United States, Britain, and Canada.

The adversaries of Iran, especially the United States and Israel, have been charged with inciting the “riots,” according to the country’s supreme commander.

President Emmanuel Macron of France was criticized by Khamenei’s regime on Friday for comments he made showing support for the demonstrations in response to Amini’s death.

He referred to it as “surprising” that France would criticize Iran’s security forces for dealing with “violent individuals and rioters” while threatening to use force against domestic “labour strikes in the oil and gas industry.”

He said, “This is blatant hypocrisy.”

The Islamic Development Coordination Council, one of Iran’s most important revolutionary organizations, has urged people to participate in a counter-demonstration on Saturday after evening prayers to “express their revolutionary anger against sedition and rioters” in response to the call for new protests.

According to a Shargh newspaper reporter, a request was also made this week for “retirees” of the Islamic Revolutionary Guard Corps to congregate on Saturday due to “the present delicate circumstances”.

Mass arrests by the security forces have resulted in the capture of young activists, journalists, students, and even children.

According to Education Minister Yousef Nouri, who was mentioned by Shargh last week, students have been detained inside of classes and sent to “psychological centers.”

From inside the nation, some people have shown sympathy for the demonstrators.

Reformist daily Etemad urged Iran’s top security officer, Ali Shamkhani, to cease making arrests under “pretenses that are sometimes untrue” in an open letter that was printed on its front page on Thursday.

Women wearing black chadors, which cover their bodies and heads, have been invited to the demonstrations that the Iranian government has organized.

An attempt to demonstrate that they had the backing of well-known women fell apart overnight when a photomontage of many people wearing the hijab was removed from a billboard in Tehran within 24 hours of its installation because it included some people who are known to be against the headscarf.