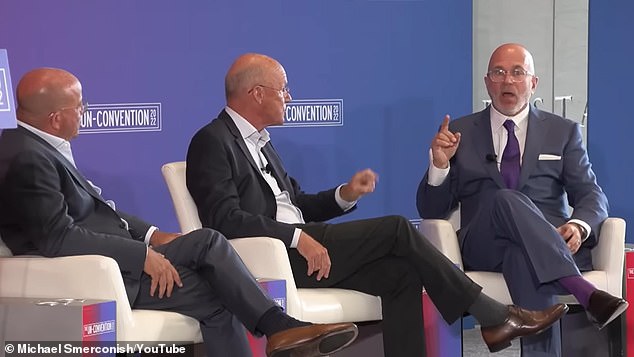 In a discussion on the media, CNN anchor Michael Smerconish attacked former CNN president Jeff Zucker, saying it was “partisan” to not give the story about Hunter Biden’s laptop any airtime.

At the Un-Convention in Philadelphia, former MSNBC president Phil Griffin spoke on the condition of the media alongside Zucker and Smerconish.

“An investigation of political changes to better our electoral institutions and policy proposals to manage a divided country” was how the conference was described.

Smerconish questioned the two ex-bosses about the Hunter Biden incident at one point and inquired as to whether they “regret” the coverage (or lack thereof) of the topic.

Smerconish said, “I believe that the Hunter laptop deserved greater exposure than it got just before the election.”

The network, according to Zucker, “did not know enough about it” but also “did deal with it… to the extent that you would have believed was reasonable.”

He said, “I don’t believe it’s a reasonable critique,” before inquiring as to whether Smerconish had reported the news.

Despite claiming to have “talked about it extensively,” Smerconish acknowledged that Zucker was correct that he had not given the matter much attention.

“I believe that being silent about it makes me seem awful. I ought to have spoken out about the awful situation, he said.

Smerconish said, “I believe that we appeared biased by not giving it some air,” despite not having all the information, to which Zucker answered, “I don’t disagree with that.”

Griffin said that he had never been arrested when he was questioned about the issue. The Justice Department was looking into it, but until he was the son of a candidate, nothing about it had been publicized. Until that occurs, I don’t believe it qualifies as the major plot.

After that, the debate turned to former President Donald Trump, and Smerconish questioned Zucker once again about his coverage.

If Zucker regrets “offering Trump as much oxygen as you gave him in 2016,” Smerconish queried.

I do, of course. I’ve openly acknowledged this,” Zucker retorted.

Republicans have questioned Hunter’s business ties in China and the Ukraine when his father served as Barack Obama’s vice president. These matters are covered in a large number of emails that were discovered on the hard disk of a laptop Hunter allegedly left at a Delaware repair shop.

Chris Licht, Zucker’s replacement after his romance with employee Allison Gollust became public, has made changes to the employees at his old network.

According to reports, Licht wanted to move the network away from opinion and toward more objective reporting.

Prior his resigning on February 2, Zucker had served as president of CNN International since 2013. His annual salary was $6 million.

He acknowledged to staff members that by failing to report a “consensual relationship,” he had broken the company’s Standards of Business Conduct.

Gollust, 49, and Zucker had been coworkers for 20 years. They claim that the epidemic is when their connection became romantic, although according to others, it existed long before COVID.

According to media reports, the relationship between Allison and Zucker’s ex-wife was a ‘open secret’ for more than ten years and that even the doormen at their Manhattan apartment complex attempted to prevent it.

Zucker and Gollust are both ex-spouses. Gollust and her husband, Billy, are believed to have broken up at or around the same time as Zucker and his wife, Caryn, who divorced in 2018.

Before Jeff Gollust sold his condo in 2020 after his divorce from ex-wife Caryn Nathanson, Zucker and Gollust shared a residence in the same Upper East Side apartment building with their separate families.