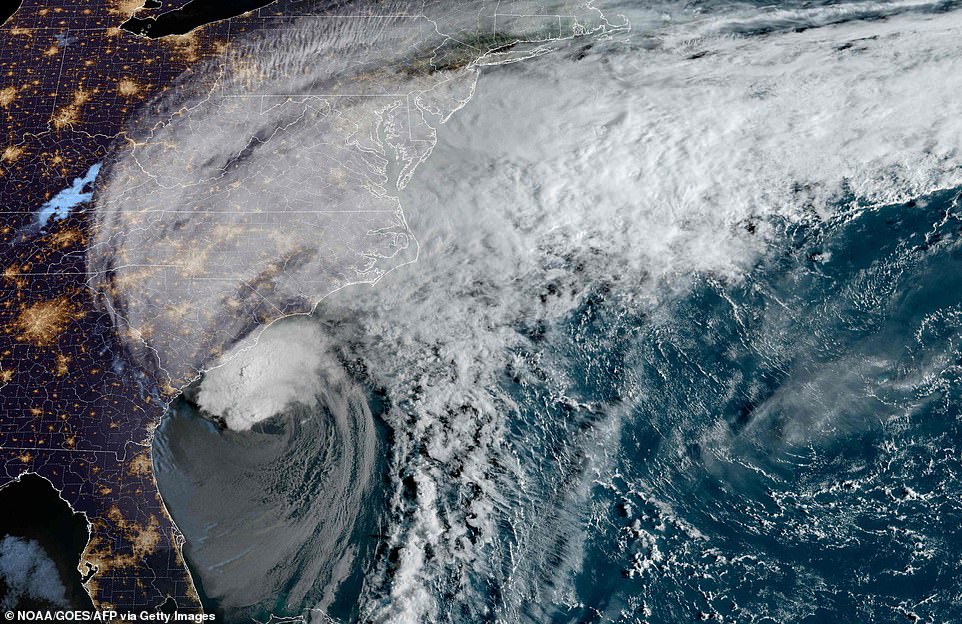 After barreling across Florida and decimating large portions of the state, Hurricane Ian is already battering Charleston with gusts of up to 85 mph as the city prepares for a direct impact and storm waves of up to 7 ft.

As it prepares to batter South Carolina today as well as nearby North Carolina and Georgia, monster storm Ian has regenerated from a tropical storm back into a Category 1 hurricane on Thursday.

Historic Charleston is already being pounded by 85 mph gusts as the hurricane that is projected to cause life-threatening storm surges of up to 7 feet today makes landfall at 2 o’clock in the afternoon.

Since then, Charleston County, which has a population of roughly 413,000, has declared a state of emergency, and authorities have changed how they operate to prepare for the catastrophe or emergency that they warn is “imminent.”

From the Savannah River to Cape Fear, hundreds of miles of coastline are under hurricane warnings, and flooding is predicted in the Carolinas and southwest Virginia.

The entire South Carolina coast, including Hilton Head island, Charleston, and Myrtle Beach, was also under a hurricane warning from the National Hurricane Center.

At least 19 people have perished in Florida, but when damage is evaluated and rescue efforts begin, the death toll is anticipated to rise significantly.

In order to coordinate all disaster relief operations, President Biden has declared a state of emergency in South Carolina and requested federal aid from the Federal Emergency Management Agency.

He said yesterday that the government will pay for all damage in nine Florida counties, with the estimated cost of the damage projected to exceed $260 million.

As Ian makes its way towards Georgia and the Carolinas, the west coast of Florida is also expected to take a beating from the tsunami-like storm surges and up to 8 inches of rain.

Charleston is especially vulnerable; according to a city-commissioned research published in November 2020, 90% of all residential structures are susceptible to flooding from storm surges.

A 4 to 7 ft surge was predicted for Edisto Beach, South Carolina, a tourist area approximately 30 miles south of Charleston.

As 2.7 million people in Florida continue to be without power and Ron DeSantis warned that the whole system would need to be rebuilt, South Carolina is expecting to experience power disruptions.

The scope of the hurricane’s destruction in Florida, where Ian made landfall as one of the most ferocious hurricanes ever to strike the US mainland, became increasingly clear on Thursday.

To rescue hundreds of Floridians stranded inside flooded houses and wrecked structures on Thursday, rescuers navigated boats and waded across riverine streets.

Involving the United States, at least 700 rescues were carried out on Thursday, according to Florida Governor Ron DeSantis. Urban search and rescue squads, the National Guard, and the Coast Guard.

Officials worry that the verified death toll in Florida, which is at at least 17, might increase significantly.

DeSantis described some of the devastation to coastal communities, including Fort Myers Beach, as “indescribable” after seeing the impacted regions on Thursday from the air.

The storm wrecked a historic waterfront pier, cut off the sole road access to a barrier island, flooded residences on both the state’s coastlines, and left 2.6 million homes and businesses in Florida without electricity—nearly a quarter of all utility customers—without power. In the days that followed, around 2.1 million of those clients were still there.

According to a research conducted soon after Hurricane Ian, climate change increased the amount of rain by at least 10%, according to its co-author, climate scientist Michael Wehner of Lawrence Berkeley National Lab.

As the heavy downpours that preceded Ian drain into significant rivers, river flooding in Central Florida may approach historic levels in the coming days, according to the NHC.

Homes in the Fort Myers region were torn from their foundations by the storm and left among the shredded debris.

Businesses close to the shore were entirely demolished and left in a twisted state. Alongside wrecked boats, broken docks drifted at strange angles. On lots where homes formerly stood, fires smoldered.

William Goodison, who had lived in a mobile home park near Fort Myers Beach for 11 years, said in the midst of the devastation, “I don’t see how anybody could have survived in there.” Goodison said that the only reason he survived is because he spent the storm at his son’s home inland.

About 60 houses made up of a park were damaged or destroyed beyond repair by the storm, including Goodison’s single-wide house. Goodison and his son pushed two garbage cans filled with the little items he was able to save—a small air conditioner, some tools, and a baseball bat—across waist-deep water.

Broken trees, boat trailers, and other trash were all along the road leading into Fort Myers. After stalling due to the storm surge flooding their engines, cars were left on the road abandoned.

Thousands of 911 calls in the Fort Myers region were being responded to quickly, according to Lee County Sheriff Carmine Marceno, although many roads and bridges were inaccessible.

To reach trapped persons, rescue workers cut through fallen trees. Due to electricity and cellphone failures, many people in the most severely affected regions were unable to contact for assistance.

Sanibel Causeway was partially destroyed as it slid into the water, blocking access to the barrier island’s 6,300 residents.

While traversing the Florida peninsula, Ian lost hurricane intensity for many hours before regaining it Thursday night over the Atlantic. On Friday, a Category 1 hurricane was expected to make landfall in South Carolina, according to the National Hurricane Center.

In South Carolina, National Guard personnel were being prepared to assist with the aftermath, including any water rescues. As a necessary move to expedite government assistance for the state’s recovery once Ian passes, President Joe Biden issued an emergency declaration for the state of Washington.

Cooper, who was at the state’s emergency operations center on Thursday, warned that up to 7 inches of rain might fall in certain places, and that there is a chance of tornadoes and mountain landslides over the whole state.

The sole bridge connecting Sanibel Island, a well-liked vacation spot on the Gulf Coast, to the mainland was destroyed, requiring rescue workers to utilize boats and helicopters to get to the island’s population.

Roadways in Punta Gorda, which was directly in the path of the hurricane, were littered with branches, debris, and power lines, but a lot more structures fared better than anticipated.

When Hurricane Charley devastated most of the city in 2004, Brenda Siettas, a 62-year-old paraprofessional who works with kids, was there. Since then, stronger materials have been used to build buildings, she said.

Since Charley, they have clearly rebuilt much better, she remarked. “Back then, I remained here for two weeks without electricity, running water, or sewage.”

When speaking with DeSantis on Thursday, Biden promised to visit Florida when the weather permits. Deanne Criswell, director of the Federal Emergency Management Agency, will visit Florida on Friday.

A disaster designation was also authorized by the president, opening up government assistance to the storm-affected communities.