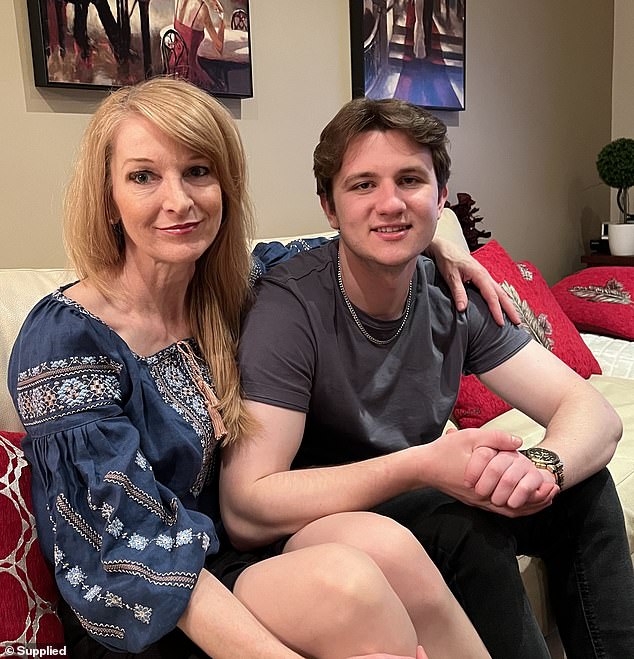 A TikTok celebrity who caused a stir by posting a video of himself handing a woman flowers at a mall has spoken out about his struggles with his own problems.

Harrison Pawluk caused controversy earlier this year when the subject of the video, which has received 70.8 million views, said that his “clickbait” gesture made her feel dehumanized.

The 22-year-old Melbourne social media celebrity, better known online as lifeofharrison, has been coping with the tragedy of Russia’s conflict with Ukraine behind the random acts of kindness and free hugs on camera.

Pawluk’s cousin was caught in her Kyiv flat when Russian bombs began dropping there in late February, and when she momentarily exited her bunker to obtain water and clean clothing, the sky began “raining missiles.”

His mother Diana Pawluk’s first cousin was hiding out in a bunker under her apartment when the invasion started.

In light of the fact that great, great uncles on his mother’s side had vanished and may have been murdered in the 1930s, when Soviet communist dictator Joseph Stalin sent Ukrainians to gulags, or forced labor camps, as part of an enforced famine, Harrison said the situation was especially harrowing for his family.

He told Daily Mail Australia, “Mum’s great uncles who resided in Ukraine during the Stalin period were shipped off to Siberia never to be seen or heard from again.”

University student Harrison is speaking out against the horrors committed by Russia in both the past and the present after President Vladimir Putin said this month that he would send 300,000 military reservists to help the Ukrainians retake lost land.

The fact that an independent country was attacked without any justification at all, he remarked, “I find that profoundly troubling.”

“So many innocent people have been tortured and slain, and those who were lucky enough to escape have been left with nothing but rubble or have been forced to leave to other nations.”

“I’m very proud of the Ukrainian people for their tenacity, steadfastness, and fortitude in the face of opposition to reclaim what is rightly theirs.

When the time comes, “I wish to travel and aid in reconstruction.”

Diana said that her cousin, who asks to remain unnamed for security reasons, had endured eight years of Russian attempts to undermine Ukraine before being caught off guard by the invasion seven months ago.

‘Even though my relatives in Ukraine were directly impacted by a significant cyber-attack at the time and were aware of some destabilization in the nation, the general view among them and their friends was that a full-scale assault would not eventuate,’ she added.

“They had made some contingency preparations in terms of where to temporarily take asylum,” writes the author, “having lived in the nation with a continuous conflict in the east for the prior eight years, but nothing had genuinely prepared them for what had transpired.

When Russian forces began to amass near the Ukrainian border in February, Diana was in communication with her family and they said that she had pushed them to leave the country.

They hid in a bunker under their flat on February 24 when the Russians struck.

On the second day of the invasion, they went back to their flat, which was above, to pack some fresh clothing and water to bring back to the bunker.

They believed it was okay to do so, Diana said.

After entering the flat, they were immediately caught up in the assault as missiles started to fall.

They messaged me because they were terrified and helpless since they were trapped and unable to escape.

“I was driving in Melbourne at the time, and I could hear my phone pinging frantically. I felt worried, so I pulled over, only to discover the seriousness of the position they were in.

“The message asked whether I was aware of the bombing situation in Kyiv since they were afraid and trapped and missiles were falling near their apartment building, and it was hard for them to tell the truth from fiction based on what they had read.

“The most terrifying” question was “were they going to die?”

Diana’s relative managed to escape the blast and go to Poland.

A few days later, Diana said, “they re-established communication to let me know were attempting to make it over to the Polish border with some help from the military and a group of other Ukrainians they had come to know.”

They were only travelling at night and in between explosions between bunkers, a network of tunnels, and metros.

Diana’s cousin was able to send her a postcard in English since Ukraine’s postal services are still able to transport letters despite the conflict.

“Diana, once again, I appreciate your help. Right now, it’s crucial for our nation,’ it said.

God be with you, my friend.

Diana, however, said that her relative had seen Russian war crimes as they fled from Ukraine.

A week or so later, she heard that they had left Ukraine safely, but it had cost them something.

They suffered greatly from the mental health effects of seeing the many atrocities carried out by Russian forces along the journey.

Diana’s cousin has now relocated from Poland to a neighboring nation, although she eventually wants to go back to Ukraine.

Until it is safe to return to Ukraine, she added, they are attempting to maintain a feeling of normalcy.

“Ukrainians are generally pretty robust people, and they will always want democracy.”

“All they want is a free, independent, and modern Ukraine, free of Russian influence, and we won’t stop until we have it,” we will say.

Ukrainian Guardian Angels, Caritas, and the Australian Federation of Ukrainian Organization are all good places to donate to Ukrainians caught up in the fighting.