Skip to content
Go Home «» News «» World News «» Giorgia Meloni’s party is the country’s biggest, making her the leader of a right-wing coalition 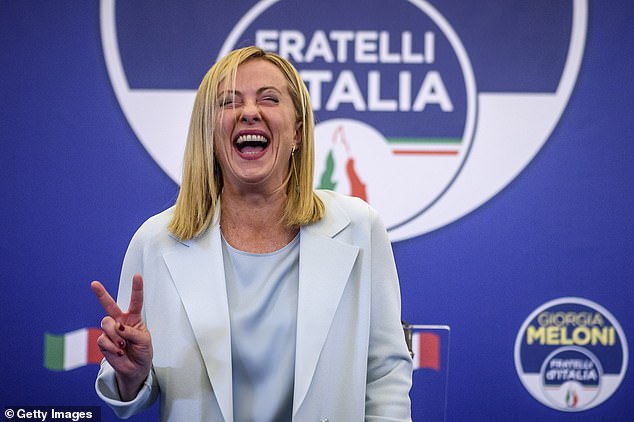 With her tenacious campaign centered on “God, nation, and family,” she has gained the support of the Italian people.

And now that Giorgia Meloni’s party has overtaken it as the biggest in the nation, making her the presumed leader of a right-wing coalition, she has the ability to reshape the nation in her own image.

The single mother of one has endured criticism for being a neo-fascist and “heir to Mussolini,” but the firebrand has made an effort to ignore the criticism and win over all Italians.

She has attacked the EU and “woke ideology” throughout the race while emphasizing the value of religion and the family.

For criticizing the “LGBT lobby,” implying she is against abortions, and recommending a blockade of Libya to halt refugees from crossing the Mediterranean, she has courted controversy.

MailOnline examines what the new leader has promised to do for Italy in this article.

While Matteo Salvini and Silvio Berlusconi, Meloni’s coalition partners, have in the past questioned the use of sanctions against Moscow and shown respect for Vladimir Putin, Meloni has supported Western approaches on Ukraine.

Meloni herself applauded Putin for winning the 2018 election, but she now takes a more antagonistic position toward the despot who has shocked Europe with his brutal invasion of Ukraine.

The coalition program has pledged to uphold NATO commitments and supports all efforts to end the conflict.

Meloni is also in favor of giving Ukraine weapons for self-defense.

The legislator had previously supported abandoning the euro, but she has now changed her mind.

While pledging “complete devotion to the European integration process,” she wants an union that is “more political and less bureaucratic.”

She also wants to promote Judeo-Christian values throughout the union and has called for a reassessment of EU regulations on public expenditure.

Since Meloni’s technocratic predecessor Mario Draghi was a significant Eurocentric figure, her success might shock the EU at a time when the organization is already vulnerable due to Brexit and Angela Merkel’s resignation.

During his 18-month tenure in office, Draghi, the former president of the European Central Bank, established solid connections with Berlin and Paris and pushed Rome to the forefront of EU policymaking.

Hard-right opposition parties in Spain and France, as well as the national conservative governments of Poland and Hungary, all of which have tense relations with Brussels, were among the first in Europe to applaud Meloni’s triumph.

Meloni has supported Viktor Orban, the prime minister of Hungary, in his conflicts with Brussels and believes Rome ought to speak out more for its national interests.

After tens of thousands of migrants were rescued in the Mediterranean Sea or transported there by smugglers’ boats, the right wing has been fighting unchecked immigration for years.

Both Meloni and Salvini have railed against what they see as a foreign invasion that does not share what they refer to as the “Christian” spirit of Italy.

In an effort to incite anti-immigrant frenzy, Meloni shared a video last month showing a Ukrainian lady being sexually assaulted by an asylum seeker in an Italian city.

An asylum seeker from Guinea attacked a 55-year-old lady on a city sidewalk early on Sunday, according to local authorities.

“A hug to this lady,” tweeted Meloni in response to the video. I’ll do every effort to make our cities more secure.

She and Salvini, who is presently on trial for obstructing charity rescue ships in 2019 when he was interior minister, both pledged to stop the tide of migrants.

Her main targets are the boats carrying human traffickers from Libya to Italy and the automatic citizenship granted to children born to foreign parents.

She wants the Italian navy to blockade the coast of North Africa so that all migrants may be examined to see whether they are indeed refugees before departing.

Speaking on a TV station run by the Berlusconi family, she declared: “A “naval blockade” is the only effective way to address the issue of migrant landings on our coasts.”

She said, “[This] is no different from a European mission to negotiate with Libya, the prospect of blocking the inflatable boats after their departure,” likening the suggestion to EU measures to tighten border security.

Politicians opposed to Meloni, however, said that any move to blockade the coastlines of another country would effectively constitute a declaration of war.

Laura Boldrini, a former house speaker, tweeted, “Meloni, do you realize that under international law it is considered an act of war.”

“Uncontrolled immigration is what regular people worry about,” Meloni remarked. People in the lowest echelons of society are affected.

“Those who support free borders live on a higher plane.” A nation must have the authority to control immigration.

She doesn’t care if the Left-wing media in Italy denigrates her for her opinions, as shown by a speech she gave to the Right-wing Vox party in Spain a few weeks ago.

She reportedly proclaimed to the crowd at the rally: “Yes to natural families, no to the LGBT lobby, yes to sexual identity, and no to gender ideology,” before adding, with a crescendo in her voice, “No to the violence of Islam, yes to safer borders, no to mass immigration, and yes to working for our people.”

Meloni has also promised to set up EU-run facilities outside the Union to handle claims for refuge on the Continent.

She also favors more harmonious social programs and more integrated immigration for those who do enter Italy legitimately.

Her main initiatives include significant reductions in company taxes, VAT, and income taxes.

Italy is experiencing extreme inflation, much like the rest of Europe, and this winter’s energy crisis related to the situation in Ukraine is looming.

The third-largest economy in the eurozone, Italy, is likewise burdened with debt that amounts to 150 percent of its GDP.

Despite her coalition’s calls for tax cuts and more social expenditure, she has emphasized economic restraint.

She intends to lower the tax burden for households, companies, and the self-employed who will pay a flat tax by fully using the £195 billion allocated under the EU’s Covid recovery plan.

She wants to renegotiate the grant at the same time, requesting additional money from the bloc since the Russia-Ukraine conflict and the energy crisis have made the prior economic problems worse.

Italy buys 40% of its gas from Russia, thus she wants to boost renewable energy output and take nuclear power facilities into consideration.

Her outspoken opinions on abortion and the LGBT community have been one of Meloni’s toughest challenges as she works to rebuild the family.

Meloni has vehemently criticized “the LGBT lobby” and “gender ideology” during campaign rallies.

Her cultural spokeswoman Federico Mollicone claimed last week that same-sex parenting was not typical, which infuriated many.

In an interview with San Marino’s Rtv that aired late on Thursday, Mollicone reiterated his earlier condemnation of a Peppa Pig episode that portrayed a polar bear with two mommies.

It is a really significant problem, according to Mollicone. Presenting these couples as something entirely normal is incorrect since it is not, as long as the Italian state does not enact legislation regarding them.

Despite the fact that the nation legalized same-sex civil unions in 2016 as a result of a legislation that FdI opposed in parliament, he continued by saying that “gay relationships are not legal, are not permitted” in Italy.

Mollicone explained on Friday that he was only talking to homosexual couples who adopt in response to criticism of his remarks. His party, he emphasized, now supports civil partnerships and “is against any discrimination.”

He made headlines two weeks ago when he suggested that the “Peppa Pig” episode featuring the homosexual polar bears, which debuted in Britain, not be shown in Italy in order to prevent “gender indoctrination.”

While reiterating her opposition to adoptions and surrogacy for LGBT couples, Meloni has consistently dismissed accusations that she may roll back laws on abortion or gay rights during the campaign.

Women who are undecided whether to end pregnancies should have an option, according to Meloni.

We’re not going to change the abortion legislation. She said, “We simply want (women) to know there are alternative possibilities.

According to Bonino, who served time in prison for her efforts to legalize abortion in the 1970s, Meloni is likely to follow her word about not doing so.

She worries that Meloni may, instead, “advocate for the legislation to be disregarded,” which will exacerbate a current issue—the difficulty in obtaining abortion pills or locating gynecologists who will conduct terminations.

Elizabeth Borne, the next French prime minister, promised to pay “attentive” attention to Italy’s observance of the right to an abortion and other human rights after her victory today.

Borne said on BFM television, “Obviously we will be vigilant, with the head of the European Commission, that these principles of human rights, the respect of one another, in particular the respect for abortion rights, are respected by everybody.”

Limiting abortion would aid in reversing Italy’s population decline, which Meloni has publicly said she intends to do.

In addition, she intends to provide incentives for having kids, such as free daycare, job protection for new moms, and increased welfare benefits.

»Giorgia Meloni’s party is the country’s biggest, making her the leader of a right-wing coalition«