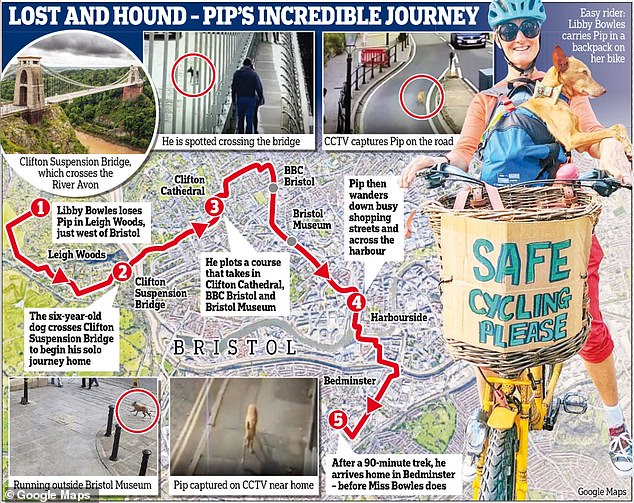 The incredible journey of a missing dog named Pip the “miracle puppy,” who trotted five miles across a crowded city to return home, can be revealed today.

On September 18, Pip the Podenco wandered off while chasing squirrels on a stroll with owner Libby Bowles, age 47.

While Ms. Bowles spent 90 minutes searching for him in Leigh Woods, the courageous dog took to the streets and walked all the way home, arriving 20 minutes before she did.

Now, footage of the dog’s 4.8-mile excursion around Bristol has surfaced, showing him stopping traffic as he cheerfully trots along roads and over a bridge.

After becoming lost while chasing squirrels, Pip the pedenco went on a 4.8-mile journey throughout Bristol. Here, he is depicted attracting attention as he walks down a path.

The courageous dog was captured on camera crossing the Clifton Suspension Bridge while cars trailed slowly behind him.

This ice cream truck captured Pip’s attention on his excursion before he continued on and crossed the street.

At times, he appeared disoriented, zigzagging across roadways to find his way home.

In the footage, Pip can be seen merrily strolling across the Clifton Suspension Bridge, unaware of the line of automobiles following him patiently.

As he continued through the city, astonished pedestrians stopped to watch the intrepid dog make his way down the road.

Earlier, PIP was observed gazing longingly at an ice cream truck before crossing the street.

At times, the dog appeared to lose his bearings, as CCTV footage captured him zigzagging across highways during a citywide search for him.

Ms. Bowles contacted local lost and found groups in an effort to locate him. Locals tweeted updates and CCTV images as he was sighted throughout the city, including in front of his former residence, in a park, and in front of a museum.

Pip is a Spanish rabbit-hunting hound that was rescued. Now a therapy dog, he is well-known in Bristol due to the fact that he rides in Ms. Bowles’ backpack while she cycles throughout the city.

On September 18, Pip wandered off while chasing squirrels on a stroll in Bristol with owner Libby Bowles (left).

Pip, nicknamed “wonder dog,” walked himself home while his owner, Ms. Bowles, looked for him.

Ms. Bowles stated, “The thing is, he’s extremely calm and quiet unless there’s something furry to chase.”

‘He’s ran away before, but he’s always returned, so I was concerned when he didn’t return this time.

“I spent an hour traveling up and down our walking path looking for him, and luckily came across some friends who walked to the opposite side of the woods to look for him.” They actually did notice him, but he escaped at the last second by ducking under a fence.

Pip’s escape prompted a citywide manhunt. CCTV cameras filmed him at multiple locations throughout the city, galloping along the sidewalk oblivious to the search group.

Ms. Bowles remarked, “Initially, I wondered, “How on earth is he going to cross Bristol by himself?” Fortunately, Pip has a wonderful sense of smell; he frequently leads me to the homes of his canine companions on our walks.

“The dog community in Bristol is phenomenal, so I placed him in one of the groups and received regular information on where he was spotted.” He returned to our old apartment, passing the Bristol Museum and across the all of Bristol.

‘Eventually, he was spotted at the park close to our home, and I exhaled a sigh of relief because I knew he would be able to get home from there.

I contacted our neighbors, and they were eagerly awaiting his return. He reportedly rounded the corner with seeming indifference. His canine companions and a plenty of food were waiting for him.’

During his 4.6-mile trek home, which included a stroll across Clifton Suspension Bridge, Pip was seen on CCTV (pictured in the background)

Pip originally belonged to a Spanish hunter. He was saved and adopted by Ms. Bowles, who works in sustainability education, after being discovered on the street.

Pip is currently a therapy dog and a participant in the Read2Dogs initiative, in which youngsters rather than adults can read to him to improve their literacy skills.

Ms. Bowles stated, “As a former elementary school teacher, I find this activity to be really beneficial; it has a significant impact on classroom confidence.”

I’m writing books about Pip and his escapades so that children can read to him about all of his wonderful exploits.