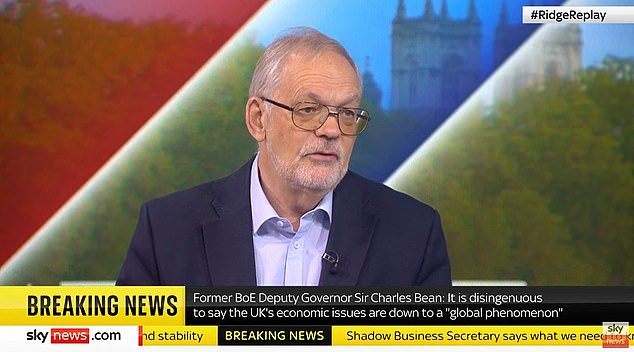 A former Bank of England governor today cautioned that politicians are not being truthful about the issues confronting the country and that the UK economy is now on par with Italy and Greece in terms of hazardous bets for lenders.

Sir Charles Bean, a former deputy governor of the central bank, criticized the Government for making the claim that the market upheaval is “all a global event.”

He reacted angrily today when Kwasi Kwarteng was removed as chancellor by Jeremy Hunt in an effort to calm the markets.

Waves of turbulence have been seen over the last three weeks since the mini-Budget, first in the pound market and most recently in gilts, or government bonds.

Ministers have been eager to pin the problems on the conflict in Ukraine as well as the broader cost of living crises and interest rate increases that impact mortgages.

Sir Charles, however, said to Sky’s Sophy Ridge on Sunday that it was untrue to imply that it was all a worldwide issue.

There is a worldwide component, and the average interest rate has increased by nearly three percentage points since the year’s commencement.

The world and what’s happening in the Ukraine account for about two-thirds of that, but the remaining three-quarters are a UK-specific phenomenon that has clearly been fueled by the mini-budget, in my opinion.

Basically, we’ve gone from looking somewhat similar to the US or Germany as a proposition to lend to looking more like Italy and Greece.

With Athens experiencing its own financial crisis in 2007–2008, which caused the deepest recession in the history of any modern country, the Mediterranean nations have long been seen as among the least stable in the EU.

It happened at the same time as Mr. Hunt spent the weekend assuring the markets that the UK was in good economic standing.

He attempted to reassure families that the austerity years would not return while forewarning of impending significant reductions in public expenditure.

Mr. Hunt is anticipated to undo the mini-proposal Budget’s to raise the basic rate of income tax by one penny to 19 pence, after the Conservative Party’s Friday retreat on the issue amid allegations that they are still working on replacing the Prime Minister.

None of the three major components of the “Trussonomics” package from only three weeks ago remain as a result of the new chancellor’s actions one day after receiving the keys to No. 11. Along with the shamefully overturned decision to eliminate the 45p income tax rate for the wealthiest incomes at the Conservative Party Conference, corporation tax was also reversed on Friday, rising from 19% to 25%.

Mr. Hunt said he wants to maintain as much of Liz Truss’s tax cuts as he can but that all options are still open when appearing on BBC One’s Sunday with Laura Kuenssberg.

The Prime Minister is in control, he said on Sunday alongside Luara Kuenssberg, adding, “We’re going to have to make some very painful choices both on expenditure and on tax.” According to him, spending will not rise as much as anticipated, taxes will not decrease as swiftly as anticipated, and certain taxes will even rise.

He also hinted at impending expenditure cutbacks by saying that no government agency will be exempt from “efficiency savings”.

When asked whether the 2010 coalition’s austerity policies will be reinstated, he said, “I don’t believe we are going to have anything like that this time.”

The Chancellor had previously asserted that he and the Prime Minister were a “team,” but claimed that she and ousted former Chancellor Kwasi Kwarteng went “too far, too quickly” with their mini-Budget. The Chancellor also spent Saturday meeting with Treasury staff.

Some MPs supported the PM’s decision to continue today, arguing that policy changes were more important than a new leader. However, others have said that Hunt’s selection and actions might spell the end for Ms. Truss’s brief reign of power.

Robert Halfon, a Conservative MP, did not demand Liz Truss resign as prime minister but instead unleashed an astonishing assault on her administration while urging for a “dramatic reset” in the coming days.

Mr. Halfon said: “I fear that over the last few weeks, the Government has looked like libertarian jihadists and treated the whole nation as sort of laboratory mice on which to carry out ultra, ultra free market experiments.” Mr. Halfon was speaking on Sky News’ Sophy Ridge on Sunday.

And this is not the location of the nation. One terrifying tale followed another.