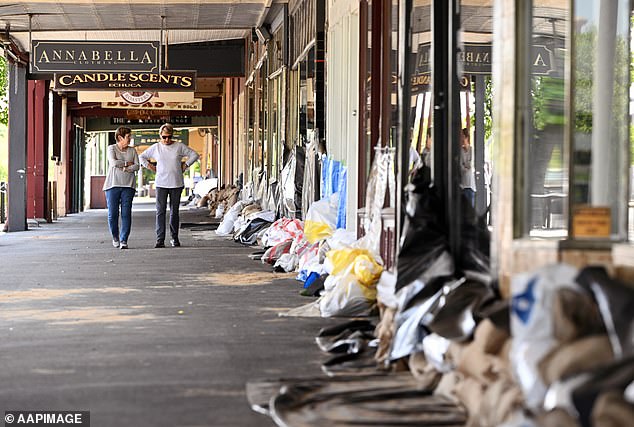 In heartbreaking photographs, scores of rural Victorians can be seen attempting to construct sandbag barriers to save their communities from disastrous floods.

As further financial aid is provided to towns affected by the harsh weather, the latest flood catastrophe in the state has resulted in two more fatalities.

On Wednesday afternoon, Kerang, a town in northern Victoria, issued an evacuation order because the community was anticipated to be cut off after the Patchell Bridge on the Murray Valley Highway closed at 7 p.m.

There are now four active evacuation orders for municipalities in the state’s north.

There are worries that by Friday, river levels in Echuca in northern Victoria might be 95 meters higher than they were in the 1993 floods.

Thousands of people have spent the last several days constructing a temporary 2.5-kilometer flood wall of sandbags in the town despite the evacuation orders in order to safeguard thousands of houses and businesses.

Photos show villagers battling to stack the hefty sandbags as others use construction equipment to make earthen barriers.

Residents were spotted building the mounds with the aid of fire personnel while defending the neighborhood McDonald’s, bars, shops, and residences.

The wall, however, has split the town in two, making the homes and residents on the incorrect side vulnerable to flooding.

One local told AAP that although she was happy that the levee had been constructed, she was quite worried that if the floods rose beyond the earthen wall, they would send privately owned houseboats moored along the Murray onto her land.

Tim Wiebusch, chief operational officer of the State Emergency Service, defended the wall but acknowledged there were certain hazards.

Yes, he added, “there will be a tiny number of homes outside of that levee that might also be damaged.”

The corpse of a 65-year-old man was discovered in floods on Paynes Road in Nathalia, close to Shepparton, on Wednesday morning.

Tuesday night about 10 p.m., he failed to come home, and his abandoned tractor was discovered in floods.

Following his passing on Saturday was a 71-year-old Rochester man.

The Australian and Victorian governments announced a jointly financed assistance plan as cities along the overflowing Murray River system braced for thunderstorms.

It means Emergency Recovery Victoria will oversee the initial step of clearing the first wave of risks from homes and businesses that have been damaged or destroyed.

According to Prime Minister Anthony Albanese, “the first stage in rebuilding is making sure houses are secure and dangerous debris isn’t putting families at risk. It’s a tremendous task, but we’ll be there with Victorians every step of the way.”

The state government has unveiled a $73.5 million assistance package to aid farmers and business owners in cleaning up after the floods that have struck important agricultural regions, including $10,000 awards for primary producers.

When you consider what is happening and has happened in some of these communities, it may be rather daunting. Therefore, whatever help we provide is crucial,’ Premier Daniel Andrews told the media.

The possibility of significant rainfall during anticipated thunderstorms in the next several days has diminished marginally as waters continue to retreat in areas of the state including Shepparton and Rochester.

On Thursday, isolated showers and thunderstorms are anticipated in the northern regions.

Widespread showers on Friday and Saturday will typically produce totals of two millimeters to ten millimeters, although heavier amounts of thirty millimeters may occur in Victoria’s north-central and north-eastern regions.

According to Bureau of Meteorology senior meteorologist Kevin Parkin, “We’ll be following that thunderstorm activity very carefully and issuing warnings for more of a flash flood danger rather than significant rainfall across a larger region.”

Echuca as well as the neighboring communities of Barmah and Lower Moira are under evacuation orders.

Additionally, municipalities along the Loddon, Campaspe, and Goulburn rivers have flood warnings in effect.

There were no reports of any damage from the 3.4 magnitude earthquake that occurred on Wednesday in Mansfield.