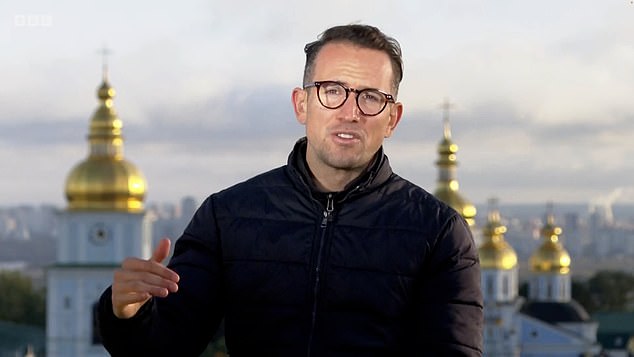 During a live broadcast this morning, a BBC correspondent was forced to seek cover when Russian missiles struck Kiev behind him.

As Russian president Vladimir Putin’s retaliation for an explosion that disabled the Crimea Bridge got begun, Kiev was struck by numerous explosions today, with rumors of explosions in at least two additional locations.

Hugo Bachega, the BBC’s correspondent in Kiev, was delivering a news report from a rooftop in front of the city’s renowned golden-domed St. Michael’s Monastery at 8:18 a.m. local time when the roar of an engine could be heard overhead.

Hugo Bachega (pictured) was delivering a news report from a roof in front of the city’s famed golden-domed St. Michael’s Monastery at 8:18 a.m. local time when the sound of an engine could be heard screaming overhead.

He paused in the middle of his report to check behind him before an explosion could be heard in the distance, prompting him to drop down out of view of the camera overlooking the city.

Back in the studio, a concerned-looking news anchor informed viewers that Bachega had taken cover for “evident reasons” at that time.

It was unclear whether the engine noise was from a missile or a warplane. According to the BBC, the correspondent was reporting when “several” explosions shook the city center of Kiev.

Bachega and his team later confirmed their safety to the BBC, the network claimed. It was said that he and his crew fled to a bunker and contacted the BBC around an hour after the occurrence.

According to officials, a number of persons were killed and injured in the attacks in Kiev, although the exact number is presently unknown.

One missile struck near a monument to the Ukrainian statesman Mykhailo Hrushevskyi, while another impacted the Shevchenkivskyy area in the heart of the city. Videos depicted automobiles on fire in the streets.

There were indications of additional attacks on the Ukrainian cities of Zaporizhzhia and Dnipro, where more than 40 people have been killed by shelling in recent days.

At least two explosions have been reported in at least two more towns, as Russian president Vladimir Putin’s retaliation for an explosion that disabled the Crimea Bridge began today. Hugo Bachega, journalist for the BBC, is shown reporting from Kiev.

Bachega (pictured) paused his report mid-sentence to look behind him before he heard an explosion in the distance, compelling him to crouch down.

Back in the studio, a concerned-looking TV anchor (above) informed viewers that Bachega was taking cover for “obvious reasons” at that time.

It is the first time in months that Kyiv has been directly attacked, and it comes as Vladimir Putin meets with his security council today to plot his retaliation for the weekend bombing of the Kerch Bridge, which connects Russia and Crimea.

Putin attributes the explosion to Ukraine and labels it a terrorist act.

Ahead of his Security Council meeting, supporters of the Russian president urged the dictator to’stop talking’ and ‘painfully punish’ the Kyiv regime, despite the Kremlin playing down fears of a nuclear reaction

In a threatening video sent on Twitter, he demanded, “Ukrainians, leave your cities, particularly the larger ones. Because a large surprise awaits you. The Sarmat missiles are ready for launch.

Multiple people have been killed and injured in attacks on the Ukrainian capital of Kiev this morning, amid reports of explosions across the country. Pictured: On Monday, cars are seen ablaze following Russian missile strikes, as Russia’s bombardment continues in Kiev.

Monday, rescue personnel inspect the scene of a Russian assault on Kiev, Ukraine.

The Telegraph says that Putin’s former adviser Sergei Markov asked his former boss to ‘punish’ Ukraine and its allies following the demolition of the Kerch bridge in Crimea.

“It’s time for Russia to stop talking and begin silently and severely beating them,” he stated, causing concern about Putin’s response.

President Volodymyr Zelensky responded to his counterpart’s charges of terrorism by noting that Russian missile strikes on Zaporizhzhia have killed at least 43 people this week alone.

In a video message to the world, the leader of Ukraine stated, “The constant terror against the civilian population is a clear indication that Russia refuses to participate in genuine dialogue.”

»During a live broadcast, a BBC correspondent ducks as Russian rockets attack Kyiv«