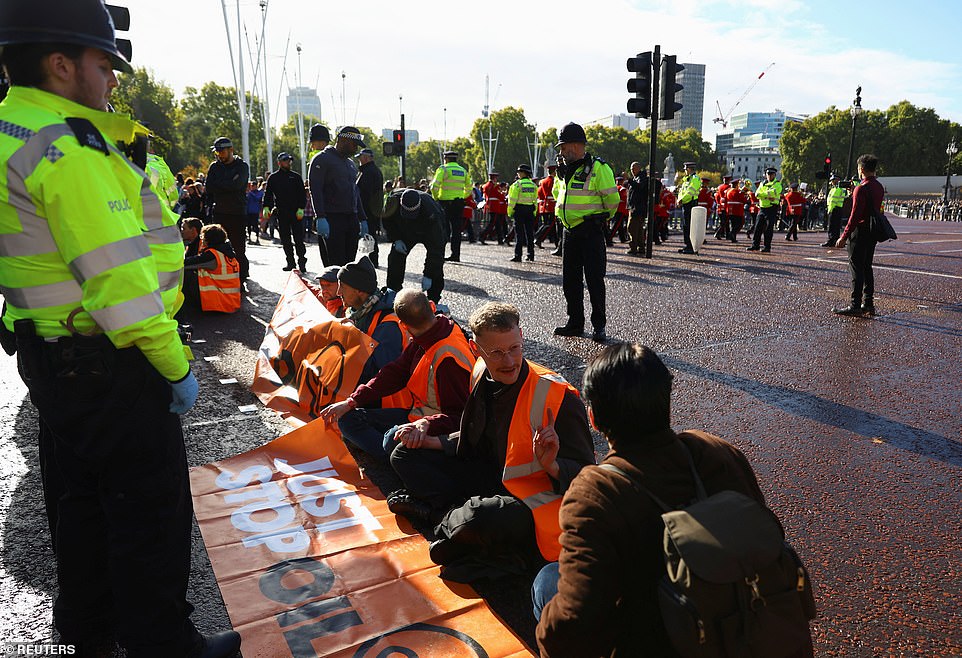 Police liaison officers have provided assistance to eco-fanatics who blocked up roads near Buckingham Palace this morning, angering drivers who yelled at them to “find a job.”

As the mob glued itself to The Mall outside Buckingham Palace today to hold a sit-down protest, one cop was seen on camera urging the crowd, “Let me know if I can do anything for you.”

Angry vehicles yelled at the Just Stop Oil climate protestors outside Buckingham Palace today as they were forced to weave their way past them.

On the ninth day of protests, demonstrators tried to block The Mall, with one van driver honking his horn and yelling, “Get a job!”

Around 8.45 am, protesters opposing the government’s fossil fuels policies set up a barrier across the street while wearing high-visibility vests with the Just Stop Oil insignia.

Students from Erskine, Renfrewshire’s Park Mains High School were there to observe the demonstrators. Let’s take a picture with the protestors, said one of the teachers.

A student who filmed a protester in the face was reprimanded by another instructor. But they’re protestors, and they want the limelight, the student remarked. Don’t repeat it, the instructor said. Wrap your neck around.”

The group was addressed by a police liaison officer who was present at the site today: “Let me know if I can do anything for you.” Not until you have a letter from Liz Truss, the protester retorted.

I don’t want you to damage yourself, sir, another officer remarked. I’d hate for you to suffer any injuries whatsoever if you tape yourself to the pavement.

Another liaison officer was seen asking group members sitting in the rain this morning if they had “any issues or questions.”

30 activists from Just Stop Oil reportedly set up a blockage on The Mall at 8:45 a.m. today, blocking traffic in both ways as they sat down holding banners for the organization.

‘At 8.45 this morning, 30 Just Stop Oil supporters set up a barricade on the Mall, preventing traffic in both directions,’ a representative for the group stated. Some of them have plastered themselves to the Tarmac while others are sitting on the road.

And a Metropolitan Police spokeswoman tweeted: “Officers are on site and are trying to remove the demonstrators. We are aware of a continuing demonstration taking place in The Mall, W1.” The road is still partially blocked. We will provide updates with further information.

Just 11 activists, some of whom were stuck together or to the road, were left after police had removed more than half of the Just Stop Oil demonstrators off The Mall by 10.30am.

One of the Glasgow-based Just Stop Oil protesters who was obstructing The Mall, Emma Brown, 31, stated the activists “would walk 500 miles” to “just stop oil.”

Ms. Brown said that this was her first protest and that the demonstrators had traveled from Scotland.

We have decreased since the government is moving forward with more than 100 additional fossil fuel licenses, she added. And it is essentially a death sentence for everyone present, including you.

We must prevent this from happening again. There must be a cutoff point somewhere. On our doorstep, we’ve already seen the consequences. The results are being felt all around the world. And the insanity needs to end.

At The Mall, a number of police officers and police liaison officers were speaking with the demonstrators. At the site, eight police cars were there.

How long will you be here, a police officer inquired? As a response, a demonstrator said, “Until we have a new government.”

The demonstrators were then searched by police before they started removing them off The Mall. Some of the campaigners had applied adhesive on their hands.

Police began making arrests of the demonstrators on The Mall after claiming they needed to clear the way for the Changing of the Guard.

The first two voluntarily crossed the street and were transported to a police vehicle, while the others had to be hoisted by cops into several vans.

Around 10am, several protestors departed on their own own and were brought to a police vehicle, while other protesters had to be forcefully moved by cops to other vans.

Some had been arrested, according to a police officer on the site.

The protestors, who came from Scotland, said they were compelled to take action after the UK Government supported the development of oil and gas activities in the North Sea in September.

This month, a fresh wave of oil and gas licensing is anticipated from the North Sea Transition Authority (NSTA).

Alister Jack, the Scottish Secretary, said that this might result in the granting of more than 100 additional licenses, “safeguarding” the UK’s energy supply and supporting more than 70,000 employment in Scotland.

“Their choices don’t serve the interests of the people the most.” There is a lot that can be done to help the climate issue, but this administration appears determined to ignore it all and put the needs of the common person ahead of business interests.

“I want to use whatever opportunity we have to demonstrate to them that the public won’t stand for it.” We are their source of power because there are more of us than there are of them.

I’m taking action to protect my future, the futures of the people I care about, any children I may have in the future, and everyone else who is now suffering the effects of the climate catastrophe without having had a say in any of the decisions that led to it.

The Lorax is my children’s favorite book, and they already comprehend what the Eton-educated government completely fails to understand: that oil extraction at any costs will destroy our only home, Kevin Wing, a 47-year-old father of two from Glasgow, said.

“I’m taking action for the future of my children’s generation and for all the families in the developing world presently suffering from the consequences of climate change.”

The UK government is giving billions of pounds in tax subsidies to the dying fossil fuel sector, refusing to choose to assist struggling households amid this energy crisis.

‘This is enriching a wealthy elite at the expense of the poor who must choose between heating their homes and eating.

In order to combat this horrifying inequality and the UK government’s war on the poor, I am engaging in nonviolent direct action.

It comes after the Just Stop Oil group tried to block areas of Westminster with another sit-down demonstration yesterday, during which the Metropolitan Police made at least 45 arrests.

24 persons were detained on Saturday for deliberate highway obstruction.

In order to “occupy Westminster,” the organization has also said that it would gather everyday in October at 11 a.m. outside Downing Street.

Over the weekend, there were more chaotic scenes when vegans joined environmental demonstrators by painting storefronts and dumping milk on the streets.

‘Our supporters will be back today, tomorrow, the next day, the day after that, and every day until our demand is met: no new oil and gas in the UK,’ a spokeswoman for Just Stop Oil said today.

“We won’t be deterred by legal reforms, and we won’t be prevented by private injunctions that aim to quiet peaceful protesters.

“Our supporters know that they are meaningless when weighed against the loss of our rights, freedoms, and communities,” they say.