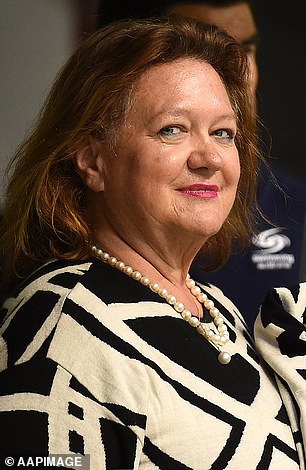 The Indigenous athlete at the crux of the Netball Australia issue has been left ‘devastated’ after mining magnate Gina Rinehart withdrew her mining company’s $15million sponsorship arrangement of the sport.

Diamonds player Donnell Wallam set up a national discussion when she wanted to be declared exempt from wearing the team jersey because it sported the Hancock Prospecting emblem.

Because Mrs. Rinehart’s late father Lang Hancock made discriminatory remarks about Aboriginal people in a 1985 television appearance, Ms. Wallam made the request. Hancock reportedly claimed, “I would poison the water up such that they were infertile and would breed themselves out in the future.”

As a result of Ms. Wallam’s colleagues supporting her, Mrs. Rinehart sensationally canceled her company’s significant sponsorship agreement with the sport’s regulatory body over the weekend.

Wallam has reportedly been “devastated” by Mrs. Rinehart’s departure, according to Fox Sports.

As a result of the pressure being “too much to bear,” Ms. Wallam was really going to wear the jersey with the logo, according to Kathryn Harby-Williams, CEO of the Netball Players Association.

In the end, Donnell requested an exception for herself, but it wasn’t granted since it was made very plain at a meeting last week that none of the players would get exemptions, according to Ms. Harby-Williams, who spoke to ABC Grandstand.

And there was a letdown because the players believed that Donnell would at the very least get an exemption at that time.

When Wallam made her debut for the national netball team during their match against England, it was said that she was ready to wear the logo on the shirt.

One of our First Nations players had a conscientious objection to wearing the emblem for only three games before asking for an exemption, according to Harby-Williams.

There is precedent for exclusions being granted in other sports. For Donnell, I would have anticipated and hoped that an exception would be granted.

“I believe it should be incredibly disheartening for everyone as a sport,” the author writes. “It reached to the point where Donnell was then actually going to agree to wear the dress and that was just because the pressure was too much for her to take.

While this is going on, some netball fans are appealing for a “white knight” Australian billionaire to “rescue” the sport, such as left-leaning Mike Cannon-Brookes, the creator of the internet giant Atlassian.

The 2022 Financial Review Rich List ranks Cannon-Brookes, who has a net worth of $27.8 billion, as the third-richest person in Australia. The software tycoon has a wide range of high-profile athletic ventures, including stakes in the Utah Jazz NBA franchise, the Jazz baseball team, and a 25% stake in the South Sydney Rabbitohs, which he will co-own with James Packer and Russell Crowe in 2021.

One user tweeted, “Hoping Netball Australia are already speaking to Mike Cannon-Brookes and Scott Farquhar – who seem to be strong supporters of both sports and social justice.”

Another person said, “Atlassian would be an excellent choice for Netball Australia.”

‘Win win win win for Atlassian, Australia, women in coding, and women in sport’ (and maybe, just a little, values of decency). Just an idea, the females might use a victory to show their unity.

Other Australians made fun of Netball Australia, joking that they would need to organize several Bunnings sausage sizzles to stay in business.

‘Yep. It’s that easy. For Netball Australia, it’s back to sausage sizzles and meat tray raffles, one social media user said on Twitter.

“How many sausage sizzles and cake booths does Netball Australia need to generate $15 million?” additional added

The girls’ lineups for the sausage-sizzle and cupcake stalls need to be finalized, according to the third person.

Establish a plan for who will launder the uniforms. Numerous young girls and women in Australia today have had their athletic careers wrecked.