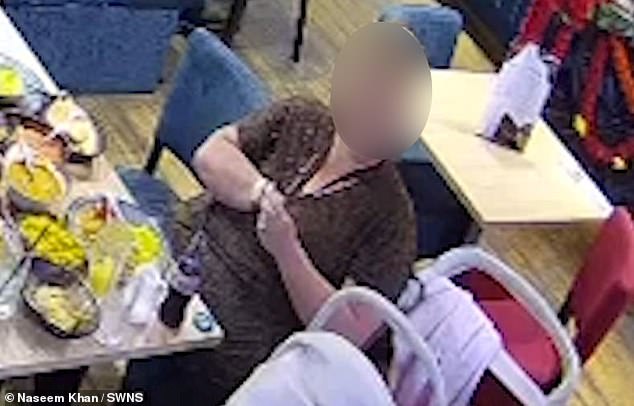 In order to avoid paying a £170 bill, a female diner allegedly took a piece of plastic she had been hiding in her bra out and put it in her food at this moment.

In a bowl of chicken curry, the woman is seen on CCTV appearing to tear the wrapper off a packet of cigarettes she had hidden inside her underwear.

The popular curry restaurant Namji in Milton Keynes is owned by 44-year-old Naseem Khan, who claims the family of five devoured their meal on Monday afternoon.

Despite being given a 20% discount, they made threats when the bill came and stormed out while complaining about the “plastic” in their food.

Since then, the police have confirmed that they are looking into a theft claim made against the family.

After feeding 150 families for free last Christmas, Ms. Khan became known in the area as the “Queen of Curry.” She claimed she would not have charged the diners for the meals if she had known they couldn’t afford them.

The fact that the woman decided to commit the con in front of her infant and two children, who ranged in age from ten to fourteen, was particularly disturbing, the speaker continued.

She clearly did a lot of planning beforehand, according to Ms. Khan. They wolfed down the food and nothing was left at the end, so you could say that they were not satisfied with the meal.

It is unacceptable in this society to act in this manner in front of children. She could have come to me if she was having financial difficulties, and I would have given her food at no cost. She didn’t do that, though.

The family arrived at the restaurant, which is housed in the Xscape shopping center, on Monday at about 3.30 p.m., according to Ms. Khan, who runs two eateries in the city.

A total of six main courses, including two Tandoor lamb chops, six drinks, and four side dishes were ordered, totaling a bill of £170.45.

She claimed though that the family soon started complaining about their food after being seated and later tried to pull off the bold trick.

Ms Khan continued: ‘This particular couple started to complain about the starters first, but they ate all of them. And when the main food came out, they ate all of it again.

‘Later, the woman called the waiter and said there was plastic in her food. The waiter said: “We don’t have this plastic in our kitchen, but I have the authority to give you 20 per cent off and not charge you for the dish.”

‘The husband of the woman then stood up and said: “I’m not going to pay”, and the waiter said: “Fine, do what you have to do” and walked away.

Waiters at the restaurant have been given ‘clear instructions’ not to confront any customer following problems with ‘very aggressive and abusive’ diners in the past.

Ms Khan said she realised the couple had pulled off the con after she reviewed footage on her security cameras.

She said: ‘We went on the CCTV to examine how things could have gone better. That’s when we discovered that she removed the plastic from her bra.

‘It was from a cigarette packet. She broke a piece off and put the rest back in her bra, then put it in the curry and called the waiter.’

Ms Khan gave away 250 meals for free each week during the pandemic to help homeless people across Milton Keynes, while also taking part in multiple fundraising projects.

Speaking at the time, she said it was ‘my responsibility to help others and give to charity’.

But she has been left angered by the family’s actions as she expressed concern they have used the trick to avoid paying for food at other restaurants.

She has since complained to police, adding that it is something she would ‘never expect or wish to see’.

A spokesperson for Thames Valley Police said: ‘At around 8.30am today (11/10), we received a report of a theft at Namji restaurant in Xscape in Marlborough Gate, Milton Keynes.

‘Officers are investigating and anyone with information should call 101 or make a report on our website.’