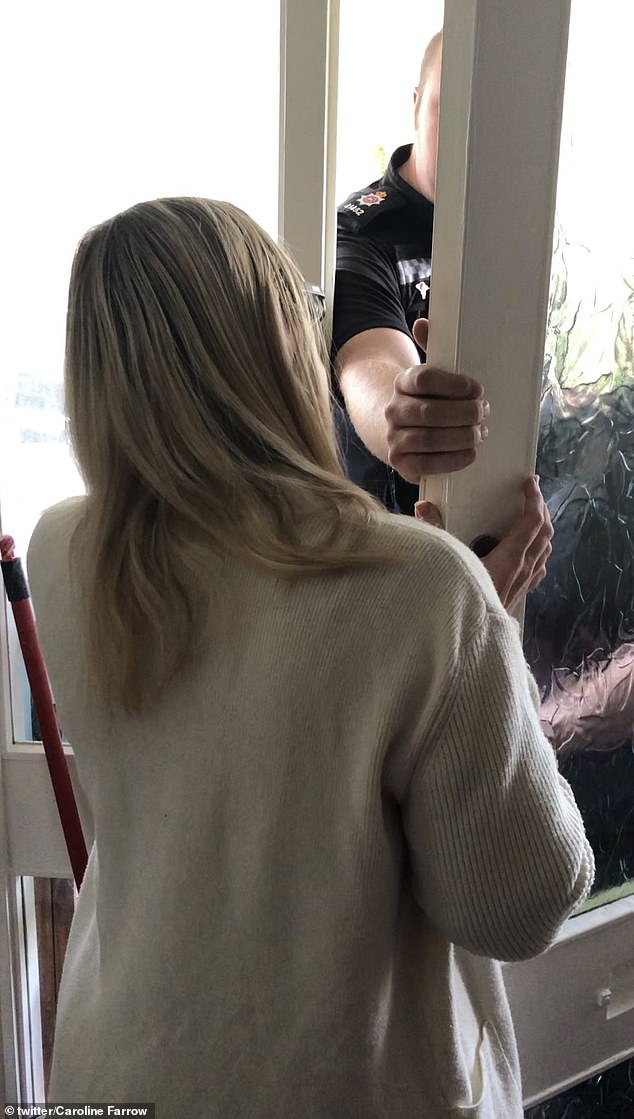 Images depict the moment a mother and gender-critical Catholic was arrested in her home for’malicious’ internet posts.

Caroline Farrow, a writer and mother of five, detailed her experience with Surrey Police in a lengthy online thread after two police officers allegedly ‘forced’ their way into her home on Monday night and arrested her.

On Sunday, when she was preparing a roast dinner for her priest husband Robin and their five children, two police officers allegedly requested that she join them for an interview under caution, with one ‘placing his hand on the front door to prevent her from closing it’

Mrs. Farrow is accused of posting’malicious’ content and ‘harassing’ other users on the internet platform in a series of anonymous June forum posts.

A Surrey Police spokesperson stated that officers attended the Guildford address as part of an investigation into ‘allegations of malicious messages and harassment’ and confiscated a number of electronic devices.

Temporary Detective Chief Inspector David Bentley stated that the devices were seized as police continue to “collect additional evidence and investigate the claim to confirm or disprove it.”

Mrs. Farrow has vehemently disputed the allegations, claiming that she was playing the organ at the Holy Angels Church in Aldershot throughout the Mass.

Mrs. Farrow told GB news yesterday evening, “I have been arrested over a Twitter dispute regarding gender issues.”

She said how authorities confiscated electronic gadgets, including some her autistic son uses for home schooling from her husband’s parish office next door.

Caroline Farrow, a journalist and mother of five, detailed her experience with Surrey Police in a lengthy online thread.

The dispute purportedly arises from a June series of anonymous forum posts on Kiwi Farms.

Mrs. Farrow described being taken outside and searched before being transported to a police station, where she was detained for many hours.

She stated, “One moment I was preparing dinner for my children, and the next I was having my socks inspected for drugs.” This consumed a full shift. What a complete and utter waste of police time!

“I was then handed further materials that the police accused me of mailing.” None of them was my fault.

Mrs. Farrow was released pending investigation in the wee hours of the morning yesterday.

Mrs. Farrow subsequently tweeted photographs reportedly depicting her being frisked by policemen in her driveway, claimed her personal devices were taken, and said she was required to relinquish her jewelry prior to being examined at the Guildford police station.

She wrote, “When read my rights and told that what I said could be used as evidence against me, I replied that ladies do not have a [aubergine symbol, which is commonly used online to refer to a penis].”

Farrow, who is the UK and Ireland head of the Catholic advocacy website CitizenGo, stated that the entire event left her feeling “harassed and anxious.”

She wrote, “I realize it’s protocol, but one minute I’m roasting chicken for dinner, and the next I’m having my socks tested for narcotics due of “insulting internet posts.”

It’s frightening that the cops can simply arrest you based on someone else’s statement. They could only respond, “We have received an allegation that requires investigation.”

Those convicted under the Malicious Communications Act may face up to two years in prison.

Mrs. Farrow, who once complained that her life was “invaded and dominated by mad trans rights activists,” had already received JK Rowling’s public support.

On the online site, Mrs. Farrow is accused of uploading “malicious” content and “harassing” other users.

She has vehemently disputed the charges, explaining that she was playing the organ at Holy Angels Church, Aldershot, during Mass.

In 2019, the same police department investigated Mrs. Farrow for allegedly using the incorrect pronoun to describe a transgender lady.

Susie Green, the leader of the transgender children’s charity Mermaids, and the Catholic activist known for her deeply held religious beliefs argued on ITV’s Good Morning Britain over Girl Guides permitting children who have changed gender to join the organization.

Mrs. Farrow later referred to Ms. Green’s daughter Jackie as “him” rather than “her” on Twitter and claimed that Mermaids encouraged child abuse. Five weeks later, Ms. Green filed a police complaint.

Mrs. Farrow tweeted, “What she did to her son [the youngest person in the world to undergo transsexual surgery] is illegal.” She mutilated him as a child by having him castrated and rendered impotent.’

The Surrey Police’s four-month investigation against Mrs. Farrow, which sparked significant controversy when it was made public, was abruptly terminated as it careened toward a complete fiasco.

A Surrey Police spokesperson stated, “On Monday, October 3, officers attended an address in the Guildford area as part of an investigation into accusations of malicious communications (sending indecent, obscene messages, threats, or information) and harassment.”

A 48-year-old lady was detained on suspicion of committing both offenses.

“A number of electronic devices were taken from this address as prospective evidence pursuant to section 19 of PACE.” When an electronic equipment is suspected of being used to commit a crime, for instance, it may contain crucial evidence and be routinely taken during an investigation.

The woman was transported to the Guildford Police Station for questioning. She has been released pending an inquiry, which is still underway.

Temporary Detective Chief Inspector David Bentley stated, “There is a substantial amount of social media commentary over the alleged circumstances surrounding this inquiry.”

“We do not have the liberty to detail every stage of our investigations or the particulars of a complaint on social media, as it is vital that we do not pre-empt or prejudice any future actions at any time.”

“When we receive an allegation of a crime, in this case that an extremely offensive message was sent, it is our responsibility to evaluate the claim with any relevant evidence to determine if a crime has been committed.

If so, we will collect additional evidence and conduct an inquiry to substantiate or reject the accusation. Exactly same procedure is being followed in this instance.

“The investigation into these charges is underway, and the relevant questions are being conducted.”

We are obligated to maintain the integrity of an investigation, so we will refrain from giving updates on this matter.