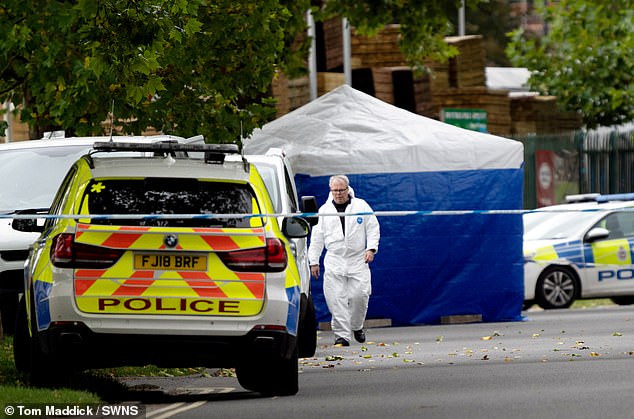 After a possible gunshot occurred this morning in Derby in front of a brand-new police station, a guy was taken by ambulance to the hospital.

After witnesses reported hearing “six gunshots” at approximately 10.30 am coming from a Farmfoods parking lot on Ascot Drive in Derby, a B&M store had to be evacuated.

The incident happened just across from brand-new police and fire stations that cost £9.5 million and opened in April of this year.

Officers are now on the scene at an incident at Derby’s Ascot Drive police station, according to a spokeswoman for the Derbyshire Police.

A guy has been brought to the hospital, and Ascot Drive is presently blocked.

The air ambulance that landed at Gosforth Road, off Ascot Drive, transported a man to the hospital, according to the force.

Images from a drone seem to show a broken glass door at the police station on Ascot Drive as well as blood-stained clothing and medical equipment.

Among the bandages, tourniquets, and open syringe packages in the background of the image are what seem to be a pair of black boots and a jacket on the road near the gates.

The incident, which took place outside the police station and not within, was verified by Derbyshire Police.

According to a spokeswoman, the wounded individual was not an officer.

‘A handful of our colleagues heard several big bangs, and the next thing we knew, the location was crawling with cops,’ a worker at a neighboring fence company recalled.

They evacuated Farm Foods and blocked up all the routes as a chopper flew above.

It everything took place on the police station’s grounds, according to a different witness who wished to remain unnamed.

“The gunshots have broken through the windows of the police station.” The parking lot is covered with blood.

We have heard that an officer may have shot someone, but we are unsure.

Ambulances and police officials have been seen at the location since morning.

According to reports from the location, there are seven or eight police vehicles there, and traffic is being stopped from entering the restricted route.

We were at a factory just along Ascot Drive when we heard around six gunshots, a manufacturing worker said.

“When we rushed outside, we saw six to eight police vehicles sealing the road and shooting past.

“Everyone was turning around, it was very alarming,” someone said.

Joanne Kennedy, a 30-year-old mother of two, added: “As I was walking inside the store, I heard incredibly tremendous smashes or bangs that sounded like beer barrels coming off a truck.”

About a minute later, there were police everywhere and sirens were blasting. We were all advised to evacuate the area and to report back.

“It was like a scene out of a movie.” When I heard a chopper approaching, it quickly took off again.

Additionally, 28-year-old Emma Smalley, who was doing her shopping at B&M at the time, said: “We heard around six enormous bangs and didn’t know what it was at the moment.” All people were evacuated. Everything had to stay in there, unfortunately.

I just assumed it was thumping. I wasn’t sure whether it was a delivery for B&M or if it was a warehouse employee. It was loud.

The general public has been warned to stay away from the location, and reports from the site claim that no entry is being allowed.

The incident happened around a mile south of Pride Park Stadium, home of Derby County FC.

»Derby B&M is evacuated as police respond to ‘shooting’«