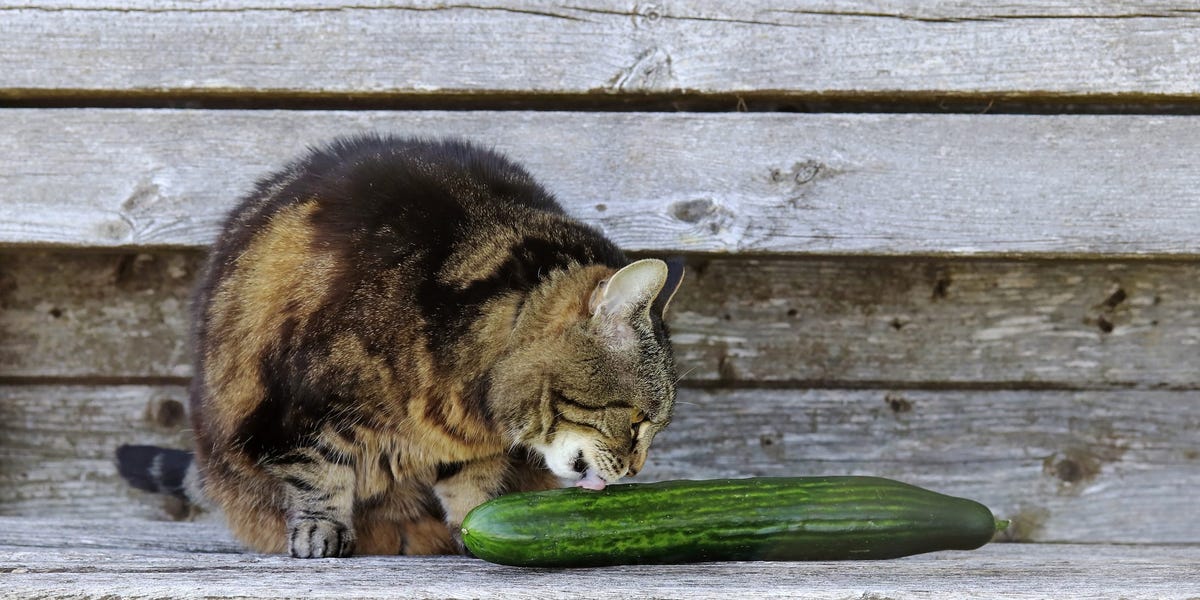 The internet is filled with videos showing cats with wide-open eyes jumping or fleeing from cucumbers. And while they are intended to be humorous, animal experts warn that this fad can harm your cat and your connection with them over time.

Continue reading to discover why cats are afraid of cucumbers and why you shouldn’t laugh at their expense.

Why do cats have a fear of cucumbers?

In addition to being predators, cats are also prey. Even though they are domesticated, they have a strong inclination to remain vigilant for danger, particularly other creatures that could wish to eat them.

Dr. Amanda Takiguchi, a veterinarian, explains, “Cats are suspicious creatures, and many cats may react by jumping, running, and freaking out rather than investigating.” “They have this reaction because it may surprise a larger predator and allow the cat to escape.”

Most cat-cucumber films include someone placing a cucumber in an unexpected location, such as a cat’s water bowl or a doorway. Takiguchi states that this awakens the fear-defense reflexes of a cat. Comparable to the human fight-or-flight response

Essentially, the cat’s reaction has nothing to do with the cucumber.

“All they know is that something crept up on them while they were eating, and they will not stop to determine what it is,” explains Takiguchi.

According to cat behavior analyst Joey Lusvardi, humans and other animals would likely react similarly.

“If you’re searching for something in your refrigerator and when you turn back, there’s a box laying on the ground behind you that wasn’t there before, you’ll likely be startled and perplexed,” he says. “The box itself is probably not alarming, but this is not a natural occurrence.”

Is it safe to use a cucumber to prank my cat?

Wondering if you should participate in the cat-cuke craze?

“The answer is unquestionably no,” adds Lusvardi. They are extremely afraid, and you are intentionally frightening your cat.

That, he maintains, is cruel. And it could eventually lead to behavioral difficulties.

“Your cat may enter a defensive posture, which may involve fleeing the source of its anxiety or even attacking it,” adds Lusvardi. If this occurs, your cat may unintentionally attack you, other cats, or other household animals.

If you do this too frequently, your cat will feel unsafe at home, especially in areas where you have previously placed a cucumber, such as the food dish.

“It is a cruel ploy that teaches a cat that its feeding bowl is not a safe place and, if repeated, can cause psychological damage to the cat by leading it to experience anxiety whenever it is in that position,” she explains.

Chronic stress can result in withdrawal, aggression, greater stretching, defecation outside the litter box, and other undesirable behaviors.

Instead of seeking amusement at your cat’s expense, take the time to form a bond with them. Follow their lead and allow them to start attention, such as pats. When they interact with you, provide them with a treat or play with them to provide positive reinforcement.

As with many problematic social media phenomena, you should avoid frightening your cat with a cucumber.

“It does not only benefit your cat, therefore avoid this fad,” adds Lusvardi.

Using a cucumber to terrify your cat can cause them to feel agitated and afraid at home. Over time, this might lead to undesirable behaviors such as aggressiveness and urine marking.