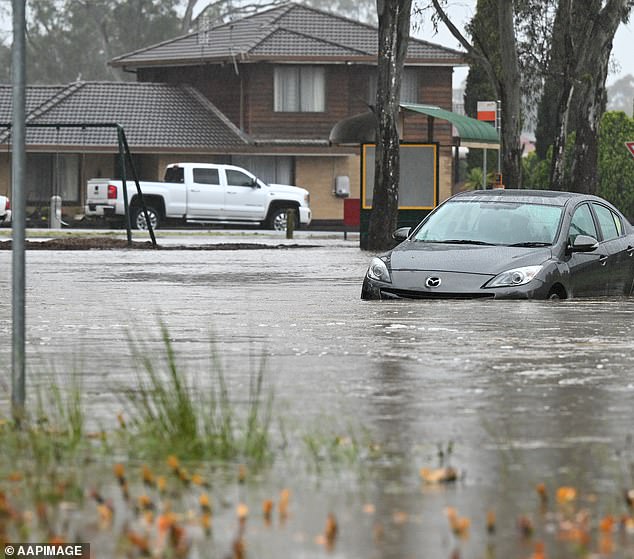 After a single day of respite, Australia will once again be inundated with precipitation beginning Sunday.

Another low pressure system and trough will bring extensive rain and storms, as well as more widespread flooding, to the nation.

In the next days, a further 100mm of precipitation is forecast for the eastern states of Australia, with the meteorological office reporting that rain and thunderstorms are already developing in South Australia and interior Queensland.

On Wednesday, the weather system will bring’much more widespread’ rains and’re-established floods’ to the southeast.

This is particularly troubling news for the state of Victoria, as the number of communities receiving evacuation orders continues to climb as widespread flooding is anticipated to endure for up to six weeks.

In heartbreaking news, the body of 71-year-old Kevin Willis, a victim of the Victorian floodwaters, was discovered in the garden of his High Street home on Saturday morning.

Premier of Victoria Daniel Andrews announced at a press conference on Saturday that a 71-year-old man was discovered dead in the backyard of his Rochester home.

“We will stand with that family and other families touched by this, but it brings home to us all how grave and potentially dangerous this situation is…

“We are all working as diligently as possible to ensure the safety of the public, and we hope that this will send a message about how serious this situation is.”

Victoria Police issued a statement on Saturday stating, “Access to the area was difficult due to the surrounding floodwater, but emergency personnel were able to extricate both the dead and an uninjured woman who was trapped at the residence.”

Hundreds of residences in Rochester were inundated by the Campaspe River, one of dozens of streams that overflowed their banks and submerged northern Victorian towns.

Friday night, the River at reached 115.7 AHD, which is 300mm higher than the previous record recorded in January 2011.

According to Mr. Andrews, 466 homes have been inundated with water above the flooring, and an additional 500 are temporarily isolated.

He stated that 344 highways had been closed owing to flooding.

In the past twenty-four hours, more than 350 rescues were conducted.

Mr. Andrews stated on Saturday that 3,000 applications for emergency compensation had already been received from Victorians.

Jonathan How, a senior forecaster with the Bureau of Meteorology, told Daily Mail Australia that Tasmania, Victoria, and New South Wales would only be spared for a few days.

According to him, a growing weather system will bring showers and thunderstorms to South Australia and inland Queensland beginning on Tuesday, and then to the rest of the east coast from Wednesday to Saturday.

He cautioned, “This will become much more pervasive.”

Thus, widespread precipitation is anticipated, which could lead to fresh flooding in sections of the south-east and the east.

Mr. How expected the heaviest precipitation to fall in south-east Queensland and northern New South Wales.

According to him, this region will receive between 50 and 100 millimeters of precipitation, although areas further south are still susceptible to substantial local precipitation associated with thunderstorms.