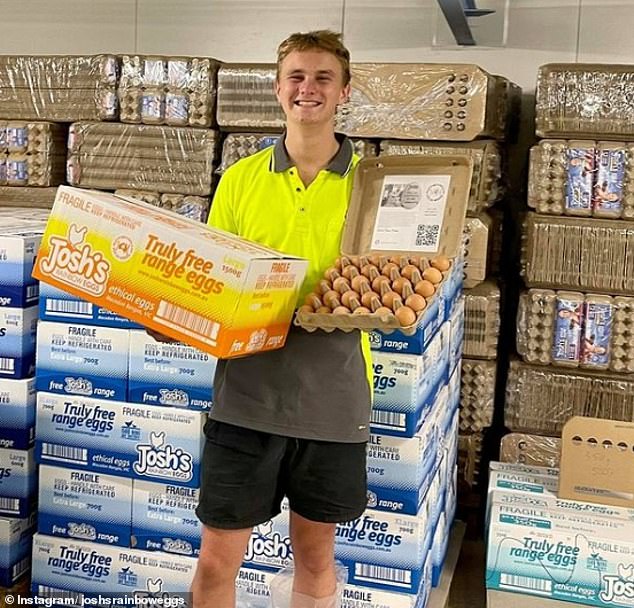 Before he was old enough to get a driver’s license, a business-savvy youngster expanded his egg operation from a farmer’s market booth to become a supplier to some of Australia’s largest supermarket chains.

In 2008, the Murray family relocated to a former pine plantation in Kerrie Valley, which is approximately 70 km northwest of Melbourne. They were horrified to discover that the previous owner had left behind 40 chickens.

A few years later, nine-year-old Josh made a bargain with his parents that he would take care of the hens in exchange for the ability to sell their eggs. Josh was eager to get some more pocket money.

That is when Josh’s Rainbow Eggs, his company, was founded.

His 54-year-old mother, Tamsyn, told news.com, “He looked after the chickens, he had to feed them, clean up the coup, the hens were his job. He began selling to neighbours but we only had three.”

Josh moved his business to the nearby businesses and a farmers market, but he soon realized he had too many eggs and not enough consumers.

When Josh got a job at the nearby Foodworks, Ms. Murray said she realized they should devote their whole property to his chickens.

After that, everyone had to work together.

In order to gather eggs from 1,500 hens, the firm employed its first outside worker in 2012. Josh’s family stepped in to assist operate the business.

Their farm had 10,000 chickens and eight workers after another two years.

It’s completely unlike the hills covered with forest where we reside. Because they have so much area to graze, having hens here is simpler, according to Josh.

“The flocks are tiny, the chickens are less anxious, and they can freely enter and exit the shed.” They use it as a bed and a location to hatch eggs.

When it rains, they sometimes go inside. In essence, the chickens are outdoors.

Josh, who was 13 at the time, decided to expand his company in 2015 and sent Coles a sincere letter outlining the benefits of carrying his goods.

Later that day, he got a message asking him and his mother to a meeting with executives in Melbourne.

Josh also went to Woolworths since he didn’t want to put all his eggs in one basket.

The opportunity to sell his farm-fresh eggs for roughly $8 per dozen was seized by both supermarket behemoths.

In addition to Foodworks, they are also offered by IGA and LaManna Supermarket.

More than 100 retailers in Victoria sold Josh’s Rainbow Eggs during the previous fiscal year, which resulted in a $5 million yearly revenue.

When tens of thousands consume your eggs each week, Ms. Murray said, “That’s a lot of people.”

The Victorian Young Achiever Award for Environmental Sustainability was given to Josh in 2019.

His company prioritizes the welfare of its chickens and is powered by a 3 KW off-grid solar system.

»Coles and Woolworths pay boy $5m/year for his great idea«