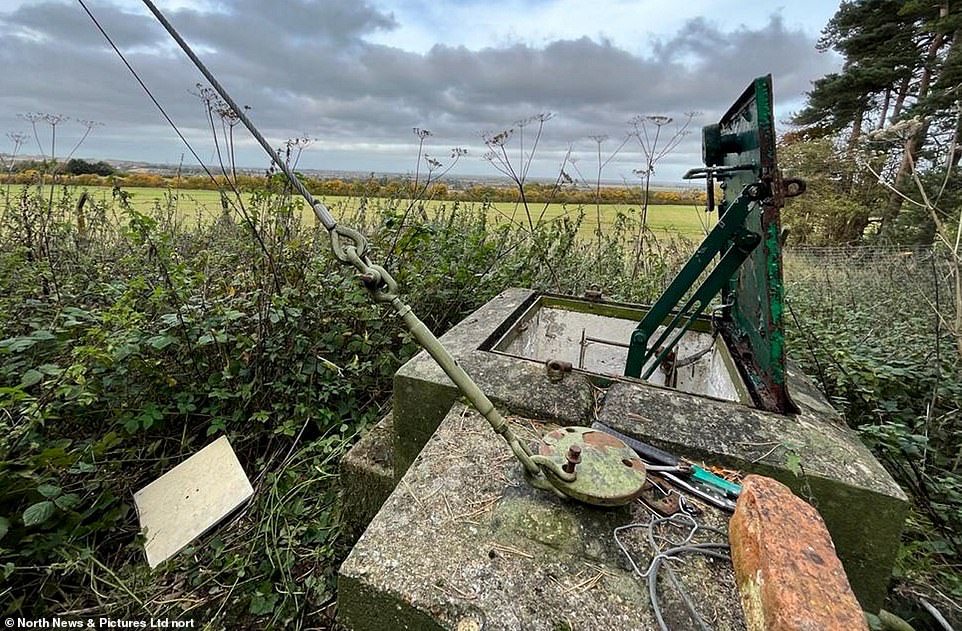 A Cold War nuclear bunker equipped with gas masks, body bags, and a red telephone box in case of a predicted Russian attack has been put up for sale for £25,000.

Almost two decades ago, the Royal Observer Corps monitoring post in Louth, Lincolnshire was purchased on eBay on a whim.

However, despite mounting fears of a nuclear apocalypse at the hands of Vladimir Putin, the owner has opted to sell it.

Mark Colledge, 64, purchased the underground vault, which lies beneath a field between the A16 London Road and Kenwick Hill and is only accessible by a 14-foot shaft, in 2003 for a cheap price of £12,500 after viewing it online.

The army veteran stated, “It was constructed the year I was born, and I believe I purchased it during a midlife crisis.” I deemed it “cool” and decided to acquire it.

“I maintain a trailer nearby and have been utilizing it as a sort of vacation house. I sleep in the bunker and take showers in the trailer.

A Cold War nuclear bunker equipped with gas masks and body bags in the event of a predicted Russian invasion is for sale for £25,000.

The underground vault is only accessible by a 14-foot hole and lacks hot water. However, it is powered by solar and wind energy and contains a red telephone box in case of a nuclear strike.

‘I am selling because, given the worldwide economic crisis, it seems like a good time, and I haven’t been there in years. I’d like some cash for a vacation.

I have body bags and gas masks in there. This relates to my military training and how to respond to an attack.

There is a bed and a sleeping bag, but that is about all.

‘There is also a red box telephone, so in the case of a nuclear attack, that will be the only phone that works – not that there will be many phones left to use.

It also has solar and wind power.

The three-person vault was constructed in 1959 in reaction to the growing threat of nuclear assault in the 1950s.

Three observers would have taken refuge in the hold and reported on the fallout in the case of a nuclear attack.

The observers received two weeks’ worth of food and water, as well as access to landline telephones and radio communication.

One of only 258 existing British bunkers, it lies beneath a field between the A16 London Road and Kenwick Hill.

Mark Colledge, 64 (right), purchased the underground vault for the discounted price of £12,500 in 2003 after viewing it online. However, he stated that he hasn’t used it in years and that the ongoing conflict in Ukraine makes it a good time to sell.

The bunker near Louth is identical to more than 1,500 constructed throughout the United Kingdom beginning in the late 1950s. And they were not inexpensive, costing as much to build as an average terrace house.

After the fall of the Soviet Union, soldiers stopped using the hideaways for weekly training and they were decommissioned in 1991, with the remaining underground posts closing at the end of September that same year. Only 258 of these war dens remain.

Mark, of Saltburn-by-the-Sea, added, ‘When I bought it, I believe it was a male menopause symptom, similar to purchasing a new vehicle.

I would be content to receive my money back.

Jim Demitriou, national valuer at SDL Home Auctions, remarked, ‘It’s a fantastic property for anyone in search of an off-grid retreat.

It is a piece of British history, thus it may appeal to those who enjoy visiting historic sites.

Mr. Colledge, an Army veteran, stated that he used to park his camouflage trailer close to the bunker.

Jim Demitriou, an estate agent, believes it will appeal to “someone interested in old places.” It was constructed in 1959 in reaction to the growing nuclear threat of the 1950s.

I would suggest buyers to consult planning permission or their local government to determine what they can do with the property.

Before it was posted on our website, maybe four or five individuals inquired about it. We anticipate much interest in the bunker.

“I am quite enthusiastic about this property. I’ve never sold a nuclear bunker before. The suggested price is £25,000, however the highest bidder will win.

The property will be auctioned off by SDL Property Auctions on November 24.

What will occur if the nukes fail? Expert explains which sections of London, New York, and other cities will be demolished quickly by a Putin strike… where you would have the highest chance of survival

The thought of a nuclear assault on the West was once the stuff of dismal science fiction, but Vladimir Putin has repeatedly embraced this terrible scenario as his war in Ukraine unravels.

Even though most analysts think that a nuclear strike on Paris, London, New York City, or Washington, D.C. is extremely unlikely, it cannot be ruled out. Since the Cuban Missile Crisis, President Biden has personally warned that the world is now closer to “Armageddon” than ever before.

As we stare down the barrel of a new nuclear crisis between east and west, it raises the question: What would truly occur if Russian nuclear weapons struck a large city?

Middlebury Institute professor Dr. Jeffrey Lewis stated, “The initial effect will be a fireball that will vaporize anything within it.” This will travel just over a half-mile from the explosion’s epicenter.

If dropped on Westminster, the Houses of Parliament, Downing Street, St. Thomas’s Hospital, and Westminster Abbey would be entirely annihilated, and everyone within would be killed instantly.

By targeting New York’s financial area, One World Trade and the western end of the Brooklyn Bridge would be reduced to ash. A detonation atop the White House would destroy everything within four blocks of Pennsylvania Avenue. The Place de la Concorde and much of the Champs-Elysées would be vaporized if the Elysee Palace were attacked.

Dr. Lewis added, “then you’ll have a shockwave that will severely damage even the most solidly constructed concrete buildings out to just over a mile from the explosion, crushing to death everyone in that radius.”

For London, this would involve the destruction of Buckingham Palace and Victoria and Waterloo stations, two of the city’s main transportation hubs. The entirety of Soho, half of Mayfair, The Oval cricket pitch, and practically everything between Chelsea Bridge and Blackfriars would become extinct.

This includes the Tower of London and Battersea Power station in London. The majority of Hyde Park and half of Regent’s Park, as well as Chelsea, Knightsbridge, and Belgravia. The destruction would stretch from Camden to Brixton.

Everyone within that radius would also be given an extremely high dose of radiation. For many people it would prove fatal, but even among survivors up to 15 per cent would likely die later of cancer linked to the blast.

Dr Lewis adds: ‘Radiation poisoning is just a really cruel, miserable way to die. The immediate effects are vomiting, nausea, and diarrhea – people can rally and seem much better, perhaps for hours or days – but then the symptoms return and get much worse.’

The effects of a 500kiloton nuclear bomb – a large device but certainly not the largest in Russia’s arsenal – being dropped on London are illustrated above. Everything inside the yellow and red circles would be completely destroyed, with an almost 100 per cent casualty rate for anyone inside. Third degree burns are possible up to the edge of the orange circle