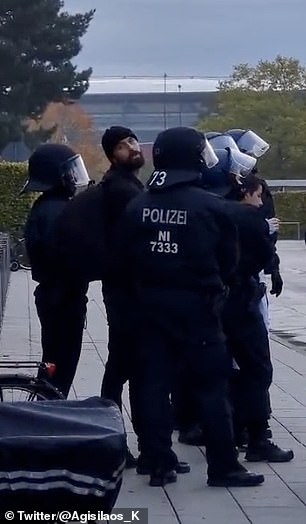 Eco-protesters who attached themselves to the floor of a Volkswagen factory and then complained their hands hurt and they couldn’t use the restroom have been detained.

Late Wednesday night, nine members of the Scientist Rebellion organization broke into Autostadt, a museum and car dealership opposite Volkswagen’s major facility in Wolfsburg, and nailed themselves to the floor of the Porsche pavilion.

They vowed to continue their demonstration until Volkswagen agreed to persuade government officials to decarbonize the transportation sector.

After only a few hours, however, they began to protest that they had no food and that the personnel had refused to offer them a bowl to defecate in.

Gianluca Grimalda, who had announced a hunger strike, then complained that his hand, which he had coated in superglue and adhered to the floor, was bloated and that doctors had warned him he was at risk for blood clots.

After only one day of protesting, he consented to leave for medical care and was arrested before riot police rounded up the other protesters.

Another demonstrator, Agisilaos Koulouris, tweeted a picture of scores of riot police inside the museum with the comment, ‘They are arresting everyone.’

Scientist Rebellion promotes itself as a community of scientists “ready to expose the truth about the climate problem and act on it.”

They are pressing Volkswagen, one of the major automakers in Germany, to do more to combat pollution.

Online images of the demonstration depicted six protestors rooted to the ground in front of three Porsches.

In the dealership, they had also affixed fake newspaper front pages reporting on global warming to autos.

As the demonstration began, Mr. Grimalda tweeted, ‘Along with 15 other Scientist Rebellion members, I have invaded the Porsche tent at Autostadt.

Some of us are participating in a hunger strike until our demands to decarbonize the German transportation sector are satisfied.

Two hours later, however, he began to complain that the innkeeper had “refused our request to give us with a bowl to urinate and defecate in a reasonable manner while we are stuck” and “shut off the heating.”

He continued, “People who require assistance can exit the building, but they cannot re-enter.” Volkswagen has given us with food, and we are unable to order it.

“The lights are out. Random, unscheduled searches conducted by security guards equipped with bright torches. Police just came in.’

After spending the night sleeping on the floor, Mr. Grimalda tweeted a picture of his swollen hand along with the message that a physician had been called in to examine him.

He stated, “Doctors determined the danger of life-threatening blood clots in my hand and advised a transport to the hospital immediately.”

My health is, of course, my top priority. I voluntarily left the group and was transported to the hospital.

Therefore, Mr. Grimalda was hauled out of the pavilion where he was allegedly detained well over a day into the protest, despite none of his demands being met.

Then, Mr. Koulouris tweeted, ‘Now, just a few minutes later, they’re warning us to leave immediately or we’ll be detained’

Images depicted dozens of riot police inside the pavilion, followed by video of arrests occurring outside.

Today, Just Stop Oil protestors in Knightsbridge, central London, fastened themselves to a road in front of the world-famous Harrods department store after spraying orange paint across the building.

Just Stop Oil protestors attempted to block another route and splattered paint on an Aston Martin shop earlier this month.

And on Saturday, two protestors who threw tomato soup over a van Gogh painting at London’s National Gallery appeared in court.

The picture was protected by a screen, but the frame was damaged, according to the Trafalgar Square gallery.

In Rome, angry motorists have resorted to hauling away a group of eco-protesters who stirred rage by blocking a busy highway.

Monday rush hour traffic on the Grande Raccordo ringroad outside the Italian capital was blocked by Last Generation demonstrators carrying giant posters condemning the use of fossil fuels.

Angry scenes ensued as drivers exited their vehicles to remonstrate with the eco-extremists and beg them to move out of their way.

Some individuals took matters into their own hands by forcibly removing demonstrators off the way.

One motorcyclist pleaded loudly, ‘I need to go, I’m a doctor,’ to be allowed to pass.

A female activist, however, refused to let him entry without his medical identity and asked that he produce it.

Eventually, he presented his identification card, and the demonstrator permitted him to walk over the human barricade.

»Climate activists detained after attaching themselves to Volkswagen factory«