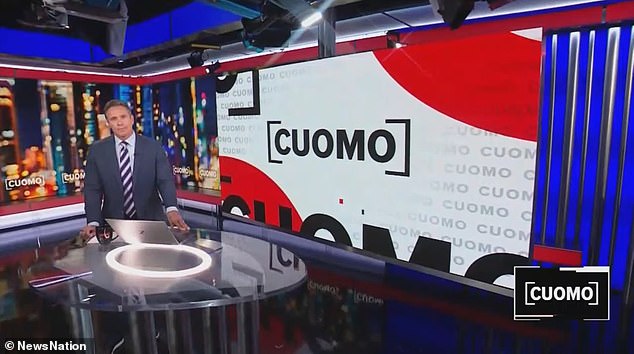 Chris Cuomo has made his first appearance on the radio since being fired from CNN. He claims to have “learned lessons” from his humiliating dismissal and pledges to fight “groupthink.”

The 52-year-old Cuomo said, “This program will be timely, but it won’t be normal.”

“I’m here to expose the game; I’m not going to follow the pack.”

After it came to light that Cuomo had been covertly counselling his brother Andrew, the then-governor of New York, on media strategy when he was faced with charges of sexual harassment, Cuomo was dismissed from CNN in December 2021.

The fallen star anchor claimed to have had time to reflect on and learn from his errors on Monday night.

Cuomo said that he thought “the past is prologue,” quoting from Shakespeare’s The Tempest.

He informed the audience, “Everything that has transpired before has led to this moment.”

I have acquired lessons—both good and negative.

Cuomo thanked his friends, family, and therapist for their support and expressed his excitement to be a news anchor once again.

He promised to “do more” and “not only play, or even referee, the game,” saying he was “humbled by what transpired, and eager to do better than before.”

According to The Washington Post, NewsNation’s prime time audience last year was merely 46,000 people on average.

Cuomo acknowledged last week that his new program was a step back, but he said on Monday that he still had a lot to offer.

He argued that since both his father and brother had served as governor of New York, he had unmatched political expertise.

“I am well aware of the arrangement.”

I wish to share all of it with you in order to support you.

I want you to know that you can depend on me to go where it counts.

Additionally, he said that he wanted to provide “depth of conversation.”

As agitated and noisy as our society might be, he said, “ordinary folks like you—not the fringe—are the vast majority.”

“We still have a long way to go.” Division that is produced is used to influence us.

He said that his program will be “old school” and would encourage viewers to call in.

He said that he preferred conversation to online rants, preferring “not raging radicals or someone with keyboard biceps.”

In the first week of its run, Anthony Fauci, Whoopi Goldberg, Bill Maher, and Tulsi Gabbard are scheduled to appear on his NewsNation program.

Bill Maher, Dan Rather, and John Bolton were among his guests on Monday.

Cuomo made his debut just a few days after making the implication that the new program was inferior to his prior primetime glories.

The editor of NY Magazine called attention to the discrepancy between Cuomo’s lawsuit’s assertions regarding his future employment and his new primetime program during his appearance on On With Kara Swisher last week.

According to reports, Cuomo will get $1 million for his new hosting position on NewsNation, a significant decrease from his prior $6 million annual salary at CNN.

Swisher read a sentence from his complaint and then questioned Cuomo, “And you have a new job now, which I’d like to speak about, so you can be employed presumably.”

Do you really think that where I am right now is equal to where I was? Cuomo answered.

What you do with it depends, Swisher said.

In my dining room, I’m speaking to you. I was CNN’s top program, and I would be as well known in Malawi as I would be in Milwaukee. That is much different.

Since leaving CNN, Cuomo has continued to make news despite his absence from the broadcaster’s chair.

Many have hypothesized that Cuomo may have started the current CNN upheaval by leaking information about former CEO Jeff Zucker’s consensual relationship with the network’s Executive Vice President and Chief Marketing Officer Allison Gollus. This information ultimately resulted in the executive’s termination.

Cuomo fiercely rejected the allegations when Swisher asked whether he shared information about the romance.

No, he said, “I didn’t.” People think a lot, and often they do so for negative, selfish, or hurtful reasons, according to Cuomo. “I’m not the type to play small, take gotcha shots, and pursue people,” he said.

The revelation of the connection caused him “no pleasure,” he said, adding that Zucker “given me huge possibilities.” He went on to name Zucker “one of the finest creators of television.”

Despite the complimentary remarks for his former employer, Cuomo angrily noted that, prior to being fired, he was “known in Malawi as much as I would be in Milwaukee.”

Swisher skimmed over a sexual assault complaint made anonymously against Cuomo and just asked whether he refuted the claims.

The former CNN spokesperson just said “yes” to each of Swisher’s inquiries regarding the topic before she went on to the next one, declining to go more.

When it came to his brother’s charges of sexual harassment, Swisher was likewise forgiving of the former CNN anchor, and the younger brother of the former governor diligently avoided the questions.

Cuomo said, “What’s the difference between assisting him personally and strategically?” when asked whether he thought it was improper for him to assist his brother in escaping the accusations.

Cuomo insists that there is nothing improper with what he did and claims that since he wasn’t denying his brother’s accusations, he was free to assist him.

Cuomo said, “I was assisting him in ways that I felt were appropriate.”

Cuomo stated he “knows where the line is” at the moment he apologized live on CNN.

In his podcast, he addressed the issue of conflict of interest once again, stating, “I genuinely do regret how things turned out, but I will never regret assisting my family.”

After he was accused of acting inappropriately against 11 women, Andrew Cuomo’s political career came to an end.

After months of resistance, he resigned in August 2021, and all criminal accusations against him were ultimately withdrawn.

The claims against Cuomo were made by Brittany Commisso, who said that in late 2020, while they were alone in his Executive Mansion office and she had been called in to assist with his smartphone, Cuomo pulled up her shirt and grabbed her breast.

He adamantly denied doing it, claiming that “it would be an act of lunacy.”

In a report by the Democratic state attorney general Letitia James that was published in August 2021 and found that Cuomo had harassed 11 women sexually, Commisso’s testimony was among the most incriminating.

Chris insists that he was just a “side piece” in the efforts and not “the primary player” in helping his brother get beyond the accusations.

This idea is supported by notes from Melissa DeRosa, his brother’s senior assistant, who wrote, “Chris sends me a lot of stuff a lot of the time.” I avoid doing half of it. He offers unasked guidance.

A large portion of the 15,000 COVID fatalities in nursing homes in New York were attributed to the prior governor, who had made the facilities take in COVID-positive patients at the outset of the epidemic.

During this time, Chris slyly interviewed his brother on his CNN program and confessed to Swisher that he was aware of the conflict of interest “all day long.”

When I did have him on, it wasn’t about news and covering a governor of state, he said in defense of his choice to do that. Despite speaking with him for a news program, he said, “That’s all I’m saying.”

»Chris Cuomo ‘learns lessons’ after being fired from CNN«