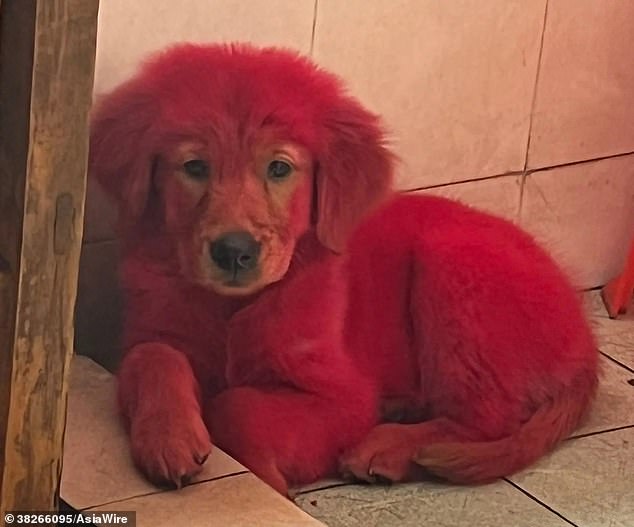 Due to concerns that the dog might be harmed, several online users voiced concern when a Chinese dog owner dyed his golden retriever red to show him off on social media.

In a video, the owner, who is from Guangzhou in southern China’s Guangdong Province, is shown holding the puppy, who is now a dark pink, and forcing him to look at the camera.

Around the eyes and nose of the unimpressed-looking pup’s face, traces of golden fur can still be seen, but the remainder of his coat has changed to a vivid pinkish red.

Another video shows the cat with what looks to be a pair of black spectacles while the videographer chuckles.

To demonstrate the puppy’s change to its fullest, he is finally dragged around the ground.

Some online users raised concern about whether the dog might be harmed by the pet owner’s usage of human hair color.

The deeply inked owner, however, said that he had talked to a veterinarian, who had assured him that the color would not affect his Golden Retriever in the least.

All fine, all the dogs within a 10-mile radius are coming to laugh at him right now, one commenter said.

How long does it take for this to disappear, a different social media user questioned?

Another person said, “This is the most stylish puppy on the Internet.”

Only one national law in China offers protection for certain wild animals, hence there are no laws in place to safeguard animals.