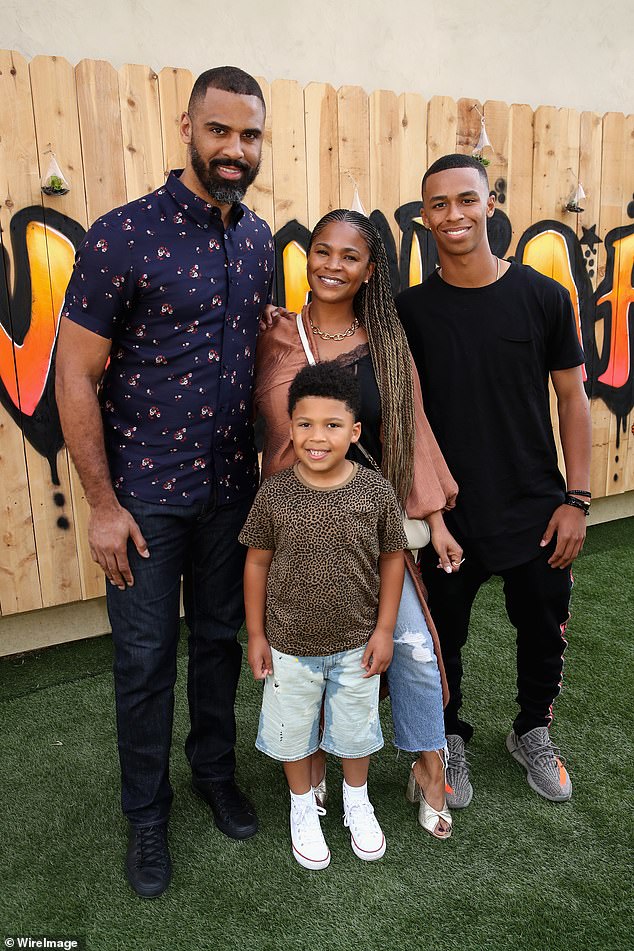 According to TMZ, the lady, who has not been publicly named, was granted considerable authority to choose the hotels and modes of transportation for Udoka’s team-related travel.

The same lady was in charge of scheduling Long’s travel when she came up to Boston to see Udoka or go on the road with him. She was also engaged in making arrangements for her to relocate to Boston permanently.

It’s unknown whether she used her status to arrange secret getaways with Udoka to carry on their relationship.

Long and her 10-year-old son, who she shared with Udoka, Ime, had just recently moved to the city.

Long is aware of the employee’s identity, despite the Celtics withholding her name from the media.

Brad Stevens, the club’s president, broke down in tears at a news conference on Friday and expressed how distressing the controversy had been for other female team workers due to the rife speculation about who may have had the affair.

The Boston Celtics writer Amanda Pflugrad criticised the ongoing social media rumours earlier on Saturday about the name of the female employee who had a “inappropriate” connection with coach Ime Udoka.

This Thursday, the club issued Udoka a one-year suspension and a “substantial financial punishment” for “many infractions of conduct rules,” although it was decided to withhold the identity of the lady involved.

Pflugrad, a Celtics employee herself, repeated the claims made by many that this has generated unjust internet speculation and implicated other innocent women.

She posted on Twitter on Friday, saying, “Watching these past several days develop has been sad as a female of the Celtics organisation.”

It disgusts me to see the identities of uninvolved individuals, like myself, carelessly bandied around in the media. This is a step backward for female athletes who have fought hard to earn their place in the sports world.

It’s time to speak out on this issue, and to my female employees, I see you and I am always here #womeninsports, she said beside the post.

Fans have been using social media in recent days to try to figure out the woman’s identity, and a number of conspiracy theories have been widely circulated.

Naturally, this has resulted in Pflugrad and other innocent individuals’ reputations being damaged, and Stephen A. Smith is among those pleading with the team to provide further details.

He said on his ESPN First Take programme that “Ime Udoka is an unhireable guy at this very juncture in time.” But I would assert that the unhireable fraction is mostly a result of the fact that the information was leaked and is now being discussed in public.

The lady who chose to date him consensually isn’t breaking the rules [of the team]? We don’t know who she is, but he gets to be identified and listed on the front street.

What about the other Celtics organisation women who have suffered because false assumptions were made about their participation? All the other ladies who have had their names announced in the streets would feel more at ease if you knew precisely who it was. Where are they at?

When Udoka’s fiancée, actress Nia Long, claimed to have been ‘blindsided’ by the affair and learned of it only days after returning to Boston to be with his longtime boyfriend, the volatile situation at the Celtics reached new heights on Friday.

The Fresh Prince of Bel Air actress and Udoka have been together for almost ten years and have a 10-year-old kid together, but last week their happy family life came to an end.

Long reportedly learned about the affair only after the Celtics announced their coach’s suspension.

‘While I contemplate the recent events, I ask that my privacy be respected.

The Athletic claims that certain Celtics players were aware of Udoka’s connection in July, and club managers at first believed the union was amicable.

The woman reportedly recently accused Udoka of making improper remarks toward her, according to insiders, which prompted the team to conduct internal interviews.

Long, meantime, rose to fame for her part as Will Smith’s girlfriend Lisa Wilkes in the Fresh Prince of Bel Air.

She also had roles in Soul Food, Big Momma’s House, and Boyz In The Hood.

In addition, the adored actress has won three NAACP Image Awards and a Black Reel Award.

This week, when word of the affair circulated on social media, Long’s admirers and well-known pals sprang to her rescue.

Udoka received criticism for his transgression from many people who questioned how he could have deceived the actress, who was a well-known celebrity and one of the most attractive actresses of her time.

“Sending Nia Long nothing but love.”

We won’t allow a guy who failed to appreciate the richness of her presence to diminish all of her beauty and magnificence.

We really need a Nia Long national holiday, according to Congressman Jamaal Bowmann of New York.

Van Lathan, the director, said, “Nia Long has a 100% approval rating with Black America and Ime Udoka is going to realise that.”

Nia Long being cheated on? Because there is NO WAY otherwise, the end of the world must be near, said producer Nina Parker.

In an interview with the media on Friday, Celtics club president Brad Stevens and Grousbeck sharply criticised the now-suspended Udoka, saying that only he was “facing punishment or censure.”

Grousbeck claims that the team’s players are “extremely worried” about the predicament.

We believe that our culture is quite strong, he said. We’re quite happy with it. But this has made it shaky. I don’t believe there is a bigger problem than what we’ve spent months researching.

Smith had a problem with Grousbeck’s response and made it obvious on First Take.

There is now no reason on earth, in his opinion, why Ime Udoka is still the head coach of the Boston Celtics, even if he is banned, he said. “I’m not going to repeat what was said, but it was really very worrisome, incredibly one-sided,” he added.

For the 2022–23 season, Joe Mazulla, a 34-year-old who assisted the Celtics last year, will serve as the acting head coach.