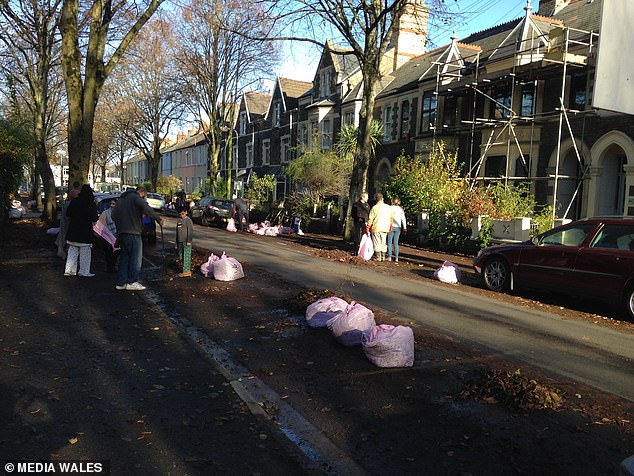 After requesting volunteers to assist in sweeping up autumn leaves, a municipality in Wales faced reaction, and not everyone was pleased.

To celebrate the arrival of fall, Cardiff Council promoted its “Big Sweep” program, which has been encouraging people to pick up leaves on their street to keep it clean for the last seven years.

Residents were requested to pitch in by using bags provided by the municipality to sweep up the fallen leaves on their own street since the collection crews were unable to “be everywhere at once” when they cleared up leaf fall during the busy season.

Neighbors are urged to participate individually and in groups, and the council will collect the bags once they are filled.

Although the “Big Sweep” has been successful in uniting neighborhoods and keeping streets clean, other locals have criticized the program as a joke and suggested that the task should only be handled by the council.

The council encouraged people to participate in a neighborhood “Big Sweep” if they lived someplace with trees on their street in a post on its Facebook page.

“You may pick up the leaves on your street using the bags we’ll offer.” You may either volunteer on your own for the community or you can organize a leaf clean-up with your neighbors.

While many people supported the plan, others immediately voiced their disapproval.

Several commenters on the article made the argument that people shouldn’t be required to do “council labor” while paying council tax, while others criticized the council for deciding to conduct fewer kerbside garden trash collections throughout the fall and winter.

They want me to clear up the leaves, not on my watch, and they pay me exactly £125 a month.

Another said, “How much do you pay us per hour to provide the services we pay you to perform via our yearly council tax payments?”

Others referred to the request for volunteers as “unbelievable” and “a joke,” while a third asked if locals who assist you get a council tax refund.

Many people questioned the timing of the promotion of the program given that the same council had recently announced that kerbside garden trash collections will be cut to a monthly service before being completely discontinued in December, January, and February.

Others have demanded that collections be made more often, even though the council has supported this choice given that the quantity of garden trash collected during the winter months greatly decreases.

If you can offer and pick up full bags, why can’t you keep collecting green bins, one individual questioned? The council’s current style of thinking is absurd and makes no sense. Perform the work you’re paid to do, please!

Cardiff as a city is becoming more filthy. In the city, I’ve overheard several individuals complain about how filthy the streets are. Next, you’ll be requesting the store employees to gather trash.

Another questioned: “Why not increase rather than decrease the pickup of green bins at this time?” Considering that we have sizable containers for collecting this biomatter, it makes little sense to utilize additional plastic.

But you’ve decreased the frequency of green bin collections, a third witness said. Residents are far more inclined to clean the area around their home or road if it’s handy and leaves can be dumped directly into their green bins, cutting off the need for collecting special bags—unfortunately, ours are already full.

One of the compliments said that “my parents and grandparents used to constantly tidy in front of the home and kerbs” was among the remarks. Myself and my children, I hope, have received this.

It’s called “taking pride in your neighborhood,” another chimed in to support them. Like, instead of sitting back and saying, “Not my job,” you know, like your great grandmothers used to sweep and wash the sidewalks in front of your home.

Although it’s obvious that some people still do it on the street next to us, most people nowadays seem to have lost any sense of dignity.

I understand everyone’s complaints, but I must admit that we’ve participated in this for the last three years, and it appears to be the highlight of our eight-year-year. old’s

The council should take care of it; it shouldn’t be up to the person. However, it’s a great communal activity, and we often also clean the roads and fronts of our neighbors.

According to statistics, the quantity of garden trash collected from homeowners decreases by 80% over the winter. Instead, collection teams concentrate on collecting food waste, black bag garbage, and recycling, which dramatically rises as people spend more time at home in the run-up to Christmas.

They stated that the Big Sweep initiative, which has gained popularity in previous years, is entirely volunteer and seeks to “engender goodwill and two-way respect between citizens and council workers.”

‘The concept of the “Big Sweep” is to reach out to community organizations and people who are established around the city and who volunteer to help out via the Love Where You Live campaign – Love Where You Live, Keep Cardiff Tidy,’ according to the council spokeswoman.

The “Big Sweep” has been taking place in Riverside and Pontcanna for seven years, and it has subsequently extended to neighboring communities. Residents and the authorities are collaborating to clear the copious quantity of leaves that accumulate on certain streets.

“The program was created by the community and is very well-liked, with hundreds of locals participating.” Between citizens and municipal personnel, the sweeps foster goodwill and mutual respect.

“The larger Love Where You Live campaign was created to unite neighborhoods so that locals may be proud of the places they call home. It is acknowledged that some individuals will always be critical of voluntary community programs like this, but this is evident in some of the remarks that have been posted on social media in regard to the “Big Sweep.”

The council will provide the bags and then collect them as part of the “Big Sweep.” If you are interested in participating and are not currently a member of a volunteer organisation, please contact us at lovewhereyoulive@cardiff.gov.uk or by phone at 029 2071 7564.