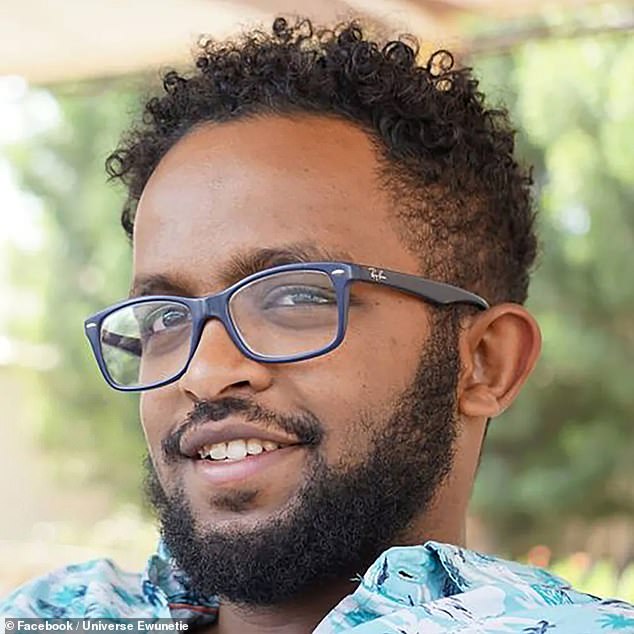 The brother of a 20-year-old Princeton student whose body was discovered near the school’s tennis courts deems the position of her body to be’suspicious.’

Misrach Ewunetie, who went missing on October 14, was the sister of Universe Ewunetie, who earlier criticized authorities for keeping the family “in the dark” during the hunt.

Casey DeBlasio, a spokesperson for the Mercer County Prosecutor’s Office, stated that Misrach’s things were recovered alongside her body on the school’s campus on October 20.

Universe informed The Sun that the odd nature of the spot where Misrach was discovered is supported by the fact that trees had to be torn down for her removal.

“Everyone believes it’s over, but they issued that statement before doing an autopsy and without informing us.”

The autopsy was completed on October 21, but the cause of death will not be determined for “weeks,” according to DeBlasio, because additional tests must be undertaken.

After the university’s Department of Public Safety concluded that there was ‘no evidence of criminal involvement,’ Universe still has worries regarding his sister’s death.

‘She was telling me about her plans to start a savings account, her upcoming interview, the items she was purchasing and shipping to Cleveland, and her involvement with her student club organization,’ he said.

On October 13, Misrach was reportedly helping at one of Princeton’s 11 elite dining clubs, the Terrace Club.

Terrace Club is one of the non-exclusive clubs at Princeton, requiring members to only sign up for membership, and is unaffiliated with the university. The clubs are for the school’s upperclassmen to have lunch and engage in various activities.

She was a club member on “duty,” performing housekeeping duties during a live musical performance.

According to the club’s Instagram page, Raavi and Jackie Marchal were performing that night.

Misrach, along with other members on duty, left for the night once the club had closed and all obligations had been completed.

According to her brother, she returned to her hostel at 3 a.m. after the event. ‘ Her roommates reported seeing her at 3 a.m. Then, a second roommate of hers stated that she had not seen her after 4 a.m., and since then, no one has seen her.

They did not search for her since they assumed she had returned home.

Her body was discovered 1.5 miles from her home, near State Road by the university’s Recreation Department, which houses a walking trail, community pool, and sports facilities.

The disappearance of Ewunetie prompted a multi-day search that included the deployment of drones, helicopters, and watercraft surrounding the Ivy League campus.

Due to a lack of search warrants, campus police visited Ewunetie’s housing estate three times and conducted a canine search, but were unable to enter any residences.

It was previously disclosed that her smartphone was last used early on Sunday morning seven miles from campus.

As a result of missing so much in-person education due to the pandemic, school was challenging for Universe and many others.

The first year they were not on college due to the epidemic was terrible for her and many others, as recounted by Universe. In 2008, the family emigrated from Ethiopia.

This year, though, she has been attempting to join the Terrace Club as a means of establishing new friends.

Ewunetie graduated from the Minds Matter Cleveland program in 2020, which assists low-income, high-achieving kids. The executive director of the NGO, Sara Elagad, told CNN that her former student’s absence was highly uncharacteristic.

Elagad remarked, ‘It is not at all in character for her to purposefully disappear or lose contact with her family.’ We are assisting her family as they assist law enforcement in locating her safely.

The organization also uploaded a video on Twitter stating that Ewunetie had worked with them for ‘three years’ in order to attend her ‘dream college.’

The organization aids low-income, high-achieving students in their pursuit of higher education.

Elagad stated in the video, “She [was] an exceptional student.”

Charles Slife stated in the video, “She was ecstatic to get into Princeton.”

They later reported that the loss of the student “devastated” them.

Planet Princeton reports that Ewunetie was the valedictorian of her high school and was majoring in sociology with a minor in computer science at Princeton.

Her family members, who have resided in Ohio since 2008 but are originally from Ethiopia, say her disappearance is all the more troubling because she missed a citizenship application meeting the following day.

Universe stated, “She is the jewel of the household, (my parents’) only daughter and the youngest.” She is highly cherished.