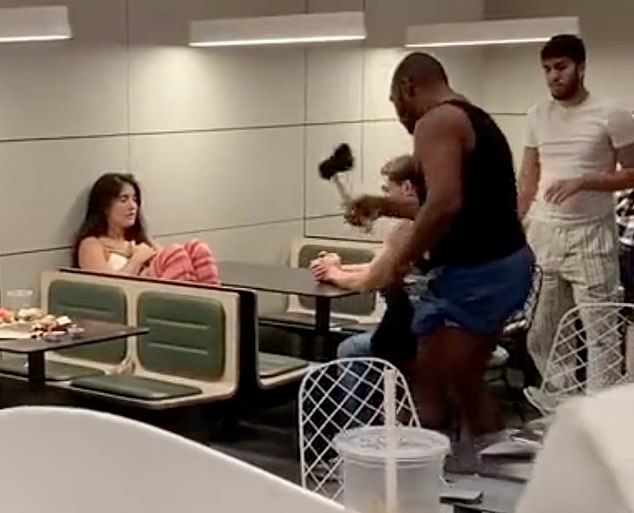 The guy who used an axe to destroy a Manhattan McDonald’s and was later taken into custody without posting bail was apprehended once again for allegedly spray-painting graffiti and stealing a bicycle in Brooklyn.

According to the New York Post, when police spotted Michael Palacios, 31, of the Bronx, spray-painting graffiti on Sunday, he attempted to flee before being apprehended.

In an effort to flee before being apprehended by police, Palacios, who made headlines last month for his axe-wielding rampage in Manhattan, is accused of stealing a $3,500 bike from in front of a nearby coffee shop on 69 Second Avenue.

Palacios was once again freed without bond despite his repeated crimes in the city, despite the fact that the Big Apple continues to struggle with rising crime rates.

On September 16, after apparently being rejected by a young lady, Palacios was seen on camera threatening customers at the McDonald’s on Delancey Street.

Video of the subsequent hysteria shows Palacios threatening customers while swinging the axe, shattering windows, and terrifying witnesses. This was the result of a verbal argument that swiftly escalated into physical altercation.

According to Ruben G, an Uber Eats delivery person who saw the altercation, “so essentially he got into an argument with a female, and then the girl rejected him,” The New York Post on Sunday.

Ruben said, “She didn’t want to speak to him,” adding that the woman’s lack of interest had no effect on the guy.

The delivery guy said, “He continued going at her.” “At that point, the males she was with intervened.”

In the incident that Ruben mentioned, several young males are seen assaulting the suspect and shoving him up against a trash can. This is about when the well publicized film starts.

The shockingly gruesome video shows the attackers punching Palacios, who seems undeterred by the onslaught of punches.

A grinning Palacios first seems to take the blows in a display of strength and dominance, but finally loses his cool and pulls the axe from a bag he had nearby.

The other patrons began to apologize at this time, but Palacios, furious, continues to go forward, swinging the weapon at them and threatening more guests.

They got into a fight. Ruben remembered that the suspect had requested the young woman’s phone number, and that everything had culminated at that point.

In the video of the event, a young lady who seemed like she belonged to the customers’ group tried to break up the growing argument, but it persisted until police were called.

Palacios is shown swinging the axe at numerous of the restaurants’ tables, which result in them being broken into countless pieces.

He then corners one of his earlier assailants, who begins to beg for mercy while hiding behind a wall. He also swings the axe into a glass panel, shattering it instantly on contact.

Then, while threatening other terrified diners and yelling, “Don’t be frightened of me, be afraid of him!” at one point, he smacks one of the guys he was battling off of his chair.

Following the rampage, Palacios rode away from the scene on his bike until being apprehended by police on adjacent Ludlow Street, according to the driver. In part because of the widely disseminated video of the event, police were able to find him.

Charges against Palacios, who was seen walking about the city hours after his detention, include threatening, criminal mischief, and criminal possession of a firearm.

In relation to his most recent offense, Palacios was accused with grand larceny, two counts of criminal mischief, possession of stolen goods, creating graffiti, and possession of graffiti tools.

For both arrests, Palacio was freed without posting bond, a trend indicative of the high crime rate plaguing New York City.

Police in the Big Apple recorded 378 murders, which is a decrease of 13.5% from the previous year, while total crime has increased by 32.68%.