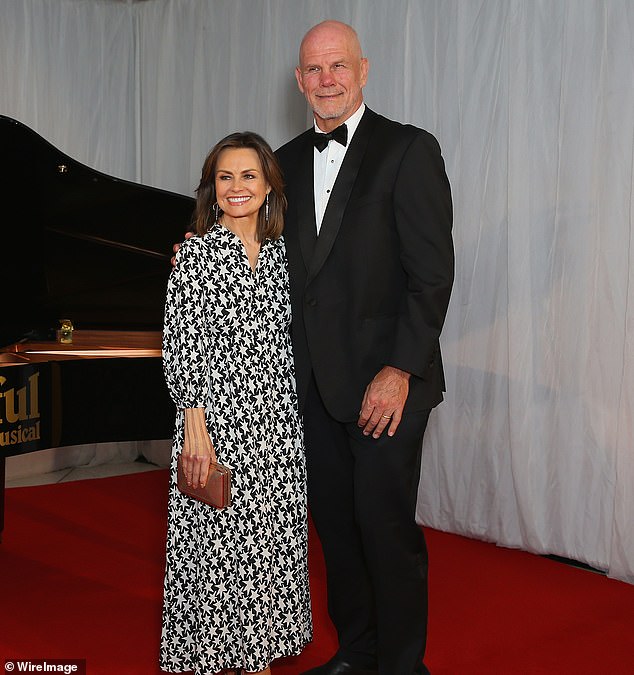 Brittany Higgins has been questioned in court on a $325,000 book deal made by Peter FitzSimons, the husband of Lisa Wilkinson.

Before being formally examined by police over her alleged rape, the former Liberal worker acknowledged to a jury that she had prepared chapters of a book about her life.

In March 2019, the 27-year-old claimed that her former colleague Bruce Lehrmann sexually attacked her in Parliament House following a night of drinking.

Mr. Lehrmann is on trial in the Supreme Court of the ACT after pleading not guilty to the charge of sexual contact without consent.

Mr. Whybrow also addressed Ms. Higgins with a text message she sent to her boyfriend, David Sharaz, stating, “I’m wiping up my phone before the police arrive.”

Brittany Higgins and her husband David Sharaz arrive at the ACT Supreme Court in Canberra.

The defense attorney, Steven Whybrow, questioned her on a book contract and the texts she sent to Ms. Wilkinson and Mr. FitzSimons.

In a highly charged moment in court, Mr. Whybrow informed Ms. Higgins that she had not met with police until February 24, 2021.

It was the situation that you had already begun planning and outlining chapters for a book you were considering publishing.

Ms. Higgins responded, “There was no possibility that [the book] would be a concrete item.”

I felt compelled to record my experience.

It was a bizarre moment in which everything came full circle. When I first began writing, there was no market.

She told the court, “[Mr. FitzSimons] said he would act as my agent, and I replied “fine,” and within a day he returned with offers.”

Mr. Whybrow asserted to Ms. Higgins that she inquired about a potential book with Mr. FitzSimons, to which the claimed victim responded, “I actually didn’t inquire; he approached me.”

He stated, “I know people; I’ll ask them for you.”

He then referenced a text message received by Ms. Higgins to Ms. Wilkinson and FitzSimons that read, “I am blown away.”

“Absolutely, I can do this… I have been outlining the chapters for the past month or so.

Ms. Higgins concurred with Mr. Whybrow that she began outlining the book’s chapters before making a formal statement to police.

Mr. Whybrow questioned Ms. Higgins earlier in the day as to whether she removed messages and audio from her phone before handing it over to the police.

In court, he asserted, “You transmitted a lot of files to Mr. Sharaz, and when asked what they were, you replied, “I’m clearing out my phone before the police arrive””

She was also questioned about a text message she sent to her lover, David Sharaz, which stated, “I’m wiping up my phone before the police arrive.”

Ms. Higgins told the court that she provided her partner recordings out of fear that they would cease to exist. These were stored on a USB drive.

I handed over my phone along with a USB stick with the audio.

Mr. Whybrow informed Ms. Higgins that, despite being asked numerous times in 2021, she consistently refused to hand over her phone to the police.

He told the court that she was scheduled to hand over her phone to police on March 21, 2021, but she missed the date due to a “important legal problem… a defamation incident with Ms Reynolds.”

Ms. Higgins said that, despite being requested, she did not hand over her phone for several weeks and felt tearful while explaining why.

“I was terrified when I learned [during the week of May 21] that any politically sensitive topics within the purview of the police would be referred to the home affairs minister the moment I reengaged with police.”

She stated that former minister of home affairs Peter Dutton had knowledge of her allegations prior to her official police statement.

She told the court, “I was quite afraid.”

I sought legal counsel to learn my rights because I was afraid.

On Monday, the cross-examination of Ms. Higgins will continue. The trial will likely last between four and six weeks.

»Brittany Higgins’ text to Lisa Wilkinson and Peter FitzSimons about a $325,000 ‘book deal’ is questioned«