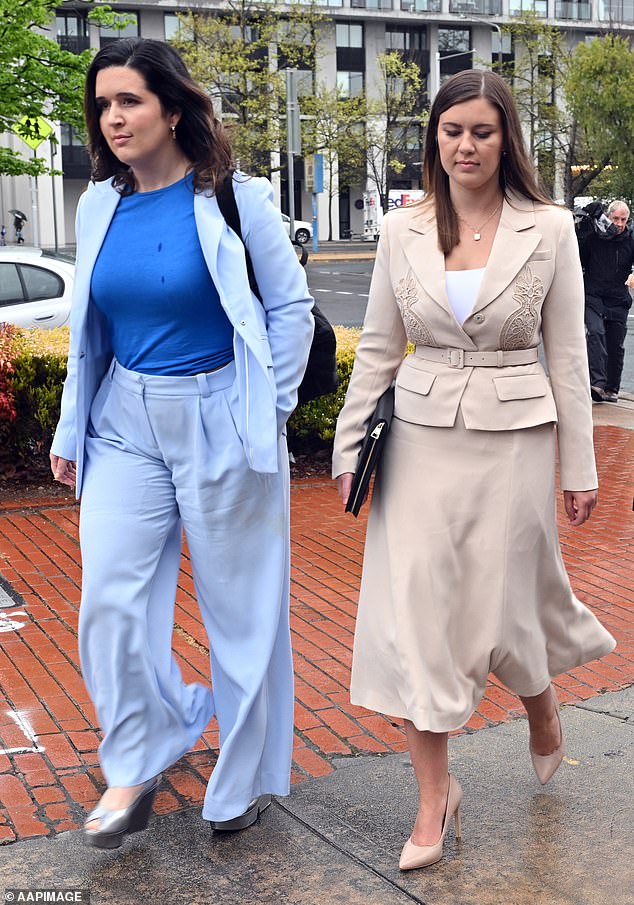 Brittany Higgins is heard in a police interview giving officers her account of what happened after she was reportedly sexually assaulted in a parliamentary office by another staff member, Bruce Lehrmann.

After Lehrmann allegedly sexually assaulted her one Friday night in March 2019, Ms. Higgins stated in a portion of the interview that was shown before the ACT Supreme Court on Wednesday that she had a “weird moment of eye contact” with him.

In the police interrogation, Ms. Higgins said, “At that point, I didn’t say anything to him anymore.”

Lehrmann has entered a not guilty plea to one count of engaging in sexual activity without permission; Ms. Higgins was the first witness to testify on Wednesday and watched as the video was shown.

Ms. Higgins said during the interview that a female security guard had awakened her up the next morning and inquired as to her well-being.

Despite having her clothing bunched around her waist, the young lady told the court she was “fine.”

After vomiting in the former minister’s restroom, according to the testimony given in court, Ms. Higgins entered a tiny, windowless room next to Ms. Reynolds’ former office, where she discovered a box of Roses chocolates and ate it while sobbing.

I gathered myself since I was looking very unkempt. In the police interrogation, she said, “I took one of the minister’s coats to hide my cocktail dress.”

Ms. Higgins informed police that she went to work the following Monday and ran into Mr. Lehrmann.

The court heard that she claimed they did not discuss the alleged occurrence on the night in question; instead, he brought her coffee.

“I was overcompensating to make things seem normal,” I said. We didn’t talk about it. We avoided discussing it. He didn’t seem repulsed or embarrassed.

It “felt like something he didn’t want to discuss.”

She told investigators, “I didn’t say no to coming to parliament because it seemed like a secure area for me.”

“I didn’t have all my equipment with me, but at the time it didn’t seem hazardous or dangerous,” the speaker said.

After the two of them entered Senator Reynolds’ office, according to Ms. Higgins, she allegedly slept off on a sofa and woke up to Lehrmann having sex with her.

On Wednesday, she will be questioned by Steven Whybrow, Lehrmann’s defense attorney, and prosecutor Shane Drumgold SC.

Mr. Drumgold warned that the trial, which is anticipated to run four to six weeks, might summon more than 50 witnesses to testify.

Liberal senators Linda Reynolds and Michaelia Cash, former Liberal MP Steven Ciobo, and other members of the legislative and political staff are among the witnesses.

Whybrow informed the jury. Lehrmann vehemently denied having sex with Ms. Higgins, and her claims had not been verified or tested.

‘This is going to be a long case. Ms Higgins has said a lot of things about a lot of people,’ Mr Whybrow said on Tuesday.