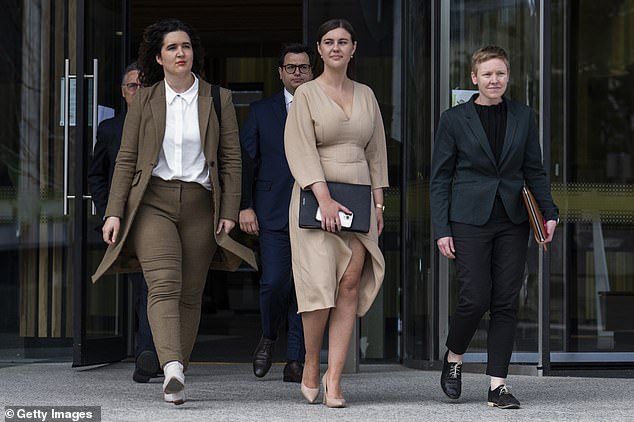 According to testimony given in court, Brittany Higgins expressed concern that her rape charges would “define her” in a phone conversation with a Liberal MP.

After a wild night out, Bruce Lehrmann is accused of sexually assaulting the former Liberal employee in Linda Reynolds’ parliamentary office in March 2019.

The ACT Supreme Court is hearing the case of Mr. Lehrmann, who at the time shared an office with Ms. Higgins and has pleaded not guilty.

Before moving to Canberra to work in Parliament House, Ms. Higgins volunteered at the Gold Coast office of MP Samuel O’Connor, the court heard on Monday.

Ms. Higgins hinted to the alleged event in text messages, according to Mr. O’Connor, the Liberal representative for the state seat of Bonney, but he didn’t learn about it until a phone conversation in April 2019.

He said in court at one point that Ms. Higgins called the alleged encounter a “very f***ed up thing that occurred.”

Mr. O’Connor said in court that Ms. Higgins claimed to have been out drinking with other employees during the phone conversation.

At night’s conclusion, she was given a ride home by a coworker from the workplace. He responded, “She told me it was Bruce.

Ms. Higgins told him that she was “raped in the minister’s office,” according to Mr. O’Connor, who noted that she was “hazy on the specifics” but was “upset.”

He recalled that she had expressed concern that this would define her.

She would be recognized for both doing that and doing her job poorly.

He informed the court that Ms. Higgins had asked him to inform her if there were any rumors against her.

She asked him to inform her if he had heard anything about her.

Before she began volunteering in his office, Ms. Higgins resided across the street from him on the Gold Coast, according to Mr. O’Connor, who testified in court.

Before moving to Canberra in late 2018 to work in Liberal frontbencher Steven Ciobo’s office, he said in court that Ms. Higgins was “eager.”

He said, “This was her dream.” “This was what she enjoyed doing,” we are told.

She became quite interested in Canberra and the intensive environment that it offers. She seemed quite upbeat.

More than a year before she publicly accused Lehrmann of raping her that night, the court heard that Ms. Higgins was “embarrassed” that a story may surface about her slipping into Parliament with him.

The former employee’s employer, Senator Michaelia Cash, said in court that a media query on Ms. Higgins was made to the office of colleague minister Linda Reynolds in October 2019.

Ms. Higgins had worked for both lawmakers that year, initially as an assistant media advisor for Ms. Reynolds, minister of the defense industry, before shifting to Ms. Cash’s office later that year.

Ms Cash said the court that Ms Higgins was worried the March 2019 security breach would become public because a Canberra Times writer had contacted the media about it.

She felt humiliated since it included her and a security problem, according to Ms. Cash.

After drinking, she and another employee went back to the workplace. They could have been under the influence.

“Ms. Higgins slept out on the sofa, and I think security discovered her the next day.”

Daniel Try, the head of staff for Ms. Cash, said before the court that Ms. Reynolds’ office informed him that there had been a media inquiry regarding Ms. Higgins and that they would send someone to speak to her.

The previous minister of defense, according to Mr. Try, did not go into specifics but did state that “it was not Brittany’s responsibility.”

He led Ms. Higgins into a conference room, where she was joined by a representative of Ms. Reynolds’ office.

During that meeting, Mr. Try left the room, but upon his return, he saw Ms. Higgins distraught.

Then Mr. Try invited Ms. Higgins to join Ms. Cash in a meeting. Ms. Higgins didn’t go into specifics, but she did say that the incident included a security problem that was resolved at the time.

Brittany was very distraught, so Mr. Try remarked, “I didn’t believe it was right to ask her for specifics.”