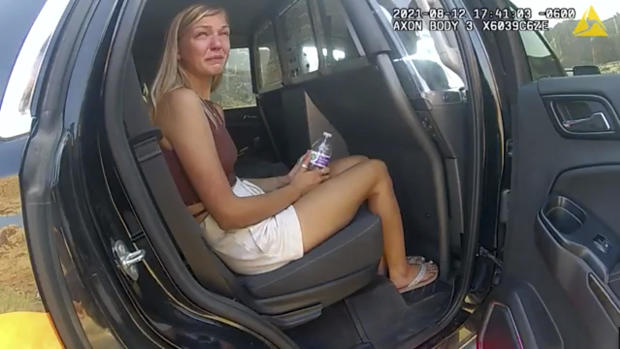 Police in Moab, Utah are being sued by Gabby Petito’s family for alleged carelessness that contributed to the 22-year-death old’s last year. They are seeking damages of $50 million.

The Moab Police Department, three of its officers—”Palmer,” “Pratt,” and Daniel Robbins—as well as ten other unnamed defendants are named in the lawsuit, which was brought by the attorneys for Joseph and Tara Petito and Nichole and Jim Schmidt.

The lawsuit accuses the defendants of “negligent failure” in their investigation into an alleged assault between Petito and her fiancé, Brian Laundrie, several weeks before her death.

Additionally, they allege that each defendant is responsible for Petito’s “wrongful death,” claiming that this was done via their negligence or wrongdoing.

Just over a week after her family reported her missing, Petito’s corpse was discovered on September 19, 2021, next to a lonely campsite in the Grand Teton National Forest.

She had travelled cross-country with Laundrie, who was also discovered dead in a Florida reserve after running away weeks later.

Near his bones, authorities discovered a journal in which he admitted to murdering his fiancée.

After an altercation with Laundrie that included both verbal and physical violence in August 2021, Petito met with a number of Moab Police Department officers before she passed away.

According to lawyers retained by Petito’s parents, the police “failed in their duty to protect Gabby.”

The complaint claims that Laundrie assaulted and slapped Petito while pursuing her along a sidewalk in Moab, as described by a 911 caller.

Another observer claimed to have seen the two “talking forcefully” and that “something looked weird”; they said it seemed Laundrie had taken her phone, gotten into their van, and attempted to flee before she climbed over him and entered the vehicle.

The complaint claimed that an officer named Daniel Robbins discovered the couple’s vehicle racing down a highway, veering over the centre line, and colliding with a curb.

After stopping outside of Arches National Park, Robbins divided the two and spoke with them.

Later, Robbins was joined by two park rangers and his boss, Officer Pratt, who was named in the complaint.

The complaint claims that while body cam images from the cops’ interviews with the two were previously made public, they don’t accurately depict what really transpired.

According to rumours, a never-before-seen photograph of Petito from that day depicts blood on her face and around her left eye, as well as evidence that Laundrie grabbed her by the lips and nose.

The images that were made public are also a part of the complaint, and one of them allegedly depicts a mark on her skin. When questioned, Petito admitted that Laundrie had grabbed her.

According to the complaint, Petito attempted to claim responsibility for the event and asked to remain with Laundrie during interrogation, displaying “the usual signs of an abused relationship.”

Laundrie responded by telling police that Petito attempted to slap him before being shoved by him.

He claimed at one point that he attempted to use Petito’s phone since he didn’t have his own, but he subsequently displayed his own phone to authorities.

Additionally, Laundrie said that when in Moab, he and Petito decided to go on separate walks.

This contradicts the accounts of the witnesses who claimed that Laundrie attempted to flee in the van.

The cops are charged in the case with neglecting to ask Laundrie about his contradictions. Instead, they discovered Laundrie to be the victim and Petito to be the “principal aggressor.”

Pratt then informed the two that he would have to place Petitio under arrest, something neither of them desired.

Pratt called Assistant Chief Palmer, his boss, who instructed him to “seriously examine the assault legislation” and make a decision.

According to the complaint, Pratt barely skimmed it and misunderstood the law; he thought that assault was only illegal if the perpetrator “intended to inflict physical harm.”

Then, Pratt instructed his subordinate, Robbins, to make a choice. Robbins opted not to press charges and instead sent the case to the city attorney because he didn’t trust Petito.

According to the complaint, Pratt forewarned Robbins that if the couple disapproved of his choice, “you could hear about it in a very nasty manner.”

The decision was rejected by a park ranger as well, who said that she would rather “be dinged for a choice I made than a decision I didn’t make.”

The complaint said that Pratt continued following the ranger’s remark, “particularly if they believe you were absolutely irresponsible in your choice.” Pratt then said that he agreed with Robbins’ choice.

Then, while Robbins was submitting a citation, Pratt inquired as to whether he would want to attend to a newly received call. Robbins remained but said that he was unsure of what to do.

Robbins decided to divide Laundrie and Petito for the evening after speaking with Pratt.

According to the complaint, Pratt allegedly added that it wouldn’t be their duty if the pair eventually made their way back to one another.

The cops’ reaction was the subject of an independent inquiry by Petito’s family, which revealed that “the officers made multiple errors and could not rule out that Gabby’s murder would have been avoided if the officers had handled the situation appropriately.”

The Petito family lawyers also supplied media articles alleging problems inside the Moab Police Department. In one, multiple cops were charged with working while drinking with children.

Any of the officials identified in the case are not mentioned in any of the articles.

James McConkie, one of the family lawyers, said in a statement that although if the whole evidence has not yet been made public, when it is, it “will plainly prove that if the cops had been properly educated and obeyed the law, Gabby would be still be alive today.”

Failure to abide by the law may have fatal effects, as it did in this instance.

Injuries totaling $50 million are sought by the family.

Laundrie’s parents became the subject of a lawsuit from Petito’s family as well since they are accused of knowing what happened to their daughter and where her corpse was while she was still missing. They’re claiming $30 000 in losses.

In their response to the complaint, Christopher and Roberta Laundrie asked for the case to be dismissed and labelled the allegations as “baseless” and “frivolous.”