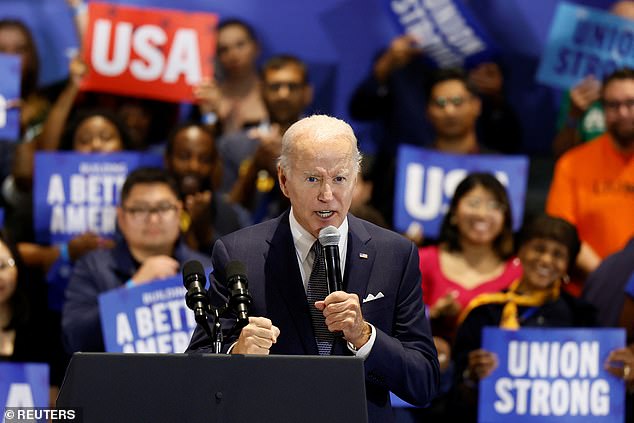 In his address against MAGA Republicans, President Joe Biden criticized House GOP Leader Kevin McCarthy’s ‘thin’ Commitment to America and mocked him for declaring ‘with a straight face’ that he will’restore faith’ in American elections.

Biden stood before a throng at the headquarters of the National Education Association in Washington, D.C., on Friday afternoon for a Democratic National Committee political event, when he gave much attention to McCarthy and House Republicans’ previous appearance in Pennsylvania.

Biden commented, “After fighting and blocking everything we tried to do to stop progress over the past two years, House Minority Leader Kevin McCarthy went to Pennsylvania and revealed his “Commitment to America.” Republicans, if they win control of Congress, would follow a brief list of policy objectives with few specifics, according to the Republican candidate.

Biden said, “Over the course of nearly an hour, here are a few of the things we did not hear.” We did not hear him discuss the freedom of choice. Medicare was not mentioned by him. He made no mention of Social Security.

McCarthy did discuss maintaining Constitutional freedom, according to Biden.

“That sounds fantastic. We are all in favor of doing so,’ the president stated. But consider what they have actually accomplished.

Biden noted that “MAGA Republicans just cheered and embraced the first Supreme Court decision in our entire history that not only failed to preserve a constitutional freedom, but actually took away a fundamental right that the same court had granted to so many Americans – the constitutional right to choose.”

Republicans of all shades have welcomed the Dobbs ruling, which reversed Roe v. Wade and returned abortion legislation to the states.

After GOP Sen. Lindsey Graham submitted a nationwide 15-week abortion ban bill, Republicans are debating whether to try to outlaw abortion at the federal level or keep it at the state level.

Biden said of the Graham abortion prohibition measure, “If they win Congress, I would veto it.”

McCarthy’s Commitment to America does reference defending the rights of the unborn, but McCarthy and other GOP politicians did not emphasize their views on abortion during their appearance in Monongahela.

McCarthy instead pledged that the first bill a House GOP majority would pass would be to’repeal 87,000 IRS agents’ – a number Republicans derived from a Treasury Department estimate of how many IRS employees could be hired using the $80 billion appropriation in the Inflation Reduction Act, in order to drum up opposition to the bill.

Biden said, “And finally, with a straight face, Kevin McCarthy asserts that MAGA Republicans will restore faith in our elections.” As my faith teaches, “Bless me, father, for I have sinned.” Restore? Restore confidence in our elections?’ the president asked with a chuckle.

He continued, “MAGA Republicans refused to recognize the outcome of the 2020 election.”

In recent days, both he and his Chief of Staff Ron Klain have forecast that the Democrats will retain control of the House and Senate.

Biden stated, “You see the MAGA Republican program being adopted by all these candidates in the primaries, and then once they’re out of the primaries, they fight like hell to get out from under it.”