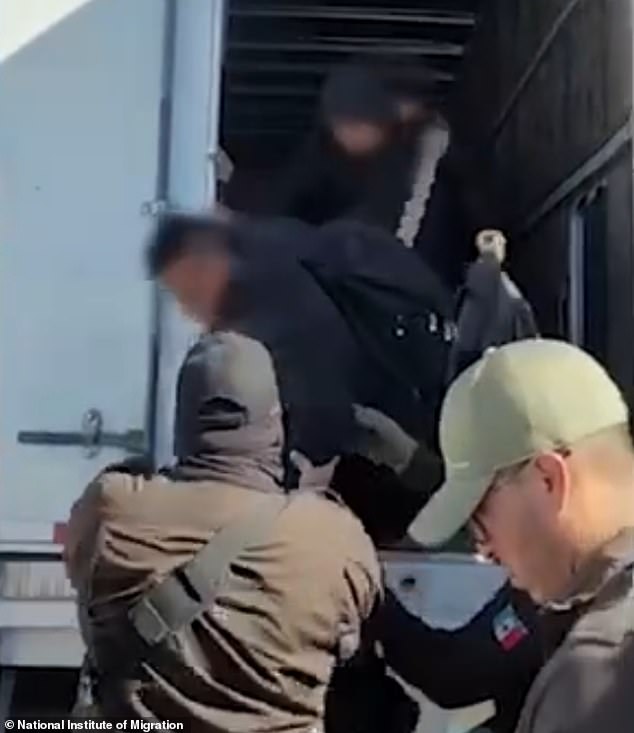 On its journey to the United States-Mexico border, a tractor-trailer carrying 110 Central and South American migrants was spotted.

On Thursday, security troops were sighted at a roadblock on Federal Highway 57 in Galeana, a hamlet in the northeastern Mexican state of Nuevo León.

After hearing voices from from the cargo container, immigration agents and local police, according to a statement from the National Institute of Migration, urged the driver to pull over near a toll to conduct the check.

Before being extracted, the agency released footage of refugees seated and standing together in the shipping container.

Thursday in Galeana, a city in the northeastern Mexican state of Nuevo León, security forces discovered 110 migrants hidden inside a tractor trailer that had stopped near a toll booth.

A tractor trailer with 96 Guatemalans, seven Ecuadorians, five Salvadorans, and two Hondurans was discovered on Thursday in Galeana, Mexico.

There were 96 Guatemalans, 7 Ecuadorians, 5 Salvadorans, and 2 Hondurans in the gang.

At least two children were going alone. They were placed in the care of Nuevo León’s National System for Integral Family Development.

The processing center of the state’s National Institute of Migration received 10 family units and 10 unaccompanied adults.

According to Mexico’s National Institute of Migration, two unaccompanied children were among the 110 migrants from Central and South America who were being trafficked to the United States-Mexico border.

According to the National Institute of Migration of Mexico, ten family units were among the 110 migrants discovered in a tractor trailer 4.5 hours from the northern United States border.

The most recent crackdown on the smuggling of migrants to the United States-Mexico border followed the release of a monthly report by U.S. Customs and Border Protection that revealed 2.4 million encounters with migrants who illegally crossed the border during fiscal year 2022, which runs from October 1, 2021 to September 30, 2022.

In fiscal year 2021, there were at least 1.73 million reported migrant interdictions.

According to data released in August by the Mexican Attorney General’s Office, criminal organizations brought at least 77,498 foreign migrants into the country between 2018 and 2022.

Since the start of President Andrés Manuel López Obrador’s administration on December 1, 2018, at least 2,286 individuals have been charged with migrant smuggling.