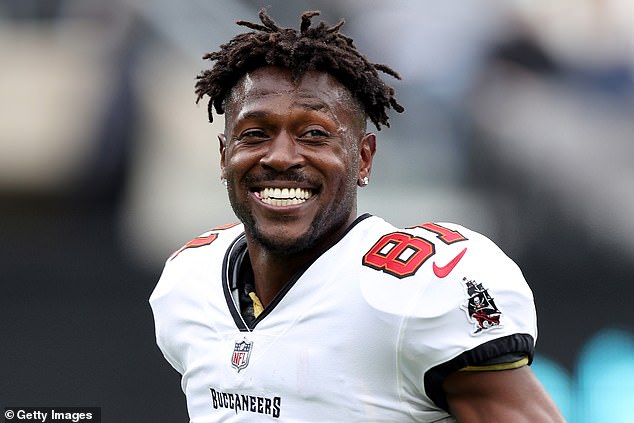 Antonio Brown is speaking out after being captured on film waving his penis and butt at a lady in a Dubai pool.

Brown, 34, tweeted after fresh evidence showed him putting his bare butt in a woman’s face at the Armani Hotel Dubai on May 14.

‘It’s strange to me that even after I retire there’s misinformation about me,’ he tweeted Saturday. The NFL is under fire for allowing concussed players to play. They’re testing on black males.

Seven-time Pro Bowler: ‘Every opportunity they have, they utilize me. On video, she steals my swim trunks. If positions were reversed, headlines would read “AB crazy night with naked female.” When it’s me, it’s a hate crime.’

Brown is alluding to Dolphins QB Tua Tagovailoa, who escaped a concussion on Sunday but was diagnosed with a brain injury on Thursday after a controversial medical assessment.

Tagovailoa and the team eventually claimed he had a back issue, not a head injury. His performance proved it, as he led an upset victory against the visiting Buffalo Bills. Tagovailoa and the Dolphins say doctors cleared him of concussion symptoms.

Vontaze Burfict gave Brown a concussion in 2015. After the hit and concussion, the receiver was arrested many times and accused of sexual assault.

As others encouraged Brown to keep thrusting his butt towards her, he reportedly grabbed a head scarf from another swimmer and attempted to wrap it over her.

“He’s handing her the long board,” said another guy.

Brown exposed his penis and said, “You want it?” Brown said the lady stole his trunks for a game and he hadn’t done anything to annoy her.

Two witnesses told the Post that Brown repeatedly flashed his privates at the lady and that hotel officials received many complaints.

A employee informed the newspaper that several guests complained about Brown’s exposed chest in the hotel.

Other allegations said Brown used marijuana in his room, which is illegal.

Brown’s stunning actions led him to leave the NFL and resort to rap music.

The embattled Pro Bowler startled NFL fans with a breakdown in January.

Brown ran onto the field naked during the Bucs’ game against the Jets at MetLife Stadium following a confrontation with coaches about his health.

Brown said ‘dangerous drugs’ given to him for an ankle injury caused his outburst.

Buccaneers authorities suspended him after he rejected mental health care.

Brown had long been surrounded by controversy before the event that led to him being cut and becoming a free agent.

Brown was banned for eight games for breaching the NFL’s personal conduct code.

Brown faced burglary and violence charges in Florida after being traded from the Oakland Raiders.

The battle between NFL earnings and player health isn’t new, but efforts to prevent TBIs are. David Michaels, an epidemiologist at George Washington University, said the disparity led to needless brain damage.

Michaels is an environmental and occupational health specialist who worked as OSHA assistant secretary under Barack Obama from 2009 to 2017. His 2020 book, The Triumph of Doubt, illustrates companies’ attempts to hide evidence about their products’ risks.

With flawed science and conflicted researchers, Michaels argues, the NFL delayed meaningful preventative action on chronic traumatic encephalopathy (CTE) until the early 2000s, a decade after first resolving to address head injuries and nearly a century after the neurodegenerative disease was discovered in 1928.

The NFL didn’t comment on Michaels’ 2020 interview with DailyMail.com. However, the league did dispute any parallels between itself and the tobacco business in a statement released to the New York Times in 2016: ‘The NFL is not the tobacco business; it has no link to the cigarette industry.’

Before the 1990s, the NFL didn’t require such measures. When journalists and fans saw a surge in concussions, the league took action, but only after then-commissioner Paul Tagliabue labeled it a ‘pack journalism problem’ and said concussions only happened ‘every three or four games.’

Tagliabue’s words caused a slight controversy at the time, causing him to form the Mild Traumatic Brain Injuries (MTBI) Committee, which was aimed at lowering the ‘injury risks in football.’

The committee didn’t do anything, despite using the euphemistic word’mild.’

Michaels: “The committee didn’t publish for eight years.” ‘Evidence collected, but when they published publications, they covered up the issue. They asked inquiries in the incorrect manner. To me, it appeared like they knew the answers they wanted to get before they ever started a research.’

Michaels noted that ‘clear conflicts of interests’ occurred when the NFL’s MTBI committee published 13 publications in ‘Neurosurgery’ between 2003 and 2006.

In fact, over a dozen of the MBTI members had links to league teams. Michael L. J. Apuzzo, a neurosurgery editor and Giants medical consultant.

The NFL recognized that ‘clubs weren’t compelled to provide statistics, and not every club did.’

The NFL conceded that details might have been clearer, but denied any intent to ‘change or downplay concussion rates.’

Bill Barr, a former New York Jets neuropsychologist, stopped short of accusing the NFL of a cover-up but rejected the MBTI’s conclusions.

In 2016, he remarked, ‘You’re not practicing science; you’re putting out a concept.’

Michaels criticized a Pellman and Viano research that claimed’mild traumatic brain injuries in professional football are not significant ailments’ since so many players return within a week, frequently inside the same game.

The article stated concussed athletes might return to the game if they showed no residual symptoms.

The publication said athletes have to be asymptomatic, have normal clinical and neurological exams, and be approved by a team physician. There were no detrimental effects, which is contrary to published standards and the practice of most college and high school football team doctors.

CTE can only be diagnosed postmortem, hence no verified instances were anticipated.

In 2017, Boston University researchers detected CTE in 98% of former NFL players, 91% of college players, and 21% of high school players.

Families of athletes with obvious head injuries were more inclined to contribute to the BU brain bank, experts say.

The paper’s assertion that ‘no NFL player acquired CTE from repeated injuries’ hasn’t held up.

A research titled ‘Concussion in Professional Football: Brain Responses by Finite Element Analysis’ may have overreached the most.

Pellman and others hypothesized that NFL players could be impervious to concussions.

In high school and college, concussion-prone players may have been weeded out, according to a report published in Neurosurgery. These brain responses may indicate those of athletes most resistant to neural deformation following head trauma.

The MTBI committee was skeptical when neuropathologist Bennet Omalu found CTE in Mike Webster’s autopsy in 2002. When Omalu urged for more NFL CTE research in a 2005 Neurosurgery report, the MTBI committee demanded a retraction.

The NFL disputed a 2009 research that found former players are 19 times more likely to suffer dementia.

Miller admitted CTE and football in 2016 before congress.

It occurred amid other attempts to stifle unfavourable media coverage.

The 2015 Sony film Concussion, based on Omalu’s study, was changed under NFL pressure, according to the NYT and Deadspin.

Michaels: ‘The league has more power than a chemical corporation.’ They rule America’s eyeballs for many hours a week. If the NFL switched entertainment firms, it would hurt their profitability.’

In the 2000s, the NFL banned risky tackles and established a concussion protocol, threatening to punish non-compliant clubs.

Critics said the NFL’s benevolence had conditions attached, despite its unrestricted checkbook.

Michaels: ‘The NFL backed its own researchers.’ When the National Institute of Health selected independent NFL researchers, specifically the group at Boston University, as the principal beneficiaries of this money, the NFL complained and asked the NIH to bring in scientists with a conflict of interest.

The NFL’s unsuccessful attempt showed that it didn’t want independent scholars looking into the issue.

The NFL reported 187 concussions during preseason, practices, and games in February. While it is up from 172 the previous season, there were no exhibition games in 2020 due to the COVID-19 epidemic. Overall, concussions fell.

‘We’re satisfied with the concussion figures, but it’s not the complete story,’ Sills said. ‘We want to aggressively decrease and eliminate unnecessary head impact.’

Miller noticed that adding one regular-season game and reducing one preseason game did not change injury patterns.

Miller: “We missed it.” Last week’s injury rate wasn’t greater than prior weeks; there was a drop-off.

What’s the NFL’s problem with “race-bending”?

Two years after two former players sued the NFL over its $1 billion concussion settlement, hundreds of men whose medical exams were rescored to remove racial prejudice now qualify for compensation.

In the decade-long legal struggle over concussions, the freshly authorized compensation were a triumph for NFL families. The 2020 lawsuit revealed dementia tests were ‘race-normed,’ or altered since black persons had a lower cognitive baseline score. Last year’s settlement changes made the exams race-blind.

Nearly half of the 646 rescored black males qualified for dementia prizes. Sixty-one have early to moderate dementia, with average awards topping $600,000; nearly 250 have milder dementia and will get up to $35,000 in enhanced medical testing and treatment.

Ken Jenkins, a former Washington player, petitioned the federal judge overseeing the settlement to make the changes and urged the Justice Department’s Civil Rights Division to investigate. We’re focusing on compensating as many players as possible.

This first group had the best chance of success because they passed testing and would have qualified if white. Thousands of other Black former players may petition to be rescored or retested, but their claims might not be as strong based on past findings on dementia, validity and impairment testing. 70% of current players and 60% of retirees are Black.

The testing system altered results by race as a proxy for socioeconomic background for years before former Steelers Kevin Henry and Najeh Davenport sued the league. Neurologists utilize age, education, and race to diagnose dementia. But experts argue the method was never designed to be used to assess compensation in a court dispute.

Advocates believe that many former players don’t aware they may be rescored or retested, particularly if they have cognitive impairments and live alone.

‘Men who are homeless, folks who initially joined up but their cognitive function deteriorated, men who are divorced or lonely – we are going to go hunting for them,’ said Amy Lewis, Jenkins’ wife.

The pair, formerly critical of class counsel Chris Seeger for his approach to the situation, now work alongside him to spread the news.

Seeger, who negotiated the deal with the NFL for 20,000 former players, apologized for missing the racial prejudice. He pledged in a recent interview to ‘make sure the NFL pays every nickel they should.’

As reviewers handle dementia claims, audits and appeals have increased.

After retiring from the NFL, Pruitt became a teacher and principal in Florida. In 2010, the district urged him to resign. He couldn’t work. He stopped phoning his old buddies.

I don’t go out and I forget a lot. He said, “I repeat myself.” “I’m ashamed by everything.”

After the 2015 settlement was authorized, he and his wife met with attorneys who sold the proposal to retired players’ organizations.

Traci Pruitt, 42, said she was assured the procedure would be simple: see a doctor and acquire a qualifying diagnosis. We’re still getting the runaround six years later.

The couple’s twice-approved adoptions were reversed, once when their original doctor was removed from the program. Under the race-neutral scoring method, their lawyer thinks they’ll win on their third attempt. They wait.

A grant would assist Traci Pruitt, a home-based accountant, care for her husband. While I adore him, I lack his background and skills.

Seeger says the claims procedure is moving up after a sluggish start.