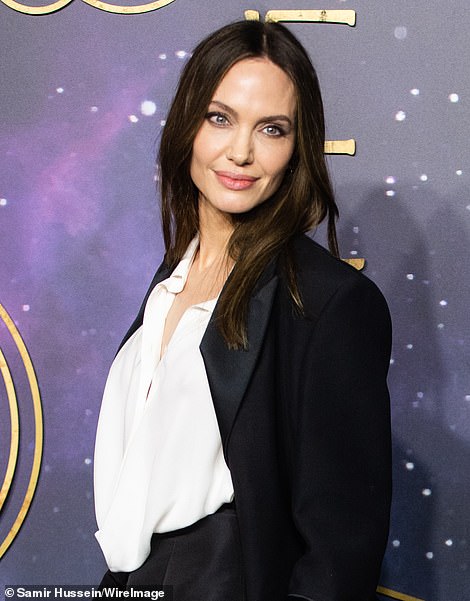 She claimed that her ex-husband had ‘choked’ one of their six children during a heated argument on a private jet, struck another in the face, and slammed the actress against a wall while grabbing her hair.

As a result of Pitt’s actions on the September 2016 journey from France to California, Jolie said she had injuries to her back and elbow in addition to the children weeping and being scared.

She filed for divorce five days after the trip, and in September 2021, she sold her share of the French vineyard she and Pitt co-owned. She filed a countersuit on Tuesday, accusing him of starting the extremely public mudslinging after he sued her over the sale.

According to Jolie’s attorneys, “She has gone to considerable measures to attempt to keep their children from revisiting the agony Pitt caused on the family that day.”

Pitt, however, “forced Jolie to publicly defend herself on these matters for the first time when he brought this lawsuit trying to reestablish control over Jolie’s financial life and compel her to rejoin her ex-husband as a frozen-out business partner.”

Jolie described in great detail the violent confrontation that she said caused their divorce and the ongoing disagreement over the winery that occurred in September 2016.

Jolie said that when they purchased the home, their respective agents spoke about writing a contract outlining how the property would be divided in the event of a breakup.

However, she said Pitt was against any such pact.

‘Early in the process I addressed the subject of a purchase / sell agreement between A & B but was advised by Brad that wasn’t essential for two reasonable persons to have such an arrangement,’ Pitt’s finance manager allegedly said in an email, according to Jolie’s attorneys.

The couple wed at the château in August 2014 after the notion was abandoned.

She said in the court records that she saw it as a house and investment for their family.

Pitt was accused by Jolie of building a fifth swimming pool on the estate at a cost of one million euros without consulting her about it.

But she said that at the time, she didn’t object.

When she and Pitt bought the chateau, they “initialized to do the same for their new house” since “Jolie had always had an active part in design for each property she had lived in (and those she has subsequently resided in),” according to her attorneys.

But Pitt sought creative control in line with his own preferences and goals.

Jolie would have liked a more collaborative approach, but she agreed to Pitt’s wish to assume charge of the project despite her occasional skepticism about, for instance, why the chateau required a fifth pool at a cost of one million euros or why the same staircase had to be redone four times.

If Jolie ever questioned such costs, Pitt justified them as essential to his vision for the château, according to the article.

The lawsuit records state that Pitt physically and emotionally abused Jolie and their children, who were then between the ages of 8 and 15, during the protracted, overnight journey.

After that flight, Jolie made the decision to file for divorce in order to protect her family’s welfare.

Before leaving for the airport, she said, Pitt “had a fight” with one of the kids, and when Jolie questioned him about it on the flight, he “accused her of being overly subservient to the children and viciously abused her.”

Jolie claims that 90 minutes later, Pitt went looking for her and chastised her for her behavior.

According to the court papers, “He took her into the restroom and started ranting at her.”

Jolie was shaken and grabbed by the head by Pitt, who then took hold of her shoulders and continued to shake her before pushing her into the bathroom wall.

Pitt then repeatedly struck the plane’s ceiling, which caused Jolie to come out of the restroom.

One of their kids said, “Are you fine, mommy?” as she left.

Pitt screamed back, “No, mommy’s not alright,” and then he began insulting Jolie.

Pitt allegedly “lunged” towards a youngster who spoke out in Jolie’s defense, and Jolie allegedly grabbed him to stop him.

Pitt hurled himself backward into the aircraft seats in an attempt to lift Jolie off his back, breaking Jolie’s elbow and back in the process.

The young people rushed in and valiantly attempted to shield one another.

Pitt strangled one of the kids and hit another one in the face before it was all done.

Some of the kids cried out for Pitt to stop. All of them were terrified. Many people were sobbing.

Jolie and the kids “sat quiet and silent” beneath blankets for the remainder of the trip in an effort to appease Pitt, according to reports.

No one ventured to use the restroom, according to the attorneys. Pitt would rant and curse at them from the rear of the aircraft.

He spilled beer on Jolie at one point and red wine and beer on the kids at another.

Jolie woke him up after arriving and informed him that they were staying at a hotel instead of returning to their house with the kids.

According to the court filings, “He screamed that nobody was getting off the aircraft and kept the family from deplaning for roughly 20 minutes.”

Pitt gave up when a kid stepped in and insisted they go.

Pitt, however, continued to violently assault one of their kids after they were outside the jet door.

He also seized Jolie by the head and shoulders, shaking her, and one of the kids pleaded with him not to injure her.

Although an inquiry was started, no charges were ever brought.

Jolie sued the FBI in April 2022 under the identity “Jane Doe” and demanded to know why the investigation had been abandoned seven months earlier.

Only in August of this year, when Rolling Stone magazine had gotten a copy of the FBI investigation, were her acts made public.

In her anonymous lawsuit, Jolie claimed that she had repeatedly asked the department for a copy of the case file in order to “better comprehend the FBI’s investigation” and to collect the data required for her children to receive medical attention and trauma treatment.

In her court papers, Jolie claims that their disagreement over the winery’s shared ownership grew.

“Pitt’s actions hardened as he moved to solidify his grip over the winery,” according to the article. “Disputes and problems in the linked divorce and custody processes ensued.”

She claims Pitt tried to force her out of the company and used the money earned from it to finance his own endeavors.

She said that Pitt’s unwillingness to share earnings alone gave him significant influence and control over Jolie in their on-going arguments.

By 2019, Jolie was feeling uneasy about continuing to work in the alcohol industry due to Pitt’s recognized alcohol consumption issue and its effects on their family.

Jolie came to the conclusion that she needed to sell her interest in Chateau Miraval after becoming “resigned that Pitt would not share control of the winery or distribute any profits, concerned about taking part in a business that was associated with such painful and traumatic memories for her and their children, and seeking financial independence.”

Pitt claims that Jolie sold her part in the international beverage business Stoli on her own, but Jolie countered on Tuesday that she had given Pitt the option to buy her out.

She said a $54.5 million agreement was made to sell her half to Pitt, but he withdrew when she filed abuse claims.

In the couple’s child custody dispute, Jolie filed a “Offer of Proof and Authority re Testimony Regarding Domestic Violence” under seal, which prevented the general public from seeing anything save the document’s title.

This filing reportedly infuriated Pitt, who then informed Jolie’s team on March 26, 2021 that he was “stepping back” from the Miraval deal in response to that submission.

She sold her stake to Stoli in September 2021, and the sale is currently awaiting final court approval.

Pitt now asserts that Jolie was not authorized to sell her interest in Chateau Miraval and is requesting the Court to unwind the sale, according to Jolie’s attorneys. Pitt had attempted to intimidate Jolie into signing a non-disparagement clause in exchange for her financial freedom and security.

“Once more, Pitt’s entire case against Jolie is based in large part on his alleged unwritten, unspoken agreement to always grant the other a consent or veto right over any sale of the other’s interest in the chateau and winery, regardless of the circumstances and regardless of whether they even remained a couple,” says the statement.

But Jolie learned about this purported consent right for the first time when she was made aware of news rumors that Pitt had filed a lawsuit against her and subsequently read Pitt’s complaint.

‘Jolie begs that the Court determine that no such agreement exists and that Jolie’s sale of Nouvel to Stoli’s subsidiary is complete,’ the court records state in their conclusion.

“With these declarations, Jolie can finally have what she thought she had when she sold Nouvel to Stoli in 2021: to move on from the winery and chateau, to have financial independence from her ex-husband, and to finally have some form of peace and closure to this deeply painful and traumatic chapter of her and their children’s lives,” the statement reads.

According to a person close to Pitt, if she doesn’t get her way, she keeps repeating, revising, and reimagining what occurred six years ago by adding absolutely false details. Her tale is always changing.

She had the opportunity to discuss this throughout the protracted custody battle, which ended with the court awarding Pitt 50/50 custody after careful observation and evaluation by medical professionals, therapists, and other specialists, the insider said.

Month after month, “she and her staff keep coming back to the same subject with fresh and misleading facts.”