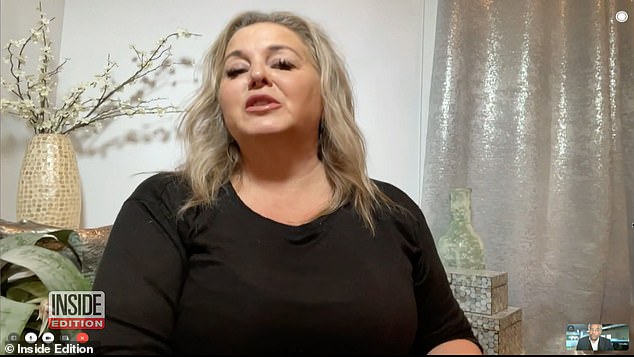 According to Alex Jones’ ex-wife, he is deserving of the almost $1 billion in damages that a jury in a Connecticut defamation case filed by the relatives of Sandy Hook Elementary School massacre victims ordered him to pay.

Recently, Kelly Jones spoke with INSIDE EDITION about the $965 million judgment obtained against her ex-husband of eight years.

The truth always surfaces, according to Kelly Jones. “You reap what you sow,” they say.

Together, Alex and Kelly are parents of three kids.

In an interview that will appear Thursday night, Kelly said, “The damages are a proclamation.”

“Enough with the propaganda,” I said. Americans won’t put up with those who spread falsehoods, hatred, and terror.

However, it’s uncertain if the eight families that sued Alex Jones would really get the money granted.

Kelly Jones affirms, “I do think they’ll see a dime of that money.” “I hope they get every single penny that they are due.”

“We will not stand for it when individuals benefit off the sorrows of others.”

Inside Edition will broadcast the whole interview with Kelly Jones at 7.30 p.m. local time.

Kelly’s comments follow the conspiracy theorist’s pledge that he is “not going away” and “not going to quit” only a few hours earlier.

The InfoWars presenter said that “the devil is coming after us” during a recording on Wednesday.

The conspiracy theorist said the “show trial” was a “fraud” and the parents of the minors were being “used” as he streamed live as the stream of penalties were read out in court.

He further said, “ain’t going to be happening, ain’t no money,” and claimed to be “bankrupt” despite efforts to conceal his fortune.

Despite Alex Jones’ assertions to the contrary, legal professionals warned that he would go to prison for “hiding his riches.”

The conspiracy theorist preemptively filed for bankruptcy earlier this year after transferring a $3 million mansion into his wife’s name.

On the seventeenth day of the case, a six-person jury declared that he would be required to pay $965 million to the 15 plaintiffs, which included families and an FBI agent.

It surpasses a 1997 case in which a brokerage business sued the Wall Street Journal and received $222.7 million in damages to become the biggest defamation suit damages amount in US history.

In the first of Jones’ three Sandy Hook-related trials, which was held in Austin in August, the defendant was found responsible for paying $49.3 million.

The total includes damages for mental anguish, slander, and defamation. Jones was also ordered to pay a sizable sum to the parents of Jesse Heslin, who was killed in the incident.

In Waterbury, Connecticut, only a few miles from the fatal shooting scene in December 2012, this trial was held.

The mother of Dylan Hockley, 6, who died in the incident, Nicole Hockley, expressed her thanks to the jury on Wednesday for ‘listening’ the families.

Except for one person who took the stand, everyone spoke the truth. Jones is the one who openly states that’s what he does,’ Parker added.

For giving him “the courage to finally find my voice, to fight, and to stand up to what had been happening to me for so long,” he expressed gratitude to his lawyers.

The verdict was “years in the making,” according to Dawn Hochsprung’s murdered daughter Erica Lafferty.

I wish I could simply call my mom and tell her about it at this huge occasion, like in every major event since the shooting, she added. I would describe to her how horrifying it was to see Alex Jones address the media outside, right here. Reliving the massacre while hearing accounts from so many families about their lost loved ones was heartbreaking.

She went on to say that she was appreciative of several media outlets for not running Jones’ trial-related words.

Midway through his first two-week trial during the summer, Jones, who was unable to make it to the hearing, filed for bankruptcy with his principal firm, Free Speech Systems.

As the sums of the compensatory damages were read out in court, some of the relatives of the Sandy Hook shooting victims became distraught.

As the figures were called out, Robert Parker, the father of Emilie, 6, was sobbing with his head in his hands, and David Wheeler, the father of Ben, 6, who was slain, was obviously trembling.

Outside of court, Nicole Hockley said that she had made an effort to interact with Jones’ supporters by claiming to be “searching for the good.”

“This sends the appropriate message that people are kind and that good does win,” she said. I appreciate you helping me to believe again in folks like that.

Parker was given a compensation amount of $120 million. Parker was previously accused by Jones of acting up a crisis for his audience.

Jones vented live on Infowars in response to the enormous payment, calling the decision a “joke.”

The conspiracy theorist added that the ruling was designed to ‘scare’ people and that he can ‘keep them in court for years’.

They want to intimidate us into not asking questions about Uvalde or Parkland, he said. We’re not leaving. No, we won’t give up.

He thanked his “supporters” and said he was attempting to “get out of the red” during a live broadcast before promoting “vitamineral fusion” from the Infowars shop.

I wish I could simply focus on being a daughter missing her mother after today and not have to worry about conspiracy theorists giving me death threats or worse.

Jones has criticized the trial in the past, calling it a “kangaroo court,” a violation of the right to free expression, and a “tyrant.”

His attorney advised the jury that any damages should be paid sparingly.

The evidence given earlier in the day by William Sherlach, whose wife Mary Sherlach was one of those slain, was reviewed by the jury.

Everyone who filed a lawsuit testified about being hounded by those who claimed the incident was staged as part of an effort to increase gun control.

Bill said at the court that he was concerned for the safety of his family and himself due to the venom of the shooting denialists and internet statements that implied his wife didn’t exist.

Additionally, the postings claimed that she lacked the qualifications to be a psychologist and that the shooting was a fabrication.

One parent testified in court over the summer that Jones’ remarks on the gunshot that killed his kid made his life “a living nightmare.”

Although the conspiracy theorist admits that the incident in Newton, Connecticut did occur, he or she continues to believe that the parents and relatives involved are promoting a cause opposed to free speech and gun rights.

At one point in the ongoing trial, Jones referred to the lawyer for one of the family as “an ambulance chaser” and told the court that he was “done saying I’m sorry.”

Daniel Barden’s father, Mark Barden, claimed in court that Jones and his podcast were to blame for the abuse the children endured.

The family informed the court that they received a letter claiming they defecated on Daniels’ grave from one of Jones’ fans.

Families have testified that they have endured threatening messages and malicious behavior throughout this trial and earlier judicial cases involving Jones’ statements and deeds.

Some parents and siblings said that people who believe they are all “crisis actors” have threatened them with death, raped them, and physically confronted them.

According to at least one family member who spoke publicly, conspiracy theorists sent them images of dead kids in an effort to frighten and startle them.

Ben Wheeler’s mother testified in court that she had a spooky experience at a conference on gun violence. Wheeler was the mother of another boy who died in the shooting.

According to Francine Wheeler, who testified before the jury, a woman approached her and called her a liar, saying the entire incident was a hoax.

A judge found Jones responsible for spreading the harmful lies among his sizable following in 2021.

At the time, the judge ruled that Jones’ actions hurt the parents and siblings who had filed the lawsuit.

Jones claimed for years that the killings were a complete hoax, but he later recanted, acknowledging during his Texas trial that they were “100% real.”

But just last week, he repeatedly asserted that his entire trial was “rigged,” calling the horror “synthetic.”

A number of civil lawsuits against Jones and Infowars have been dismissed by default in Texas and Connecticut after judges determined that he did not respond to discovery.

As Chris Mattei, the plaintiff’s attorney, urged the jury to “think about the enormity of the defamation” by pointing out that Jones’ alleged relatives “faked their 6- or 7-year-death,” old’s prosecutors requested Jones to pay the group $550 million.

Jones’ defense lawyer, Norm Pattis, told the jury that it was not their responsibility to render Jones bankrupt so that he would cease spreading falsehoods.

He provided testimony at the Texas trial that he was unable to pay any judgment exceeding $2 million.

Jones’ net worth, according to testimony in his prior lawsuit, was estimated to be between $135 million and $270 million.

Pattis declared that he will appeal the ruling and referred to it as a “dark day for freedom of speech” because he has “never seen a case like this.”

We disagree with the basis for the default and the court’s evidentiary rulings, he continued.

I have participated in more than 200 trials over the course of my career, and I have never witnessed a trial like this.

In a lawsuit brought by the parents of another child killed in the shooting, he will face a third trial in Texas, which could lead to the awarding of significant damages once more.

The jury awarded nearly $1 billion on Wednesday in compensatory damages, which were intended to make up for the plaintiffs’ losses.

Punitive damages, which are supposed to penalize the defendant for misconduct, have not yet been granted and in Connecticut are limited to the cost of the legal representation and the court proceedings.