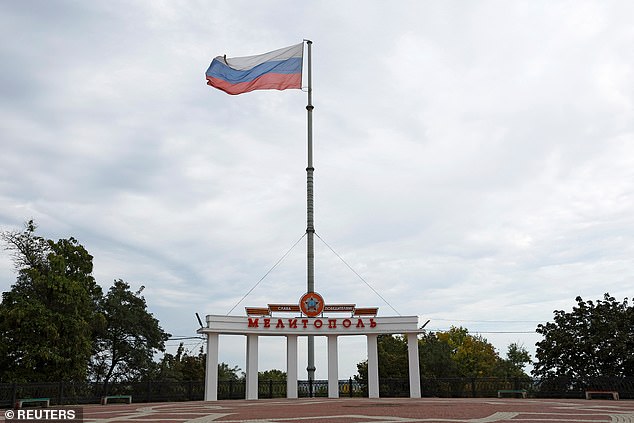 Four billionaires with a combined net worth of £6 billion, Moscow’s head of state in Kherson, and IMA Consulting, which the UK government termed “Putin’s favorite PR firm,” were among the targets.

The UK rejected the current elections in Russia-controlled Luhansk, Donetsk, Zaporizhzhia, and Kherson as “a flagrant breach of international law,” despite the Kremlin’s assurances that they are genuine.

“Sham referendums staged at the point of a pistol cannot be free or fair, and we will never recognize such results,” Foreign Secretary James Cleverly said in a statement.

According to him, “today’s sanctions will target those responsible for these phony votes as well as those who continue to support the Russian regime’s campaign of aggression.”

Sergei Yeliseyev, a vice admiral in the Russian navy who defected from the Ukrainian navy in 2014, who served as Moscow’s representative in the Ukrainian province of Kherson, was one of those included in the list of those who received sanctions.

Targeted individuals included Goznak, which the statement said had a monopoly on producing Russian official papers in the annexation regions, as well as figures supported by Russia in Donetsk, Lugansk, and Zaporizhzhia.

According to reports, the PR company IMA was tasked with promoting the implementation of the results of the ballots in the fore temporarily occupied regions and presenting them as legitimate in Russia.

Since Putin gave the order to invade Ukraine in late February, Britain has already sanctioned more than 1,200 people and more than 120 Russian businesses, including more than 120 oligarchs.

The “Kings of Russian real estate,” God Nisanov and Zarakh Iliev, have been added to the list of oligarchs who have been sanctioned.

The Kievskaya Ploshchad Group, a significant construction firm operating across Russia, has contributed to the couple’s combined worldwide net worth of £2 billion.

Dmitry Peskov, the press secretary for the Kremlin, informed reporters in Moscow earlier today that the date of the formal admission of additional areas to Russia will be revealed soon, according to TASS.

The declaration was made despite the fact that certain parts of the occupied Ukraine’s referendums, where people will be asked to decide whether to join Russia, won’t be completed until Tuesday.

Peskov said in a coded statement that “[the announcement] would be preceded by a certain process related to parliamentarians.”

“We will notify you as soon as possible.”

The Russian-controlled areas of Luhansk, Kherson, Donetsk, and Zaporizhzhia will hold democratic referendums that, according to the Kremlin, would demonstrate the residents’ overwhelming desire to join Russia.

While early exit polls indicate that almost 100% of respondents are in favor of acceding to Russia, video footage that has just gone viral on social media shows armed thugs going door to door urging citizens to vote.

While everything is going on, Kiev and its friends in the West have blasted the referendums as being rigged and nothing more than a phony pretext for annexation.

In the areas of Luhansk, Kherson, Donetsk, and Zaporizhzhia, voting on a formal accession to Russia got underway on Friday. Voting is expected to go until Tuesday.

Before the so-called referendums began, many locals left the areas out of fear that they would be compelled to cast a ballot or may wind up being drafted into the Russian army.

Others have spoken of hiding behind locked doors in an effort to avoid being confronted by armed troops canvassing neighborhoods to solicit ballots.

Numerous polling stations were secured by threatening, highly armed Russian mercenaries from the notorious Wagner Group, as shown in a deluge of videos and photographs released on the Telegram messaging app and social media.

Other videos showed troops carrying automatic weapons walking around neighborhoods urging people to vote as pro-Russian billboards could be seen along the streets.

The assertion that referendums in the occupied Ukraine might produce any outcome other than a resounding majority in favor of joining Russia is refuted by Peskov’s statement.

It happened only days after a Russian lawmaker informed TASS that the seized territories of Ukraine will most certainly be annexed by Russia on September 30. This is additional proof that the outcome of the referendum is a given.

Putin could participate in the formal announcement, according to the unidentified lawmaker, while Yaroslav Nilov, the deputy leader of the Liberal Democratic Party of Russia (LDPR) faction, asserted senators were required to submit three negative results from PCR tests in order to “take part in an important event on September 30.”

A little more than ten years ago, the Kremlin tried to justify a grab of Ukrainian land by staging phony referendums.

In order to legitimize annexing the Black Sea peninsula in 2014, it organized a hurriedly convened referendum in the Crimean area of Ukraine. The majority of the world condemned this action as illegal.

Authorities in Ukraine and the West have already said that they would not accept the results of this week’s vote if they favor Russia.

However, this week, like Kiev and Western nations, Turkey and Kazakhstan also denounced the practice.

Kazakhstan is one of Russia’s closest former Soviet allies and a member of the Collective Security Treaty Organization, an organization similar to NATO that provides security for former Soviet countries.

The Black Sea Grain Initiative, a crucial deal between the warring states enabling for the safe shipment of commodities to avert a worldwide food catastrophe, was reached thanks in large part to the efforts of Turkey, who has emerged as the most successful mediator between Ukraine and Russia.

According to ministry spokesperson Aibek Smadiyarov, “Kazakhstan proceeds from the principles of geographical integrity of states, their sovereign equivalent, and peaceful cohabitation.” Kassym-Jomart Tokayev, president of Kazakhstan, has consistently demanded that the Ukrainian crisis be resolved in accordance with the United Nations charter.

We have informed Russia that we do not recognize the annexation of Crimea, he said.

“We have voiced our worries on the referendums in Kherson, Donetsk, Luhansk, and Zaporizhzhia. We made it quite plain that we would not accept them.