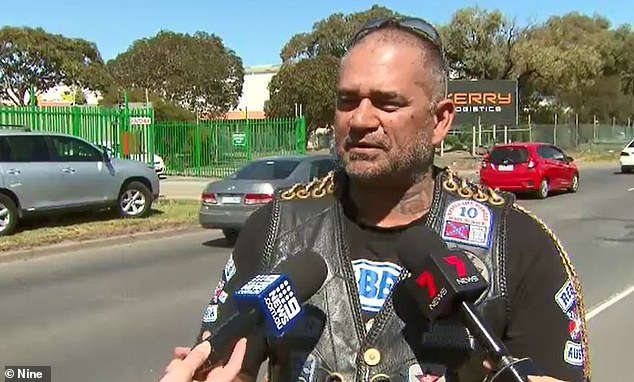 Controversial After confessing to a “brief” relationship with a Rebels bikie boss who is the uncle of AFL star Dustin Martin, Greens senator Lidia Thorpe resigned from her position as the party’s deputy leader in the Senate.

Ms. Thorpe stated on Thursday that she met Dean Martin, the former president of the Rebels Victoria chapter, via the “Blak activism” group, and that they started dating in early 2021. Her leader Adam Bandt called this revelation “an error of judgment.”

She said in a statement to the ABC on Thursday afternoon, “We remain friends and have worked together on our common interests pushing for the rights of First Nations peoples.”

She left her high position in the party hours afterwards, although she is still a member of parliament.

The connection between Ms. Thorpe and Martin came to light as a result of allegations that her staff had voiced concerns about it given that she served on a joint parliamentary law enforcement committee.

The committee was given private briefings on illegal motorcycle gangs.

Ms. Thorpe said in a statement that she had “made errors” and “not used sound judgment” in her departure.

She remarked, “I will now consider this and concentrate on my significant portfolio job, including advocating for First Nations people.”

Senator Thorpe’s resignation from the Greens leadership team was requested by Mr. Bandt, who was clearly furious at the news conference on Thursday.

As the leader, Mr. Bandt said, “I expect my senators and MPs, particularly those in senior positions, to use good judgment.”

Senator Thorpe’s omission to disclose her relationship with Mr. Martin to me at the very least showed a serious lack of judgment.

I talked with Senator Thorpe, and she assured me that she had never shared any sensitive material with any committees or violated any regulations in the course of her job. To date, no one has made any claims to the contrary.

But that is insufficient. It was obvious that this may be seen as influencing her job, and she made a mistake by not disclosing it to me, at the very least.

The ABC claimed that despite employees pleading with her to disclose the connection to Mr. Bandt, Ms. Thorpe had chosen not to.

He was only made aware of it after inquiries were made about it. Staff employees expressed concerns about the connection to the Parliamentary Workplace Support Service, an independent body whose mandate it is to look into workplace problems at Parliament House, out of fear that they would be seen as a conflict of interest.

A committee that Ms. Thorpe served on received testimony regarding biker gangs as part of its investigation into the internet trade in illegal substances. This year, she no longer served on the committee.

Naturally, I’m worried about illegal motorcycle groups’ criminal activity in general. However, Mr. Martin was no longer a part of that milieu when we met, the senator told the ABC.

She said that she always handled the committee’s given materials with confidentiality.

After his brother, Dustin Martin’s father Shane, was deported to New Zealand due to his connections to the bikie movement, Martin resigned as president of the Rebels Victoria branch in 2018. He’s never been convicted of a crime.

According to what is known, Ms. Thorpe told two separate members of her staff about the connection in May and June of last year. One of them confronted her about it in August 2021.

According to the ABC, the staff member had seen that secret records on the Australian Federal Police’s monitoring of illegal motorcycle gangs had just hours earlier arrived at Ms. Thorpe’s Melbourne office.

Later, the staff member noted in a work journal that the senator should talk with the leader’s office because she was in grave danger of being blackmailed, especially if someone found out.

Ms. Thorpe recently came under fire for allegedly yelling angrily at the co-chairs of the First Peoples’ Assembly of Victoria, Marcus Stewart and Aunty Geraldine Atkinson, at a meeting in a committee room at Parliament House on June 22, 2021.

According to reports, Ms. Atkinson, who is in her 70s, was so alarmed by Senator Thorpe’s actions that she later asked the parliamentary nurse for help.

a mistake in judgment
On Lidia Thorpe’s resignation, Adam Bandt

David Mejia-Canales, a former chief of staff for Ms. Thorpe who was present during the meeting, subsequently expressed regret for not adjourning it sooner after Senator Thorpe’s “appalling” behavior.

According to Mr. Mejia-Canales’ email, which was quoted in The Sydney Morning Herald, “The behaviour that I observed at that meeting was by far one of the most unprofessional performances I have ever seen, not only throughout the duration of my career, but in my life.”