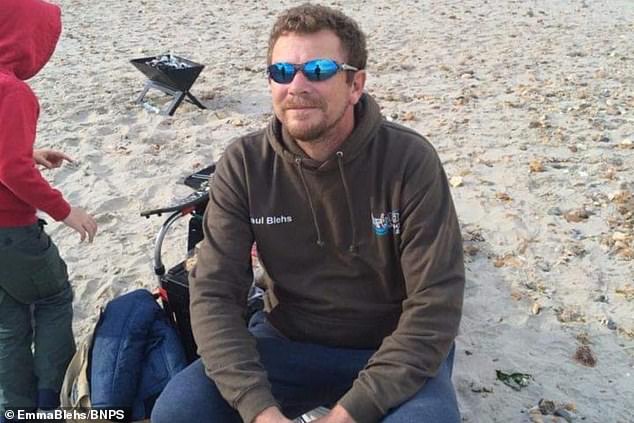 After her husband passed away from a devastating heart attack, a distraught widow claims that she was kept on wait for ten minutes before being connected to the ambulance service.

Emma Blehs, 48, said that after being placed on hold by a 999 operator, she attempted to resuscitate her dying husband Paul for 22 minutes.

On speaker phone, the mother-of-two from Bournemouth, Dorset, desperately attempted to revive the 47-year-old.

22 minutes after Mr. Blehs stopped breathing, an ambulance finally arrived at the couple’s house, despite the fact that they were just two miles from the hospital.

Before bringing him to the hospital and putting him on a ventilator, paramedics worked on him for an hour.

The father of one, however, regrettably never recovered consciousness, and his life support was eventually turned off.

Now that it has been more than four months since his death in May, his wife is seeking answers from South West Ambulance Service.

The Royal Bournemouth Hospital is just a three-minute drive away for Mrs. Blehs, a veterinary nurse from Bournemouth, Dorset.

She has asked for a copy of the tape of her 999 call in an effort to determine what went wrong.

The 48-year-old mother of two, whose first husband had passed away from a heart attack six years before, claimed Mr. Blehs had always been in good physical condition prior to his tragic heart attack.

It went wrong, she said, because I waited so long on hold.

For almost two minutes, the phone rang nonstop. I replied, “My husband’s heart has stopped and he isn’t breathing,” when someone responded.

I should have been more explicit. You don’t put that person on hold. The call taker promised to connect me immediately, but after a few minutes he would return and say, “Sorry, we’re still trying to connect you.”

I spent the whole time attempting to revive my deceased spouse.

‘I spent 22 minutes on the phone attempting to revive Paul. The 999 phone operator repeatedly placed me on wait for ten of those minutes.

I reside three minutes away from the hospital, as indicated by blue lights.

“I know as a vet nurse myself that with lack of oxygen to the brain, your organs start to die down within six minutes – therefore I knew he wasn’t coming back,” the person said.

Mrs. Blehs said, “I simply want them to tell me why. I don’t want heads on a block because nothing will bring him back.

The paramedics performed a fantastic job, but the harm had already been done. Additionally, the call handlers were not at fault; rather, the system has to be changed.

Change is required since Paul died as a consequence of a delayed emergency response; this wasn’t a fractured leg.

“The ambulance service performs fantastic job, but I don’t want anybody else to experience this,” the patient said.

A SWASFT representative expressed their profound sympathies to Mr. Blehs’ family and friends.

We are investigating this issue internally at the moment, and after we have finished, we will share the results with his surviving family members.

‘For many months now, the whole health and social care system has been continuously strained. Due in part to emergency department transfer delays, our performance has not yet reached pre-pandemic levels.

Mr. Blehs, a well-known fisherman who died on June 23 and was remembered by his wife as “a beautiful guy,” was mourned by 200 people.

He is survived by his wife, son, and two stepdaughters from an earlier marriage.

»After her husband’s heart attack, widow waits 10 minutes for ambulance«