Skip to content
Go Home «» News «» All News «» After being fired, Karly Pavlinac Blackburn sends Nike her CV on cake 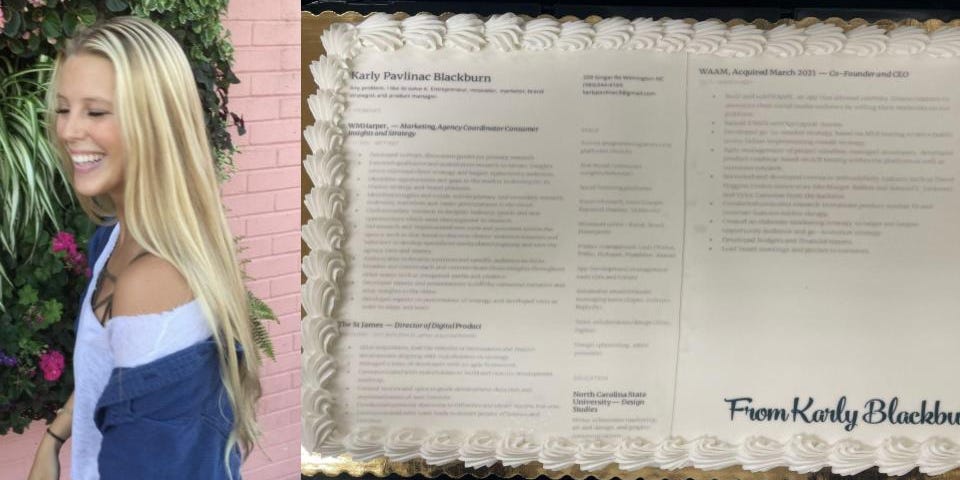 After being fired from her corporate job, Karly Pavlinac Blackburn got the notion to put her CV on a cake and mail it to Nike.

Blackburn, 27, told Insider, “I was totally prepared to purchase this cake and simply have it sit in some weird area someplace.” But thanks to a friend, a bakery, and a committed Instacart driver, the operations expert she connected with at Nike’s Valiant Labs would get her CV cake.

Valiant Labs, a business incubator run by Nike, is where Blackburn, a Wilmington, North Carolina resident seeking for a job in product marketing, claims to have found it. She claims that Valiant Labs “resonates” with her experience.

Despite learning that Valiant Labs was not currently recruiting, Blackburn told Insider that she still wanted to put her name on their radar after chatting with operations expert Mac Myers about the firm.

Blackburn received the idea for a cake resume from a former coworker who advised her to think creatively if she wanted the employer to take her seriously.

She said that after some investigation, she learned that a promotional event will be held in Beaverton, Oregon, at the beginning of September.

What better place to deliver a cake than to a party, I thought? said Blackburn.

She placed an order for the cake and instructed an Instacart driver to pick it up and bring it to Beaverton, Oregon’s Nike World Headquarters.

Denise Baldwin, the driver, told Insider that she was “very astonished” to see the cake.

“Such a well-designed, thorough CV on a cake wasn’t exactly what I was anticipating. Never before have I seen it, “Baldwin said.

Blackburn informed Baldwin via the Instacart app during pickup that she had been let off from her previous job and was excited about the position with Valiant Labs on the day of delivery. She said that Baldwin made a commitment to her that she would deliver the cake to Myers.

With a cake and her eight-month-old kid in tow, Baldwin had to locate Myers while crossing the 286-acre Nike complex, a party, and other obstacles.

Baldwin stated, “Not only was it incredible for me to be on campus, but to learn that I was there that day when all that things was going on was even more like, ‘Wow, I can’t believe this is happening.'”

To ensure the cake reached Myers, she spoke with security and exchanged emails with Blackburn. Baldwin said that in order to find Myers, she was given a map and driven about the campus before being informed that he was in the Lebron James building. Baldwin said that security had suggested she leave the cake at the front desk, where they would personalize it with his name.

She said no. She took the choice to stay with her kid at the Lebron James building’s front desk until Myers was called down in order to ensure that Blackburn’s résumé reached Myers directly.

Baldwin reported that when Myers came, he described the cake as “neat” and declared he didn’t even want to cut into it.

She then informed Blackburn by photo that the mission was successful.

In order to give Karly piece of mind that her work was appreciated, Baldwin stated, “I forwarded it to Karly for a confirmation so that she knew that it got precisely to the person she wanted it to go to.

Blackburn added, “She held her kid in one arm and the cake in the other as she waited for him to come up and handed it to Mac and got the cake in the appropriate location. “I have no idea how she managed it. She was incredible. It’s absurd.”

Because that’s how she was taught, Baldwin told Insider, she handles every delivery with the same commitment and care.

Baldwin said, “I was simply doing what I typically do, and making sure that it got there. “But I believe I added a little bit more since I was aware that it was a CV and she was really interested in the position. And I was aware that I would want someone to put in the time and effort if I were to choose Nike.”

Baldwin and Blackburn have developed a long-distance friendship despite never having met in person. Blackburn allegedly promised to mentor Baldwin, a pregnant mother of three.

We communicate daily, according to Baldwin. She learned that I do everything on my phone and don’t have a computer, so she is sending me one.

Blackburn, who is still looking for a career that she is passionate about, said that since she posted about her cake on LinkedIn, she has spoken with a number of businesses. She said that her resilience was maintained by her continued confidence in the job search process.

The really cool thing about LinkedIn in a community when something gets posted and shared, Blackburn said, is that not just the people who were part of the Nike cake that day were affected, as other people hearing this story and knowing that they can go out and do whatever it is that they want to do.

Added her: “It’s difficult to see when you keep receiving rejections. But the reality is that you just need to believe in yourself, that you’re fantastic, and that you have a lot to give any organization or position for which you’re applying. The ideal fit will then occur.”

»After being fired, Karly Pavlinac Blackburn sends Nike her CV on cake«