Skip to content
Home » News » News » After a giraffe in the Czech Republic died, the zoo fed it to a lion, which sparked outrage 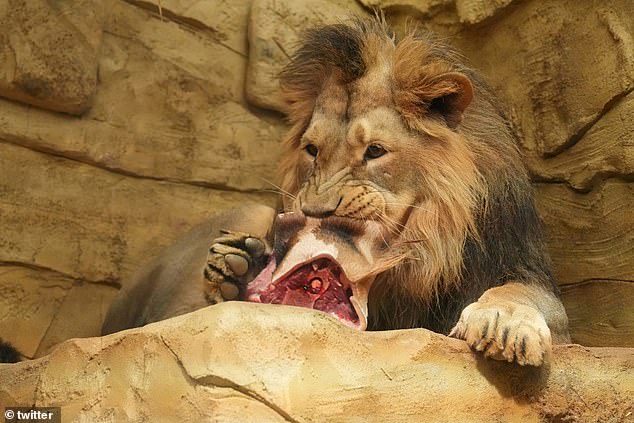 A zoo that gave one of its cherished giraffes to a herd of predatory animals following the giraffe’s death justified its actions by stating, “it would occur in nature.”

The Ostrava zoo in the Czech Republic was inundated with complaints after releasing a photo of a lion eating a dead animal with the announcement that its 19-year-old Rothschild giraffe had been euthanized.

árka Nováková, a spokesperson at the zoo, said, “The giraffe fell to the ground, was breathing hard, and did not get back up.”

Everything indicated cardiac failure. Due to the animal’s overall health, hypoxia, old age, and stress, we euthanized it.’

As in nature, the zoo said on Facebook: “Meat from creatures weighing more than 300 kilogrammes was fed to domestic animals and other carnivores.”

The picture swiftly drew criticism, with one distraught user commenting, ‘Very terrible… even though it’s nature’s law, the photo is out of place…’

Another added, “I do not believe the picture selection to be the happiest.” Perhaps a photograph of the same giraffe frolicking about the zoo.

“When announcing the death of a person, we will provide a photograph of him when he was alive, not showing worms crawling out of his eyes… because that’s natural, right?”

The zoo said, “The giraffe was already elderly; it was 19 years old.” Giraffes may live close to twenty years in the wild.

“In human care, life expectancy is often greater, whereas animals frequently reach twenty years.” The giraffe was in good condition until it was discovered that it had a weaker heart after it collapsed.

She was shot before being fed.

It went on to say, ‘We presently have two juvenile giraffes, a male and a female; breeding will continue and grow.’

Now, zoo supporters on the Internet have united in declaring the feeding “normal.”

One individual said, “This is life; what do you believe a lion does for a living?”

Even in confinement, the giraffe had a happy life, according to another author. It’s a good thing the meat was used.

Another commentator said, “The correct choice, at least it was implemented.” I believe it would be preferable to photograph a lion without a giraffe in the background. People read the comments, but it is not necessary for everyone to see it.

Meanwhile, another said, “It’s wonderful that the zoo can show the people the truth.” There is nothing to be embarrassed of!

Rothschild’s giraffes have a natural lifespan of 10 to 15 years, however in captivity they average 25 years.

The second most endangered subspecies of giraffe, just a few hundred remain in the wild in Kenya and Uganda.

»After a giraffe in the Czech Republic died, the zoo fed it to a lion, which sparked outrage«