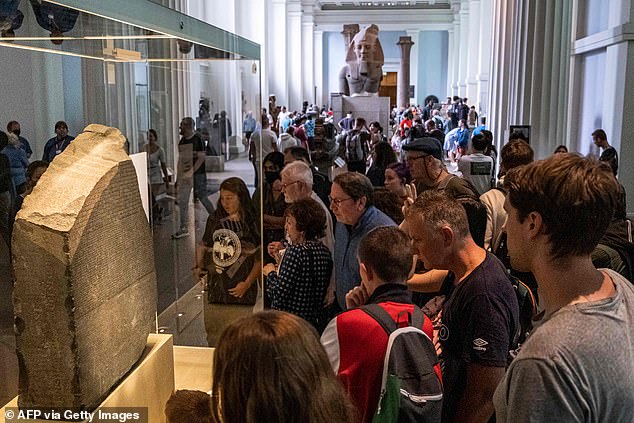 After spending more than 200 years in the UK, British scholars are demanding that the Rosetta Stone be sent back to Egypt.

Experts have signed a petition calling for the return of the priceless 2,200-year-old slab that allowed for the deciphering of hieroglyphs in 1822–1824.

The appropriate time to return it, according to Joyce Tyldesley, professor of Egyptology at the University of Manchester.

In the 200th year of the stone’s decipherment, she said, “Discussions may begin now to send it back to finish its journey. That wouldn’t do any damage.

She continued, asking why London rather than Cairo was the location, in an interview with The Sunday Times. Dr. Nicky Nielsen, a senior professor in Egyptology at the University of Manchester, repeated her comments.

He said that the stone will serve as a “major lure” for the Grand Egyptian Museum being constructed in Giza.

The news breaks as Liz Truss and the Greek prime minister are getting ready to discuss the possibility of Britain surrendering the Elgin Marbles, which are also housed at the British Museum.

In Egypt, a petition requesting its repatriation was started, and it has since been distributed around Westminster. The 760 kilogram (120 stone) slab was discovered by French troops in 1799 close to Rosetta.

After defeating the French in Egypt in 1801, the British acquired possession of the stone. Because it contains an edict written in hieroglyphics, demotic (the Egyptian language of the time), and ancient Greek, it became the key that opened the enigmatic pharaonic writing.

The 196 BC ordinance, which attested to Ptolemy V’s piety, was simply translated from the original Greek.

But it took French scholar and polymath Jean-Francois Champollion another 20 years after the stone’s discovery to interpret the other two languages, in part by recognizing names of persons in the writing.

Starting on October 13, the stone will be part of a special display at the British Museum.

The tale of how Egyptian hieroglyphs were deciphered 200 years ago is what we’re honoring, according to curator Ilona Regulski.

Additionally, it gives us a chance to place the narrative in a better historical perspective and to tell more thorough tales about the significance of the stone in the decipherment as well as how it got to the British Museum.

According to Miss Regulski, the stone was transported for its security during the Second World War and spent a “very little spell” in 1972 in Paris’ Louvre.

The 3,000-year-old illustrated Book of the Dead of Queen Nedjmet will also be on display, along with a collection of containers used to preserve the deceased’s organs. Additionally, the Louvre has lent the Aberuait mummy wrap, which has never been on exhibit in the UK.