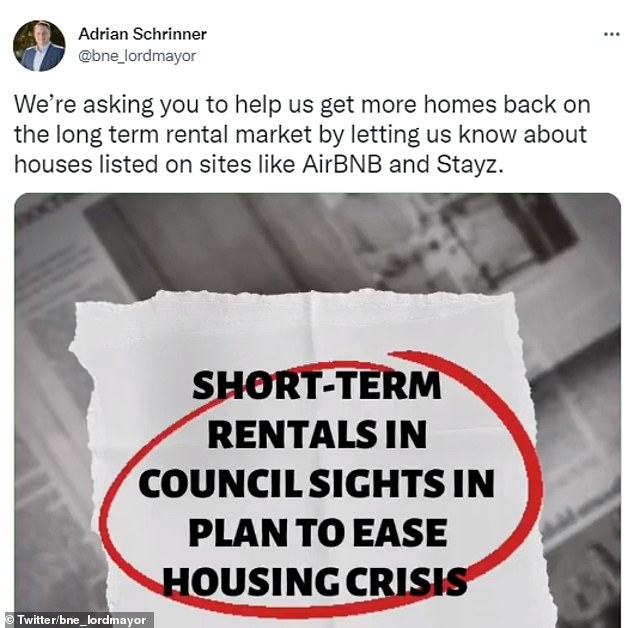 In an effort to combat an extraordinary housing shortage, a local council is pushing citizens to “dob in” homes they believe are being leased out as Airbnb-style accommodations.

On Tuesday, Brisbane Lord Mayor Adrian Schrinner urged citizens to report neighbors who they suspect are using websites like Airbnb, Booking.com, and Stayz to rent out their residences.

The ‘dob-in’ appeal, according to Schrinner, is an effort to increase housing supply rather than raise money after the state’s vacancy rate hit a historic low of 0.7%.

According to Cr Schrinner, “I’d be glad if this new rating category didn’t raise a single dime.”

Because not enough houses are being developed to fulfill demand, Brisbane is now experiencing a severe housing crisis.

“We want owners to put their houses back on the long-term rental market so they can be permanent residences,” said the organization behind the new rating category.

The next rates bill will come with a letter requesting homeowners to mark any properties in their neighborhood that they think are short-term rentals.

In a tweet published on Twitter on Tuesday, Schrinner requested assistance from the locals. By informing us of properties advertised on websites like AirBNB and Stayz, you can help Cr Schrinner put more homes back on the market for long-term rentals.

The Major continued by saying that the rate increase was intended to encourage owners of short-term rentals to put their homes back on the market for long-term rentals.

Queensland is experiencing a housing crisis, with the vacancy rate in Greater Brisbane reaching a record low of 0.7%, according to Cr. Schrinner.

“Therefore, we’re requesting individuals to put their houses back on the market for long-term rentals or pay higher fees that reflect the house’s commercial usage.”

Fiona Cunningham, chair of the finance committee for Brisbane Civic, said that the city wants short-term rental owners to’self-nominate’ rather than be revealed by neighbors.

According to Ms. Cunningham, the council will select homes that qualify as temporary housing using internet technological tools.

We like it if individuals self-nominate, which happens when a property goes from being owner-occupied to leased, according to Cr. Cunningham.

“However, Counsel may identify houses that have been offered on websites for short-term lodging for 60 days using technology that is now accessible.”

“We’re attempting to get homes back into the private rental market while making sure that those who are still being utilized for short-term stays pay their fair amount.”

Susan Wheeldon, the national manager for Australia and New Zealand at Airbnb, criticized the fee increase because it will affect Queenslanders who are just trying to get by.

Differential prices would put even more on regular people who share houses to make ends meet, according to a statement from Ms. Wheeldon.

If put into practice, “proposals like this affect visitors and the larger community who depend on short-stay housing to travel economically in Australia, especially for reasons like providing care and assistance for family members.”

After a wave of interstate migration brought 50,000 people to the state in just one year, Premier Annastacia Palaszczuk convened an emergency meeting last month to address Queensland’s housing issue.

The summit will be held in October after an initial roundtable of government and non-government parties on September 16.

The Queensland Housing Summit, according to the premier, will address housing issues brought on by recent floods, interstate migration, population growth, and development delays.

“Having a roof over your head is more vital than anything else; it’s a fundamental necessity, and the tales of those without a stable home are terrible,” stated Ms. Palaszczuk.

“It is shocking to see individuals living in their vehicles or being homeless in a contemporary economy where we have one of the highest economic growth rates in the country,” the speaker said.

“I want Queenslanders to know that I recognize this is a problem,” she said.

Ms. Palaszczuk stated that the conference will produce “important initiatives” to address the problem, including the provision of land and social homes.