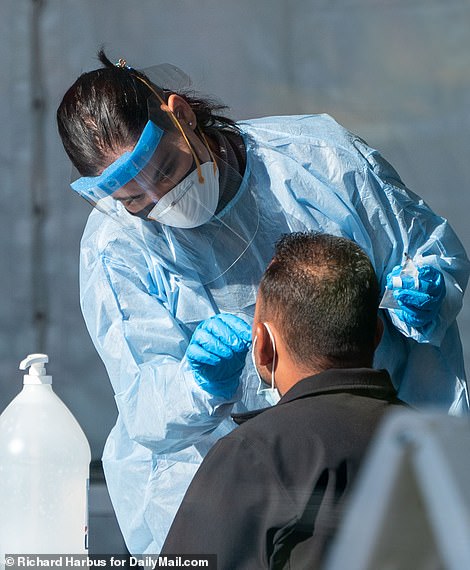 To least 500 male migrants are anticipated to arrive at Randall’s Island, where they will reside in a tented camp furnished with cots and entertainment centers with X-boxes, momentarily called Adams Tent City by Google Maps.

At least 20 municipal employees arrived by bus on the island on Tuesday morning to assist with today’s influx. Before midday, a stream of migrants began to arrive, and those who failed a covid test were not permitted to stay.

After arriving earlier today, the asylum seekers—mostly male Venezuelans—were being transported by bus from the Port Authority Terminal.

NYC Mayor Eric Adams has erected a number of enormous tents on the island, each of which is crammed with hundreds of beds, sofas, and rows of folding tables and chairs. Adams has refused to disclose the cost of operating the improvised shelter.

The majority of the migrants are lone Venezuelan males, and they will get three meals per day, snacks, limitless coffee supplies, and access to a “fluff-and-fold” washing service.

There are cafeterias, phone banks, washing facilities, and entertainment centers with luxurious sofas where the refugees may play X-Box games or watch TV in the tents on the island.

As the public got its first peek inside the facility on Tuesday, Emergency Management Commissioner Zach Ischol said, “This is a place folks can come rest, relax, and put their feet up after the adventure they have been on.”

The city will provide an hourly bus service to Manhattan, allowing the migrants to come and go as they want. The facility will, however, have a curfew starting at 10 p.m.

Adams proclaimed a state of emergency in New York City earlier this month and requested federal aid to meet the $1.3 billion in housing costs for the city’s almost 20,000 existing asylum seekers.

In the next days, at least 500 migrants are anticipated to arrive at the facility, according to NYPD Officer Mark German who spoke to DailyMail.com.

We don’t have a precise count of the migrants coming today, but we are anticipating 500 overall. He remarked, “It may be anytime in the next several hours.”

“Our job is to assist them with getting off the buses, assisting them with their baggage, and directing them to reception and the covid area to be tested once they are inside.” They’ll go to the isolation trailers if the test is positive.

German said that for the next six months, 10 to 14 members of the national guard would protect the camp around-the-clock in eight-hour shifts.

According to Google, the building had the name Adams Tent City on Google Maps for a short while until it was changed.

The official told DailyMail.com that “our automated algorithms and skilled operators work around the clock to monitor Maps for suspicious activity, including inappropriate modifications to locations.”

We also make it simple for individuals to report improper material and deceptive locations, which helps us maintain the accuracy and reliability of the information on Maps.

Since it was announced, the migrant shelter has been the subject of heated debate, with detractors claiming that it is an unnecessary waste of tax money for the people of New York.

The project initially started construction at a site in the Bronx, but after 10 days of work, it was abandoned owing to drainage problems and the facility was transferred to Randalls Island.

Adams has declined to comment on how much money the city lost as a result of the site relocation.

“We will provide you the pricing once we get the precise figure.” In a news conference held earlier this month on the defense, he said, “We don’t do anything early so you can say, “Eric misled on the expense.” “So, we’ll provide it once we have it,” was the decision.

Regardless of the justifications, many people said the endeavor was unduly costly.

According to authorities, the city intends to transport single males to the facility after they reach at the major Manhattan bus station and hold them there for a few days while deciding what to do next. Hotels and shelters all around the city are housing families with children, including the $400 per night The Row in Times Square.

According to Emergency Management Commissioner Zach Iscol, “We needed a different type of operation that gave us the time and space to welcome people, provide them with a warm meal, a shower, and a place to sleep, to understand their medical needs, and to really work with them to figure out what their next step is going to be.”

The white, plastic-walled tents also include an entertainment area with TVs, video games, and board games where migrants may consult with caseworkers about their next steps. Row after row of green cots with pillows, blankets, sheets, and towels are spread out in the sleeping area. The city claimed it would be able to double the tents’ sleeping capacity if necessary.

Just one month ago, Adams revealed intentions to establish the facility and compared it to a modern-day Ellis Island. Ellis Island welcomed individuals who were “yearning to breathe free” more than 100 years ago, he added.

It is more obvious than ever that we are once again faced with a humanitarian catastrophe brought on by human activity. While other authorities have reneged on their moral obligation to assist newly arrived asylum seekers, New York City does not.

Adams said that the facility on Randalls Island is probably only the first of its sort to be built in the city and anticipated that soon there would be emergency shelters in “every municipality” and that they would appear “without notice.”

On October 12, Adams said during a press conference held at Yankee Stadium in the Bronx that the crisis will “affect” every neighborhood.

A total of 61,000 individuals are now using the city’s shelters, 20,000 of them are children, according to the mayor, who also emphasized that they are already almost completely full.